On April the 14th, 1912, at 2.20am, the HMS Titanic sunk in the North Atlantic ocean.  1500 of her passengers and crew perished at sea, including some notable English and Americans of the time.  It is a story which has been immortalised for many by James Cameron's 1997 blockbuster film (sensationalised as it was) but the part of the story which is not widely known was that there was another ship nearby that night which could possibly have steamed to the rescue.  The Midnight Watch by David Dyer is the story of the Titanic and the Californian.  Told from the point of view of John Steadman, a journalist for the Boston American, as well as various members of the crew of the Californian it begins as a quest for the truth and becomes an exercise in empathy. 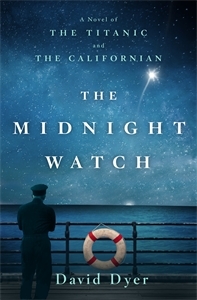 After the death of his infant son, Steadman becomes adept at writing moving journalistic accounts of tragedy and giving voices to the dead.  The Titanic tragedy is an opportunity to 'follow the bodies', and promises a lot of them.  When the offices of the IMM shipping company turns out to be a loose end, Steadman races to meet the Californian, a ship which was near the scene and had been instructed to look for bodies while the Carpathia transported survivors back to New York.  He sneaks on board, only to discover that no bodies have been recovered.  But this has taken him to an even bigger story.  The crew of the Californian are covering up something about that night, and John Steadman is determined to find out what it is.

Steadman is a quite likeable character, which is a testament to the skill of David Dyer's writing, because some of the things he does are deplorable.  His morals are questionable and he does some very shady things in order to trick people into talking to him.  Many of his actions belong to the old time movie journalists, but as the reader gets to know him better, they also realise that he is a devoted and heartbroken father, and that the reason he is willing to stop at nothing to get his scoop is because he feels he owes the people who have died in these tragedies, who are often poor or unfortunate in other ways.  The other characters who tell their parts of the story, Groves, Stone, etc. were less interesting as their voices were difficult to distinguish from one another -- they each saw or heard something vital to the story, and each held a piece of the puzzle, though no man held the whole lot.  But it was hard to remember whose voice I was reading, until, gradually, Herbert Stone began to distinguish himself.  I would have liked to have seen the Marconi boy become more drawn out, and I think Groves could have been dispensed with entirely, but overall, these felt like very minor things and didn't impact too negatively on my enjoyment of the novel.  I was also extremely interested in Harriet Steadman, John's daughter, who was a suffragette and a great source of strength for John, but she didn't get much time on the page.  It would have been an irrelevant change of plot to have Harriet take the wheel, but in a novel with so many male voices, I was drawn to the female perspective she provided.

Herbert Stone's backstory-- the tales of his rough childhood and his love for the novel Moby Dick-- made him a distinctive character and shed some light onto why he was so willing to listen to his Captain's orders against all reason.  But these stories were all told twice; once by the narrator as Herbert himself 'thought' of them, and again when Steadman met with Stone's wife and tried to uncover the truth.  I would have preferred for Mrs Stone to tell Steadman different stories, as it was a wasted opportunity to develop Stone even further.  The differences in character between him and the Captain of the Californian, Captain Lord, are crucial and the interplay of power in their relationship should have been more drawn out.

If it sounds like I disliked this novel, that's not what I meant to convey at all.  In fact, I loved it.  The ending, while experimental, worked nicely and brought tears to my eyes.  I spent a good half an hour after finishing this book last night looking up facts about the Titanic and the discovery of her wreck.  What was most striking about this book was the narrowing of the focus; what begins as a story of the media circus and the spectacle slowly becomes a sensitive exploration of a tragedy and a tribute to those who died that night.