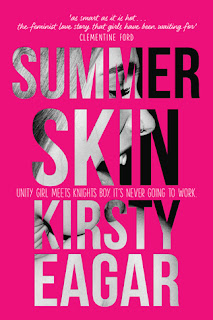 Widely hailed as showcasing a new way of writing about young women, Summer Skin arrived on the YA scene with a bang earlier this year, attracting jacket quotes from the likes of Clementine Ford, which tells you exactly what kind of badass female characters you might expect to find in the novel.  Summer Skin is the story of Jess Gordon, nicknamed 'Flash', a confident , fun, outgoing and mostly hard-working economics student at a University in Queensland.  Jess lives in a residential college known as Unity, which is a co-ed college with a reputation for having alternative residents.  Another college, Knights, which is mostly inhabited by spoilt, cliquey rich boys, has earned the reputation for being home to the University's contingent of male chauvinist pigs after an incident the year before which involved one of Jess's closest friends.  She's out for payback, and she's enlisted help.  What ensues is dangerous, sexy chaos.

When I say sexy, I mean sexy.  This is no book for young readers, and contains more explicit sexual content than some novels for adults I've read.  (And now that I've mentioned sex, it's hard to make that sound like normal fiction books rather than Fifty Shades of Grey or Maestra!)  But what's different about this book and the way that it uses sex is that the explicit scenes in Summer Skin are not just there to entertain you.  They're there to start a dialogue, first of all about consent, and second of all about women's agency in their own sexuality.  The two main characters in this book, Jess and Mitch, often discuss the fact that Jess has needs and that she shouldn't be made to feel somehow ashamed for looking after her needs in the same ways that boys are allowed to do without comment (largely).  Mitch has his moments of almost being as bad as his Knights counterparts, behaving like some sort of drunken monkey and treating the women around him like objects, but he also seems to understand Jess's point of view, and he has already begun to have his doubts about the ways his mates treat people.

There are more than a few similarities between this book and Pride and Prejudice, and I don't just mean because Mitch is from money and because they meet at a party.

One thing I really enjoyed about this book was the use of music throughout the scenes, which provided a kind of soundtrack to read to.  The songs mentioned, either as titles for chapters or as songs playing on various people's iPods in the resident's rooms were varied, from indie rock to Aussie hip hop, and while I think maybe this might annoy people who don't listen to that kind of music and haven't heard of the songs, to me it had the effect of making me want to move in to Unity and hang out with Jess.  However, as someone who has never been through a residential college system even though one of our Unis in WA has one, it did take me a little time to get used to the setting and convince myself that these students were adults and not kids at rival boarding schools.  That was just me!

If you loved Looking for Alibrandi, you'll get a kick out of this book, but it comes with a warning, 15+
Labels: #loveozya allen and unwin book review book review Australia kirsty eager summer skin young adult