The Windy Season
Sam Carmody
Allen and Unwin, 2016 (I own a copy courtesy of the publisher)

When Elliot Darling goes missing from a small West Coast fishing town named Stark, his family face a long and uncertain wait to find out what happened to him.  Only his brother, Paul, seems to go on searching for Elliot, and this search sees Paul move to Stark.  There, he takes on work as a deckhand on his cousin's fishing boat, alongside a philosophical German named Michael.  The town itself is in decline, with families who have depended on fishing to make their livelihoods for generations now facing smaller and smaller hauls each time they go out.  At the pub each night, Paul is faced with surly, sometimes frightening men, hardened by the life in Stark.  This is a world where methamphetamine, bar fights and biker gangs are not out of the question...  Paul's coming of age against this backdrop is a plot worthy of early Tim Winton, but is written with a hopeful tone which makes The Windy Season a joy to read.

Paul is a fully-developed and original character.  It is through his interactions with people, particularly through his childhood memories of Elliot, that we begin to see a picture of his world, from his home and childhood in Cottesloe, to his conflicted feelings about his parents and particularly his father, right to the filthy and roiling deck of his cousin's boat, where Paul struggles to hold onto his stomach.  His relationship with backpacker, Kasia, reveals much about Paul's lack of experience in matters of the heart, and the lost way in which he wanders about the world without his brother to guide him.  Over the course of the book, Paul is forced to find out what kind of man he will be, if Elliot's brother is not to be the only way he will define himself.  It is not an easy journey for him to take.

The story is told through Paul's eyes, interspersed with short segments in first person, which show a gang of bikies slowly closing in on our main characters.  While I found the change of point of view from third to first person a little jarring, these segments did give some perspective on the novel and its events.  Without giving away any spoilers, I enjoyed what these interludes revealed, but I also think the novel could have worked perfectly fine if these sections were taken out.

All this aside, I devoured this book in a single sitting, hardly moving for the entire day after cracking its spine.  The writing was sharp and fresh, and it was easy to see why Carmody was shortlisted for this piece in the Australian/ Vogel award the year that the prize was won by Christine Piper for After Darkness.  If the two books are anything to judge the future of Australian writing by, we are in for exciting things indeed. 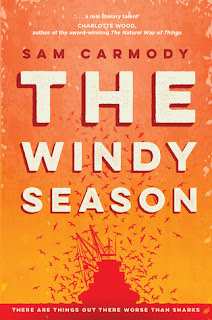