Looking Up/ Looking Down

Last week I was featured in a guest post on Amanda Curtin's blog, Looking Up/ Looking Down.  The post was an update on a series from two years ago on WA Women Writers to Watch.  You can check out the original post here and read about the other ladies from the series.  My guest post is reproduced below. 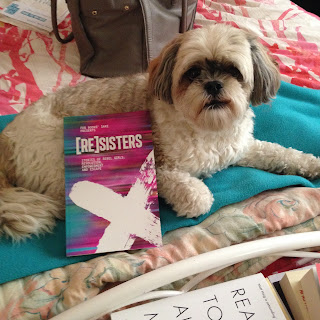 What a difference two years makes.

Since I was featured as one of Amanda Curtin’s WA women writers to watch out for, a lot of things have changed.  Some of them were good changes—such as, for example, having short stories published in two anthologies.  My story ‘A Thousand Words’ was published in the UK in a collection called [Re]Sisters, and I was lucky enough to have a story called ‘The Sea Also Waits’ selected by editor Laurie Steed to be a part of the Margaret River Press Anthology, Shibboleth and Other Stories.  When I last wrote for this blog, I was about to begin my time as one of three Young Writers in Residence at the Katherine Susannah Prichard Writers Centre—those ten days were probably some of the most productive of my life, and I managed to revise a whopping 40 000 words of Between the Sleepers, a historical novel set in Fremantle between 1937 and 1945.  Part of this residency was a consultation with Amanda Curtin on the first fifty pages of my book, and her guidance on some of the early issues in the novel have really helped me clarify its direction as a whole.  In early 2016 I began sending the novel to agents, and started work on another project: finishing my Graduate Diploma in Professional Writing and Publishing, which I took online at Deakin University.

I currently have two writing projects on the go.  One is another historical fiction novel which I have tentatively titled The Turing Project.  It is the story of Clementine, a university student who throws herself into researching the wartime cryptanalyst, Alan Turing, after the suicide of her childhood best friend.  The novel alternates between Clementine’s story, set in the early 2000s and Alan Turing’s story, which many people may be familiar with now due to the film The Imitation Game.  This novel began its life as a NaNoWriMo project back in 2009 (National Novel Writing Month, where you challenge yourself to write 50 000 words in 30 days).  Writing about people who existed and whose stories are well known presents a challenge in itself, but I am enjoying throwing myself into this world and learning about my new characters.  My other writing project is a collection of short stories, which is currently titled Well-Behaved Women.  It so far consists of ‘The Sea Also Waits’ (from Shibboleth and Other Stories), ‘Dora’ (Highly Commended in the 2016 Hadow/ Stuart Award for Fiction) and ‘Miss Lovegrove’, which was shortlisted for the John Marsden/ Hachette Australia Award for Young Writers at the end of 2015.  I’ve been a fan of short story collections for a long time, and I hope that my collection can find a place in the incredibly high standard of collections currently being published in Australia. 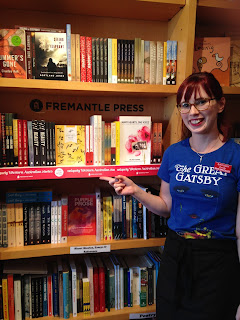 I mentioned that some of the changes were good, but some were also not so good.  For those readers who live in Perth, you may already know that my beloved Bookcaffe closed its doors at the end of June 2016.  While we’ve been seeing for a long time that the bookselling industry is changing, and that people are tending to buy more and more of their books at cheap online retailers, I never wanted to experience this downturn firsthand… but there I was, clearing shelves and adopting as many of the unsold books as I could so that I knew they would be going to a home where they would be read (eventually) and loved.  I still work in a bookish job—I am a sales representative at Westbooks, where I visit public libraries and make sure they have all the best new releases, and I am also doing freelance work such as teaching seminars at this year’s All Saint’s College Storylines Festival.  In general, despite some of the bizarre and depressing things that have happened this year, it seems like 2016 has been a year of progress for me, and one in which I have learned a lot about myself as a writer.  I think the most important thing is that I have finally taken on board a piece of writing advice that was given to me by Craig Silvey a number of years ago, something which has taken this long to become innate.  When I asked Craig what advice he had for someone who wanted to become a writer, his answer was something like this:  You don’t become a writer, you are a writer, every day, and in everything that you do.  That feels truer to me now than it ever has before, and I am just grateful to be putting my words on pages, never knowing if anyone will ever read them or not.
Labels: amanda curtin guest post looking up/looking down my writing