Extinctions
Josephine Wilson
UWA Publishing, 2016 (I own a copy, courtesy the publisher) 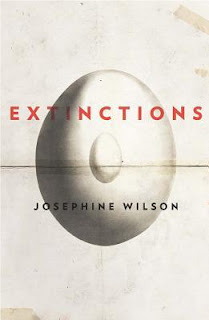 Extinctions by Josephine Wilson was the winner of the inaugural Dorothy Hewett award, which ran for the first time in 2015.  The award was created in response to a significant change to the funding and structure of the WA Premier's Book Awards, which were reduced to a biennial format in 2015.  It is a prize which aims to "support literary talent both in and related to Western Australia, and to celebrate the life and writing of a stalwart Australian radical."  To read more about the award, click here.

The novel follows Professor Frederick Lothian, once an engineer, now a lonely man living in a retirement community, regretting the mistakes he has made and the people he has isolated himself from.  Frederick is a fascinating, and not wholly likable character, one who is far-removed from the world of words and language-- Frederick is a scientist, a man who likes angles and physics and science and numbers.  He is logical, rather than emotional, which has meant he has not always been the most compassionate person. It's proven difficult for him to relate to others, such as his wife and children, or to the students he lectured.  (There is one particularly poignant scene in which Frederick tries to speak to a student in distress about Earthquake resistant building design, when all she wants to do is confess she is troubled by the human toll of the Earthquake he uses as an example.  He simply cannot relate.)  Yet the language of the book is beautiful, and just right, perfectly calibrated to suit this highly intelligent character, and capture the beauty of the Western Australian setting as it moves through recognisable landmarks such as Cottesloe Beach and King's Park.  It is a novel which is at times deeply thoughtful and moving, while at others it is acerbically funny.

Frederick, now living in a retirement community among people whom he views as being much more elderly than he is (thus belying a lack of self-awareness, I believe, for he frequently seems confused and contradicts himself) is forced to confront his past head on, as he faces the task of unpacking the detritus from his old life into a small apartment.  He is still hanging on to his deceased wife's belongings-- such as a half-knitted jumper-- that he cannot bear to give away; and yet when a care home calls to speak to him about his son, he hangs up on them.  It is not until he meets Jan, a chatty neighbour with troubles of her own, that Frederick realises it's time to stop feeling sorry for himself and deal with the lot he has been given.

If at first, the arrival of an off-kilter neighbour to show him the error of his ways seems a little familiar, read on, for the novel makes use of the situation well.  Far from being a two-dimensional tool for the writer to move the plot along, Jan is a character who must go on a journey of her own-- from being a retired teacher and a mother, to having to adopt her own grandson after the death of her son and the child's abandonment by his mother, she struggles alongside Frederick, and in many ways, is helped by him as much as she is a helper.  Jan is kind, and takes the time to get to know people, but she is not a pushover.  She makes no bones about telling Frederick what she really thinks.  But she's not his romantic interest and this is not a meet-cute. Jan is independent and strong-willed, and is far too busy for romantic entanglement-- after all, she has a small child to look after, and has to find a place to do it.  But she knows something that Frederick seems yet to have worked out-- you cannot simply outrun emotions, or reason them away.  And sometimes the best way to cope is with a little help from others.

This short novel packs in many themes, and pays tribute to quiet lives of suburban anguish, showing that you never really know what is going on in the lives of others.  From issues such as adoption, race, drug abuse, disability, fatherhood and masculinity, as well as being a measured treatise on so-called 'old age', Extinctions is a masterpiece.

I gave this book five stars.  I can't wait to read what the Hewett Award winner will be for 2017.

'He hated the word 'retirement', but not as much as he hated the word 'village', as if ageing made you a peasant or a fool.' Herein lives the village idiot. Professor Frederick Lothian, retired engineer, world expert on concrete, and connoisseur of modernist design, has quarantined himself from life by moving to a retirement village. His wife, Martha, is dead and his two adult children are lost to him in their own ways. Surrounded and obstructed by the debris of his life-objects he has collected over many years and tells himself he is keeping for his daughter-he is determined to be miserable. When a series of unfortunate incidents forces him and his neighbour, Jan, together, he begins to realise the damage done by the accumulation of a lifetime's secrets and lies, and to comprehend his own shortcomings. Finally, Frederick Lothian has the opportunity to build something meaningful for the ones he loves. Humorous, poignant and galvanising by turns, Extinctions is a novel about all kinds of extinction-natural, racial, national, and personal-and what we can do to prevent them.
Labels: #savethewapremiersawards book review dorothy hewett award extinctions josephine wilson UWA publishing WA writing