Harper Collins Australia (I own a copy, courtesy of the publisher)
9781460751312
Published March 2017 (Pre-order it from your favourite bookshop now!) 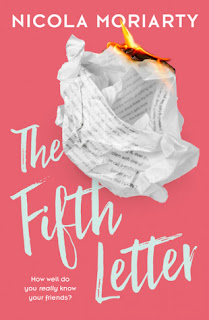 Joni, Deb, Eden and Trina try to catch up once a year for some days away together.  Now in their thirties, commitments have pulled them in different directions, and the closeness they once enjoyed growing up seems increasingly elusive.  This year, determined to revive their intimacy, they each share a secret in an anonymous letter to be read out during the holiday.  But instead of bringing them closer, the revelations seem to drive them apart.  Then a fifth letter is discovered, venting long-held grudges, and it seems one of the women is in serious danger.  But who was the author?  And which of them should be worried?

It's been a long time since I read a whole book in a single sitting, but that's what happened when I picked up The Fifth Letter last night.  Nicola Moriarty has crafted a near-perfect page turner in her latest offering (due out in just under two months here in Australia), keeping me up well after my bedtime to find out who wrote the fifth letter and who it was about.  The book fits perfectly into an increasingly popular sub-section of books which nestle somewhere between commercial fiction and thrillers, using the conventions of the crime novel to keep up a cracking pace while examining the ins and outs of the lives of ordinary, suburban characters.  One other author who is also writing books that belong to this sub-section is Nicola's older sister Liane, whose novel Big Little Lies is about to become an HBO mini-series.  But I'm sure many reviews are going to comment on this familial connection, so I'm going to leave that well enough alone.  This is a great book in it's own right, and for whatever reason people pick it up, whether it be the name of the author, the great premise or that stunning cover, readers are in for a treat.  It's a perfect novel to read with a glass of wine in your hand, lazing on the couch after a long day.

The initial frame narrative does seem a little contrived-- Joni Camilleri, the member of the group who both threw them together on the first day of high school and is responsible for keeping them together through an annual retreat, is visiting a Catholic Priest to give confession.  Except her confession is more like a narrative, and she's treating poor Father O'Reilly like her therapist.  Good thing for her, he used to be a psychologist before he was a priest!  (Sigh...) Plus, he's very interested in Joni's story.  And so was I.  It begins in high school, when Joni, determined not to sit alone at lunch, gathers up four girls one of the teachers identified as having surnames that start with 'C' who are all Scorpios.  Sure, she has to whine and complain-- and yes, even lie a little bit-- to convince these girls to sit with her, but it works.  While other students begin to refer to them as The C-Word Girls, it doesn't really matter, because a friendship that's going to last beyond high school has been formed.

Skip forward to the fateful holiday, June 2016.  We are still seeing most of the story through Joni's eyes, though she's changed a fair bit through high school.  She's always felt she was the 'least cool' of the group, the one who was always willing to have a try but wasn't particularly good at anything.  Been there, Joni.  Felt like that.  And while Joni may be slightly irritating in the way that she wheedles her friends to do things with her, and even lied to Trina in order to make her hang out with them at all, which I thought was pretty bad, the fact that she feels this way when she compares herself to her friends makes her extremely relatable.  Joni is the only one with no children and the last one to get married.  She feels like her career (she writes articles for a blog) is accidental, whereas the others are all successful.  So when the idea is put forward that they all write anonymous confessions (there's that word again) and read one each night in an attempt to regain intimacy in their friendship, we see that Joni thinks she needs it more than the others.  And then she is reminded you should always be careful what you wish for.

The revelations of what is in the letters is done masterfully.  There is never too much exposition as Joni works through which of her friends she thinks is the author, and the readings of the letters are interspersed with scenes in which the friends do fun holiday things, like walk to a beach in search of a secret waterfall, try abseiling and do an obstacle course challenge for over-thirties, which starts off as fun until it starts to get a little bit competitive.  Each letter contains revelations which colour the way the girls interact with each other in these challenges, and it's easy to see the characters changing, and having to confront the things they'd written down.  After all, if they weren't telling them to their oldest friends, they probably weren't dealing with them at all.

So when Joni finds the fifth letter, half burned in the fireplace, and works out it has to be one of the other three who wrote it, things are already getting tense.  She can't just show the letter to all of them, but she can't seem to work out who wrote it.  And the reader by this point has been given enough reason to believe it could be any one of them.

I'm going to try and keep the rest of this review spoiler free, but if you haven't read the novel yet and you want to, perhaps stop reading now.

It's when things start to get wound up that the book starts to rely a tad too much on conveniences.  I was annoyed by the solution to the puzzle because I felt like there was no way I could have guessed it, and that it was not exciting, or juicy-- it was just stupid.  That, for me, took a point off the novel, which otherwise would have been five stars.  Add to that a minor character turning up in a new role in the epilogue (seriously, read it and let's whinge about that in the comments, please) and you have an ending which has veered a little of course in an otherwise spellbinding novel.

While I'm still really happy to have read this book, because I really enjoyed it, my reaction to the ending is still smarting the day after.  And perhaps it's because when I started this book, I thought it was going to be like nothing I'd ever read before that the ending let me down so.  I think for many readers, this won't even be an issue-- perhaps my focus was just in the wrong place and the revelation didn't hit home, but I think it's more likely that in trying to use the old Agatha Christie technique of making the culprit the least likely suspect, the story sort of missed its mark.  It was more like the culprit was the most likely suspect but for what felt like a silly reason.

That being said, I think this book is going to appeal to a lot of readers and I am going to recommend it to friends because I did really enjoy reading it.  I would definitely read Nicola Moriarty again (and in fact I think I probably have some second hand copies of her other books...)