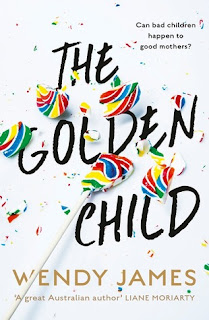 Blogger Lizzy's life is buzzing, happy, normal.  Two gorgeous children, a handsome husband, destiny under control.  For real-life Beth, things are unravelling.  Tensions are simmering with her husband, mother-in-law, and even her own mother.  Her teenage daughters, once the objects of her existence, have moved beyond her grasp and one of them has shown signs of, well, thoughtlessness...

Then a classmate of her daughter is callously bullied and the finger of blame is pointed at Beth's clever, beautiful child.  Shattered, shamed and frightened, two families must negotiate worlds of cruelty they are totally unprepared for.

Last weekend was a good reading weekend.  Straight off the back of devouring one of my most anticipated reads of the year (The Fifth Letter by Nicola Moriarty), I picked up another HarperCollins new release, The Golden Child, and leap-frogged it up to the top of my to-be-read pile.  I was in the mood for quick, gripping reads, books that would keep me flicking the pages to the exclusion of all other tasks.  I got what I wished for and then some!

Beth is an Aussie expat, living in the US because of husband Dan's job.  She doesn't have a green card and so doesn't work, meaning her days are filled with two things-- looking after her daughters, Charlotte and Lucy, and writing her blog about being an expat Mum.  The book is told in multiple perspectives: mainly we hear from Beth, but there are occasional chapters from other characters as well.  In between these chapters are excerpts from blog posts, some of which are written by Beth about her life and family, and others which are anonymous accounts of how to manipulate and bully others, written by someone identifying only as 'Golden Child.'  After an incident at the girls' school in which an 'initiation challenge' run by Charlotte (Charlie) and her 'gang', Beth begins to see her younger daughter a little differently.  Only twelve years old, Charlie is smart and popular and always seems to have some sort of gang around her, made up of other smart, popular, pretty girls.  But is she also a bully?  Beth is certain that this must all be a misunderstanding, and that Charlie is being punished for something that was truly an accident.

Dan announces that he's being transferred back to Australia, meaning Beth is now going to be blogging about being an ex expat.  She's excited to be moving back to somewhere close to where she's from (Sydney), but less excited to be moving close to Dan's mother in Newcastle.  And if Charlie's school is going to view her as a bully over a misunderstanding, perhaps the move has come at exactly the right time.

At their new school in Newcastle, Charlie (now wanting to be known as Charlotte) immediately finds herself a new 'gang', and Beth manages to find herself a friend too.  Andie is the mother of a girl in Charlotte's year, and so Charlotte and Sophie (known as Slowphie to her horrid classmates) find themselves hanging out.  After Sophie is introduced, we start to see the story through her point of view as well, and we are witness to the horrendous cyberbullying and physical bullying Sophie is subjected to.  The worst of it is, while some of it is anonymous, some of it is coming from Charlotte and her friends.  And because we never see the story from either Lucy or Charlotte's points of view, we never know if Charlotte is lying or not, though we suspect if she is, she's also the 'Golden Child' of the blog.

This is a fast paced and tightly plotted novel, with all the twists and turns perfectly set up for without letting you figure them out too early.  It's a novel that will appeal to readers of Liane Moriarty and Jodi Picoult's earlier work.  Beth's struggle between needing to be responsible for what her daughter may have done, and needing to be a good mother to her and give her the benefit of the doubt is intensely wrought on the page, allowing the reader to really consider what they may have done were they in her shoes.  The contrast between Beth and Sophie, who is mostly happy in her own skin except when she's being tortured by her classmates, really makes you consider which side you are on, and whether or not it's as straightforward as simply picking one.  While Beth is caught in the middle of it all, needing to mother Charlotte, support her friend Andie, and defend Charlotte to Dan, who seems increasingly convinced that she must be guilty, we see her character struggle and grow to new depths.  Meanwhile, Sophie's interactions online force you to realise that all of this is happening to a very young girl, and for many readers, her experience will be all-too familiar.

This is a complex story about bullying which takes a unique perspective-- that of the parent of the perpetrator, asking us if bullies always come from unhappy homes.  I highly recommend this book and gave it four out of five stars.
Labels: australian book review book review harper collins the golden child wendy james