When my copy of The Possessions arrived in the post earlier this week, I stopped reading what I was reading and started it right away.  I have been excited to read this book ever since I first heard it was coming out, late last year.  The Possessions is the story of Eurydice, called Edie, who works as a 'body' for the Elysian Society, a secretive organisation which offers the bereaved the opportunity to speak to their lost loved ones again.  The bodies' job is to channel those spirits.  Edie has been working for the Elysian Society for five years, longer than anyone else has ever stayed, and then she meets Patrick.  Patrick Braddock's wife Sylvia has drowned, and he chooses Edie to be the method he will use to speak to her again.  From the moment Edie first channels Sylvia, she begins to feel different.  Are the strong feelings she is experiencing towards Patrick coming from Sylvia, or from Edie herself?  As Sylvia begins to become stronger in Edie's mind, the reader must ask which of them will prevail. 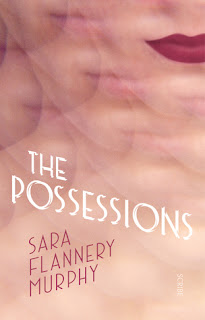 This is a stunning, genre-defying novel.  It has all the excitement of a thriller, the magic of a fantasy and the beautiful prose of a literary masterpiece.  Through Edie's point of view, we see the world Murphy has created to be her setting with a sense of cool detachment, which creates a growing sense of unease as she begins to realise nothing, and no one are as they seem.  Even Edie.  She is a strong character, likeable to us as the reader, even as she might be seen as distant and haughty by the others at the Elysian Society.  She is calm, intelligent, and though she tries to hide it, deeply saddened by events from her past.  Her guilt over what she did before she became Edie is heavily hinted at throughout the novel, and it appears to be her motivation for wanting to help her clients.

One of the major themes of the novel is the idea of disappearing, of one person's personality being completely subsumed by another's.  We see this in scenes where Edie switches back and forth between channelling Sylvia and being herself, failing at times to recognise herself, and at other times, staring into mirrors and searching for the intersections between the two women's faces.  Rather than being frightened by the idea that Sylvia might want her body permanently, Edie becomes obsessed with her, poring over photographs and even going so far as to investigate the woman's death.

Other characters in the novel are more concerned with the identity of the girl found dead in the building site nearby, whom the press are calling Hopeful Doe.  No one seems to know who she is, but her story captures the hearts of the public.

I don't know much about Greek mythology, but The Posessions appears to be thick with references to it.  All the bodies at the Elysian Society have assumed names.  Eurydice was the wife of Orpheus.  When she died, he attempted to retrieve her from Hades, but had to lead her out without looking back.  Another of the bodies, Dora, is named for Pandora.  In the legend, Pandora opened a box which let all the evils out into the world.  It is Dora's arrival at the Elysian Society which starts Edie questioning her life at the society.  Leander, a potential love interest for Edie before she knew Patrick, and another body, takes his name from the story of Hero and Leander.  Hero was a priestess of Aphrodite, and Leander a young man from across the strait.  He would swim across to tryst with her, but drowned one stormy night in the crossing, perhaps a reference to Leander's quashed chances with Edie.  Ana, whose full name we hear only once, is really Ananke-- the personification of inevitability, compulsion and necessity.  It is Ana who has been breaking the rules at the Elysian Society, Ana who shows Edie what's really going on, and Ana who gives Edie the way to be with Patrick.  The pills the bodies take in order to allow themselves to be possessed are called Lotuses-- a reference perhaps to the lotus eaters, a race of people who lived on an island covered in lotus flowers, who spent much of their time in a drugged state.  And the Elysian Society itself is a reference to the Elysian Fields, where the souls of heroes went to rest.  Much of this is from Homer's Odyssey, which admittedly I have never been able to read, though I like the stories contained within.

Quite simply, I loved this novel.  It had everything.  A love story, a puzzle, the supernatural, a connection with myth, beautiful writing and a character whom I felt connected with the whole way through.  It reminded me of some of the best Margaret Atwood, or of Anna North's The Life and Death of Sophie Stark, which I read and adored last January.  In some ways it also reminded me a little of what Audrey Niffenegger did in Her Fearful Symmetry, but much more satisfying (and a totally different plot.)  I have seen reviews online which say this sounds a little like Rebecca by Daphne Du Maurier, but it's not right to say that this book is like any others, because it is wholly original, wholly unsettling and wholly engrossing.  Go pick it up.  It's out February 7th.