Bloodlines
Nicole Sinclair
Margaret River Press 2017 (I own a copy, courtesy the publisher.) 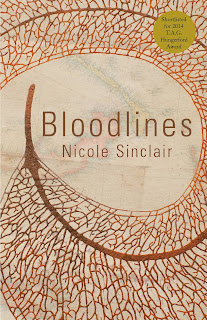 Nicole Sinclair's debut novel Bloodlines is set between Western Australia and a small island in Papua New Guinea.  It is the story of Beth, who heads to PNG to work with her father's cousin at a mission school, in an attempt to run away from the recent breakdown of a relationship.  From page one, we know that Beth feels guilty for this breakdown, and that she thinks she has done something very bad indeed.  It's a classic tale-- after a life changing event, the protagonist seeks healing through travel.  But there are many layers to Bloodlines besides this.  Told in a literary style, this is a novel which examines the clash between traditional and Western culture, the hangovers of colonialism, relationships, romance, and the power of female friendships.  Strong women abound in the pages of this book, from Beth herself, to her father's cousin Val, who has run the mission school for many years and lives a single but self sufficient life surrounded by the friends she has made, the island women in the compound such as Lena, who makes her own way in the world despite the objections of her brutish and mostly absent husband, and, in flash back, Beth's mother Rose, who leaves home and strikes out on her own in a new state.

The inclusion of the story of Beth's parents' courtship is an interesting stylistic choice, and one which works very well.  Clem and Rose's romance, while following less of a literary bent than the rest of the book, softens what could otherwise be quite a solemn and introspective narrative, and builds on the character of Beth by hinting at the kind of home life she has had and the kind of people who raised her.  While the reader knows from early on that Rose is not alive for most of Beth's life, as their love story progresses, it's easy to enjoy the gradual unfolding of Clem and Rose's courtship.  I admired the simple way that Sinclair wrote these scenes-- there was no purple prose to be found, no sighing, no hearts fluttering.  While the book probably could have functioned without these scenes, I found them a useful inclusion, and they went a long way to making this story an original and familiar one, grounding it in West Australian life.

Truth be told, I didn't expect to enjoy this novel as much as I did.  I've never been particularly interested in books about healing through travel (not since Eat Pray Love...) but Bloodlines won me over.  I found myself bawling in parts, and this is no mean feat-- the only times I seem to cry in books is when dogs die, so for me to cry over the death of a human character is an achievement on the part of the author.

I highly recommend you pick up a copy of this incredible book.

I'll be in conversation with Nicole Sinclair at the State Library of WA on Thursday June 8th at 5.30pm.  You can book tickets here.