The Hope FaultTracy FarrFremantle Press, 2017 (I own a copy, courtesy of the publisher) 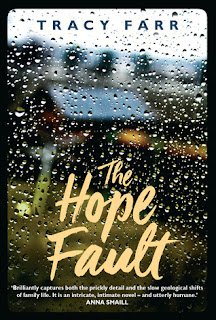 Australia seems to have a habit of claiming talented New Zealanders for their own when it suits them-- but if the talented Kiwi in question is Tracy Farr, I have no problem naming her a West Australian.  After all, she's originally from here.  Tracy's first novel, The Life and Loves of Lena Gaunt was longlisted for the 2014 Miles Franklin Literary Award, and remains to this day one of my favourite novels of all time.  Her second novel, The Hope Fault was released early in 2017, and I have been kicking myself for not getting to it sooner.  More experimental in style than The Life and Loves of Lena Gaunt, The Hope Fault tells the story of an unconventional family, who spend one rainy long weekend packing up a holiday house ready to sell it.

Yet, to sum up this novel in just that one sentence seems horribly wrong to me.  This is a slow burner of a novel, and one which takes its cues not just from polished literary fiction styles, but also the techniques of poetry and film, geology and-- dare I say it, cross stitching.  Farr's prose is beautiful, her imagery evocative without being overdone.  Some of her scenes last for less than a page, and yet she tells you all you need to know to get inside the heads of her cast of characters.

The novel takes place in three parts.  The first part is the first half of the long weekend, and we meet Iris Diamond, her son, Kurt and her ex-niece/ daughter of her best friend, Lucy, as they drive down to the old family holiday home at a place called Cassetown, somewhere in WA's coastal South West.  Cassetown is named for a geologist, Casse, who drowned on an expedition to the bay.  (Fairly certain that Cassetown is not a real place, though it seems to be based on real places.)  Joining them at the house are Paul (Iris's ex-husband/ Kurt's father), Kristin (the woman Paul left Iris for) and their as-yet unnamed baby daughter.  Much of the depth of this novel comes from the nuanced way the writer explores the complicated relationships between these characters, and the way that they have become family despite Paul's infidelity to Iris.

The second part of the novel follows the life of Iris's almost-100 year old mother, Rosa Golden, who was once Rosa Fortune, author of Miss Fortune's Faery Tales.  Rosa's life is told backwards, in 100 jigsaw pieces, some like confessions or diary entries, and others, letters.  The task of revealing the secrets that have shaped both Iris's and Rosa's lives in this reverse fashion would not have been an easy  one, but Tracy Farr has deftly managed to create tension in her narrative here and the result takes the reader into the third section of the novel searching everywhere for hidden meanings that not even the characters know.

Section three is the last two days of the long weekend, the aftermath of a large House Un-breaking party held by the Diamond clan to send their house off in style.  I won't say much about this part of the novel, as you need to experience it for yourself.

While I would have loved more of something like Lena, I enjoyed delving into the world of The Hope Fault, and was inspired by the craft of the novel-- the way that something as simple as a family weekend down south can be fertile ground for a literary fiction novel which I would not be surprised to see on prize shortlists in the near future.
Labels: book review fremantle press the hope fault tracy farr wa writers WA writing