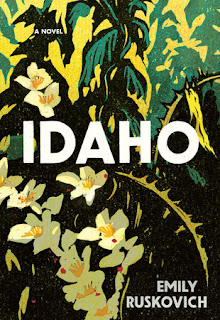 Idaho was one of my most anticipated books of 2017.  If I am being totally honest, it was largely due to the striking cover, and the fact that I was seeing it talked about everywhere in the online book reviewing community.  I saw special bound proofs of it on people's Twitter and Instagram feeds (part of a set of YA books being released this year, I think--- bizarrely, as it's not YA at all), and I even saw a few bloggers raving about it early on.

For some reason, I got it into my head that it was an historical novel.  Bizarre, given that American history is seldom something I am drawn to.  But it's not, it's a contemporary novel which switches back and forth over a period of something like forty years.  It's hard to boil down the premise of this book without over simplifying it.  This is a book which is told from multiple perspectives, shedding light on the aftermath of something really terrible that has happened in a particular family.  But, oddly enough, all of the points of view telling this story are removed either by time, or by proximity to the event, so that the perspective being given is really oblique.  The book begins first with a chapter from the point of view of Ann, who is now married to Wade, the father of the family who experienced the tragedy.  Ann was a music teacher at the school where the two girls went, and she taught piano to Wade before the incident.  Ann and Wade were attracted to one another, and in this section, Ann had begun to wonder if perhaps she was somehow responsible for the terrible incident-- I don't think it's spoiling anything to tell you what this incident is, but if you don't want to know, stop reading now.  One day, the Mitchell family go out onto the mountain where they live to chop firewood with their two little girls, May and June.  During this afternoon, the wife, Jenny, kills May with a hatchet and no one is really sure what caused her to do this.  In the confusion, June is left behind on the mountain and never seen again.

And the thing is, the book keeps reiterating the horrible fact of this event, but it doesn't provide us with any resolution.  It's not going to offer you any insight into what happened to June, or why Jenny really did it.  But what it does offer you instead, is a portrait of this really weird extended family, including cell mates and new wives, and then some segments in the past, that tell you a little about the period leading up the event and then the years that followed, without taking you to the event itself.  In the beginning of reading this book, when I was two chapters in and being talked to (in beautiful prose by the way, this woman can really write) by characters who were so peripheral that I felt like nothing was happening, I was tempted to give up this book.  And I thought of all the rave reviews I'd heard and thought to myself, no, there's got to be a payoff.  So I kept reading.

Was there a payoff?  Not of the sort I wanted, but at the same time, I didn't feel ripped off by the ending to this book the way I did with another book that never resolves its trauma which I really loathed-- The Little Friend by Donna Tartt.  I think the real strengths of this book are its prose and its characterisation, but if you go into it looking for plot you're going to get cross.  It's a book you have to read slowly, but if you're willing to do that, there are some real gems to be found.