Not a Review: Joiner Bay and other stories 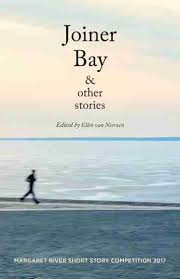 This is not going to be a review of the 2017 Margaret River Short Story Competition Anthology... because I have a piece in it, and that just wouldn't be fair.  This is just my thoughts... which resemble a review.

But I did want to say that once again, Margaret River Press have done an absolutely stellar job publishing this collection of stories.  From hundreds of entries, the team of judges (including head judge, Ellen van Neerven, who selected the shortlist) have whittled this year's selection down to seventeen different pieces, showcasing the breadth of talent in the Australian short story scene.

Winning piece 'Joiner Bay', by Brisbane-based writer Laura Elvery shows off exactly why Elvery is a name to watch.  With an impressive list of writing credits to her name, including the Griffith Review and The Big Issue, Elvery is a practised hand at the short form.  At the 2017 Margaret River Readers and Writers Festival, Elvery talked a little bit about the inspiration for her piece, which is about a teenage boy who has thrown himself into running after the suicide of his best friend.  But as much as she'd love to chalk it up to snippets of overheard conversations in cafes, it's plain to see from reading 'Joiner Bay' that it's 1% inspiration and 99% perspiration and talent for this writer-- the story reads effortlessly and is a perfect ending to a collection which spans topics of grief, aging, love, survival, confronting past traumas and other such themes.

This collection also features 'Sheen' by Else Fitzgerald, a speculative fiction piece about the not too distant future which took out second place in the competition this year, and 'Harbour Lights' by Leslie Thiele, winner of the South West Writers Prize, sponsored by ECU Bunbury.  In 'Harbour Lights', a clear sense of Bunbury is evoked on the page, as the main character navigates a routine dinner party that takes a nasty turn.

Other stand out stories for me were 'Oh, The Water' by Keren Heenan, which was simple and understated in the most beautiful way; 'Things to Come' by Charlotte Guest, a heartbreaking story about love and the terror of losing control of one's faculties; and 'Still Life with Dying Swan' by Gail Chrisfield, which left me close to tears.

I feel incredibly privileged to have a story in this collection, alongside these writers.

Joiner Bay and Other Stories is published by Margaret River Press, and you can find a copy at any good bookshop.  If they don't have it, make them order it!