The Love of a Bad Man by Laura Elizabeth Woollett 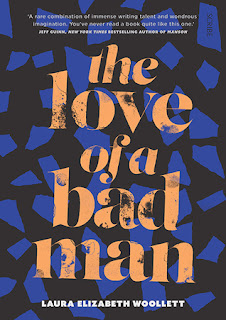 The Love of a Bad Man is the first collection of short stories from former Voiceworks editor, Laura Elizabeth Woollett.  It consists of twelve thematically linked pieces, each one told from the imagined point of view of a real female character who was the wife, girlfriend or lover of a notorious 'bad' man.  In this context, bad men generally tend to be killers, and the host of notorious names on the pages of this book range from Adolf Hitler, to Jim Jones, to Charles Manson, and -- closer to home, to Western Australia, where Woollett is originally from-- David Birnie.

This is a chilling collection, but in the most fantastic way.  From page one, Woollett shows that she is skilled at getting inside the heads of different characters.  Each narrative, told in the first person, has its own unique voice, and in many cases, it feels like you are being spoken to directly by the woman in question.  These women were after thoughts or offsiders in the original media reporting of most of these cases, at most, an interesting footnote in the case, or a sidekick to the man who was the brains behind it all.  But Woollett tells their stories in a way which gives them back agency, helping us as readers understand what may have motivated some of these women.  While each story is an interpretation and a fictionalisation, the stories have been meticulously researched and are written in such a way that makes them feel real.  The outcomes vary.  In some pieces, we see the women as victims, such as poor Janice, the girlfriend of Cameron Baker.  In others, they are perpetrators, just as sick and predatory as the men they claim to love, such as Veronica, the young playwright writing letters to Kenneth Bianchi, who was one half of the 'Hillside Stranglers' duo.  By giving them back this agency, Woollett turns the narratives of these women's lives on their heads.

The only story which fell flat for me was the last one, about Wanda Barzee.  It lacked some of the punch of the earlier stories, though I can't seem to put my finger on why.  Highlights of the collection were 'Blanche', which opened the collection, telling the story of Bonnie and Clyde, but also of Buck Barrow (Clyde's brother) and his wife, Blanche, and 'Martha'.  Though I wasn't familiar with every case in the book, it didn't affect my enjoyment of the pieces, and I was able to flick back to the glossary in order to look up who the narrator was and what they may have done.  It would perhaps have been useful to have these descriptions at the end of each piece, but that was only a very minor thing.

I loved this collection as much as someone can love a book about killers.  The writing was fresh and exciting and the characters were unlike any others I'd ever come across.  After a few weeks of reading some fairly average things, it was my absolute pleasure to give this book five out of five stars.
Labels: book review laura elizabeth woollett scribe short fiction short stories the love of a bad man