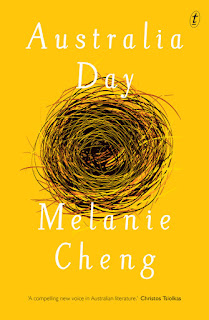 ‘After all, she had only looked to Cambodia when the hospitals in Melbourne failed to provide the validation she’d been searching for.  At the idealistic age of eighteen, she had chosen a career in health to make a difference, save lives, change the world, and Cambodia, with its reputation for tragedy, seemed like just the place to do it.’ (page 72)

This is part of the story ‘Hotel Cambodia’, one of the stories in the middle of Australia Day by Melanie Cheng.  I caught up with Melanie via email this past weekend to ask her all about this collection, and about the short story as a form.  'Hotel Cambodia' is the story of Melissa, a young Australian woman who goes to Cambodia to ‘make a difference’.  There’s a sort of double awareness in Melissa’s point of view.  On the one level, she’s there to save lives, to help the less fortunate.  But on a deeper level, one which the reader sees through the third person narration, but Melissa doesn’t really say out loud, she’s aware of the hypocrisy of going to a very poor country for the sake of validating her own need to feel helpful and selfless.  This is one of the ideas in Australia Day which was striking to me—the myth of the Western Saviour.  Do you think there’s a tendency in Australia to think that the traditional, White European way of live is ‘better’ than the way of life lived by some of the people living in neighbouring countries, or of those who migrate here from different backgrounds?  Was this something you were intentionally trying to explore in your work?

Melanie Cheng: In 2006 I lived in Cambodia for 5 months doing volunteer medical work with an NGO, and so to a great extent Melissa’s revelations are my revelations. When I arrived, a few people told me Phnom Penh was an NGO Disneyland because there were just so many different charities and organisations operating with little to no regulation. Most people I met had noble intentions but the Western Saviour phenomenon you refer to was a definite driving force. Once there, I felt ashamed for imagining that I—a junior resident with little experience—could have anything to offer the local Khmer doctors. Like Melissa, I was forced to acknowledge that my true motivations were more selfish and naïve than I was originally willing to admit. I don’t think the Western Saviour myth is an Australian construct, but rather a Western, developed world phenomenon. And it’s hardly surprising when the mainstream media and much of our popular culture perpetuates and celebrates these myths.

Your author biography states that you grew up in Hong Kong but you were born in Australia and live here now.  I know questions of identity are often complicated, but do you think of yourself as an Australian writer, a Chinese-Australian writer, or something else entirely?

Melanie Cheng: Funny you should ask that. I think perhaps the identity I’ve had the most trouble accepting is actually that of “writer”. When I was growing up, I had the perception that writers were fiercely intelligent people who suffered for their art. They weren’t people like me who worked a day job and spent their afternoons cooking and watching ABC Kids and hanging out endless loads of washing. I now understand that actually many writers are just like me, juggling multiple occupations and roles. As for whether I’m an Australian writer or a Chinese-Australian writer, I’m at peace with being identified as either. I remember hearing Christos Tsiolkas say that sometimes he wished he was described as the Australian writer who just happened to be Greek, rather than the Greek-Australian writer. I feel similarly, but until we get to the point that my heritage can be an incidental thing, I’m happy to be the Chinese-Australian writer.

Is there any one character in this book that you identify with the most?

Melanie Cheng: As mentioned already, ‘Hotel Cambodia’ is drawn heavily from my own experiences and so I do relate to Melissa a lot. During my medical training I frequently travelled to country Victoria and I can sympathise with Stanley’s feeling of dislocation and longing for home. The burnout and burden felt by some of the medical professionals in the book is also an experience very familiar to me.

Your characters are often outsiders, and that gives you the perspective you need to make comment on things about Australian life in a way that allows the reader to stop and think about them—usually things that just are, that aren’t questioned.  A strong example for me was in ‘Big Problems’, when Leila is thinking about the fact that her surname is Ayres—the same as the name that was  imposed on Uluru before we returned to using its traditional name. I was struck by this passage:

I admire the really gentle way that you worked this analysis into your work—was it hard to achieve the balance?  Were you worried at all about how the views of some of your characters might have been received?

Melanie Cheng: I don’t feel responsible for the behaviour of my characters. If stories are going to be true to life then there should be likeable characters and some less likeable, or indeed detestable, characters. Just because a writer includes a character in their book doesn’t mean they condone that character’s views or behaviours. Ellen’s character and much of her dialogue is based on things tourists and locals said to me during my visit to Uluru. I was horrified. Perhaps the most horrifying thing about it was the way people assumed, because of my Caucasian appearance, that I would agree with their racist views. Many of my stories centre around a moment of shock or personal epiphany such as this. I hope this gives the work a certain authenticity.

Another very strong theme which stuck out to me was the nostalgia a lot of your characters attributed to home.  But for many of them, the longer they stay in Australia, the less clear it becomes where home actually is—these characters exist in an in between space, where they exist in two cultures.  I’m sure that’s something a lot of people living here today feel.  What sort of things were you hoping your readers would take away after reading this book?

Melanie Cheng: As someone of mixed race who has spent half my life in Australia and half my life in Hong Kong, identity is never something I have taken for granted. I see this conflict everywhere, in my parents’ nervousness about returning to Australia for retirement, in the way many of my patients still pine for their countries of birth. The recent census tells us that almost half the population are either first or second generation Australians. I hope they see themselves reflected in the book and in doing so, feel a little less alone.

I want to talk about story craft here a little bit—at every writer’s festival I go to, there’s always one audience question about the writing process, or how one becomes a writer.  But there’s less understanding out there about how one becomes a short story writer.  When you sat down to write Australia Day, did you write it in order?  How long did it take you to get all of the material for the book?

Melanie Cheng: Some of the stories in the book are almost ten years old, but I did not have a collection in mind when I originally started writing them. They were written as stand-alone stories, initially for my own amusement, and then for journals and competitions. The themes emerged in an organic rather than a deliberate way, and reflect my natural preoccupations with identity, belonging, family, and chance encounter. Order was something my editor and I spoke about a lot. While a lot of short story readers dip in and out of collections, I wanted to appeal to the traditional novel reader who would likely read the book from start to finish. We went for a light and shade approach in the end, varying the voices and settings rather than keeping similar stories together.

How different is the book that has been published to the manuscript that won the Victorian Premier’s Unpublished Manuscript Award?

What publications do you look to as being the most important ones for emerging short fiction writers?  Who gave you your earliest publication credits, and what did you learn from them?

Melanie Cheng: Peril was my first break. They published a short non-fiction piece I wrote about my Chinese grandmother.  Julianne Schultz and the team at the Griffith Review have also been a wonderful source of support and encouragement. Over the years I’ve learnt to submit widely. Sometimes an article, especially a non-fiction piece, might not be picked up simply because the timing isn’t right—the journal may have just run an article on a similar topic, or the news cycle may have moved on since the article was written.

This one is a question that comes up again and again in writing groups.  You’ve got a range of different sized short stories in this collection—I think the story ‘Muse’—which is one of my favourites, by the way—is probably the longest?  Are there any hard and fast rules about the lengths of short stories in Australian publishing?

Melanie Cheng: Obviously when you write for competitions and journals there are certain restrictions. For some reason a common word limit seems to be 3000 words. I remember Michael Heyward at Text giving me permission to make my stories as long as they needed to be, and how freeing this felt after being restricted for so long. I think word limits are arbitrary and can ruin a good story by forcing the writer to bring a piece to an end before it is ready.

What has the reception of the book been like so far?  What sorts of bookish events and promotional activities are you looking forward to now that the book has come out?

Melanie Cheng: I’ve been just blown away by the way booksellers have got behind it. In fact I feel very grateful and humbled by the whole experience. Readings announced ‘Australia Day’ as its Best Fiction book for the month of July and Librarians’ Choice included it in their top 10 books for July. It was also one of iBooks best books of the month. I still pinch myself regularly. In terms of bookish events, I’m doing the literary luncheon with Antipodes bookshop next week and then it’s Melbourne Writers Festival where I’m doing three events: a library event with Tony Birch, Asia What? - a day of free discussion and workshops exploring Asian narratives, and a Readings Recommends event with Jennifer Down and Ryan O’Neill, all of which I’m extremely excited about.

Is there anything else you would like readers of your book to know?

Melanie Cheng: My great hope would be that people read the stories and find themselves relating to characters who are, at least on the surface, very different to them. One thing I’ve learnt from working in diverse communities is that we are all much more alike than we are different.

You can pick yourself up a copy of Melanie Cheng's amazing book, Australia Day from all good booksellers.  Australia Day is also the next book up for discussion in the Short Story Book Club at the Centre for Stories-- you can book in to join us here (and please do!)