Headline Review, 2017
I own a copy, courtesy the publisher. 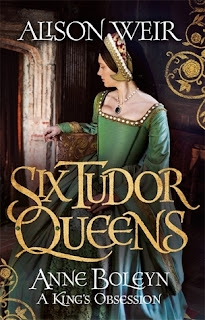 Of all of Henry the Eighth's brides, Anne Boleyn is probably the most infamous.  Mother to Elizabeth the 1st, Anne was Henry's second wife, for whom he broke with the Catholic Church and set aside his Spanish Queen, Katherine of Aragon.  Of course, she was also accused of adultery and witchcraft, and beheaded.

This is the second book in her Six Tudor Queens series, which will see a book on each of Henry's brides published one a year for six years.  Alison Weir is the one of the top-selling historians in the United Kingdom, and a Fellow of the Royal Society of Arts and Sciences, as well as an Honorary Life Patron of the Historic Royal Palaces.  She has published numerous books on the Tudors and the Wars of the Roses, both fictional and factual.  As she explains in her author's note at the end of the book, it is hard for any modern reader to really know what was going on in Anne Boleyn's head during her courtship and marriage to Henry Tudor, as most of her letters have been lost to the years.  Modern interpretations see her portrayed as ambitious, a vixen, wily-- history has not been kind to Anne Boleyn.  We've seen her portrayed by Natalie Dormer (The Tudors), Natalie Portman (The Other Boleyn Girl) and if I'm not mistaken, by Claire Foy (Wolf Hall-- which I've yet to watch, though I've read the novel).  In most portrayals, she is clever and cunning, but not likeable.  She is, in short, a villain.  But Weir's novel, Anne Boleyn: A King's Obsession shows a new interpretation of Anne Boleyn.

It is a long novel, but books of this sort always are.  (I'm looking at you, Hilary Mantel...)  Much of the early parts of the book focus on Anne's early life, first at the court of Margaret of Austria, and then at the French courts of Margaret of Anjou and Queen Claude.  At these courts, where strong women abound and men are unscrupulous and brutelike (there are several accusations of rape, which seems to me a more modern term than perhaps women would have bandied about at the time), Anne learns her own mind, and comes to support some quite radical views.  While she's not a Lutheran in this book as she is in some others, she does support the philosophical underpinnings of church reform, and is also exposed to what could perhaps be seen as an early form of feminism.  Anne's strength of will and character make her a likeable heroine-- for once-- even despite the considerable overlap between this book and the earlier volume, Katherine of Aragon: The True Queen, in which she is despised.

Where the book lagged a little was in the latter parts of the narrative, where she was in favour and out of favour, over and over, and came to be pregnant time and time again to no result.  Unfortunately, this is the trouble with writing about true events-- you cannot bend the narrative to your will unless the history supports it.  As Anne grew more frustrated with Henry's treatment of her, she became less strong in her character, though her final scenes in the Tower of London do give me more respect for this woman and the way in which this fictional version of her met her end.

I loved this book and I can't wait for the next one.  Though I've never been interested in Jane Seymour over much, I am fascinated to see what sort of person she may have been, under the tutelage of the ever-capable Alison Weir.