Hachette Australia, 2017
My copy was borrowed from the library 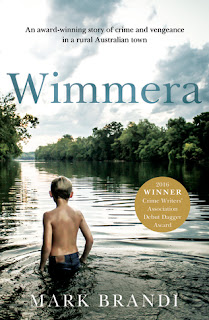 Almost overnight, Wimmera by Mark Brandi became one of the most talked about Australian debuts of 2017.  With comparisons to Jasper Jones being bandied around, I couldn't help but be curious.  Wimmera is the story of Ben and Fab, who grow up in a small town in Victoria.  After the suicide of a local girl, a stranger moves in down the road from Ben, and hires Ben to do odd jobs around the house.  Years later, Fab is still living in the town, collecting trolleys at the local supermarket.  When a grisly discovery is made, it draws Fab back into the past and the events of that year, and his friendship with Ben.

Part literary novel, part courtroom drama, part mystery, part coming of age tale, Wimmera has a little something for everyone.  Brandi cleverly evokes the obsessions and preoccupations of pre-teen boys, and switches perspectives with a deft hand, as the novel is broken into several parts and perspectives.  This is a subtle book, and one which allows the reader to draw their own inferences about how the parts are all connected.  The voice of Ben in the early part of the novel is a particular strength.  Ben is a likeable character; he's tough and loyal, good at sport, but also trying to work out his place in the world.  His moral compass is definitely working-- while Ben is big and strong, he's not a bully, though he does resort to violence when it comes to defending his friend Fab.  Fab is cheeky and a source of fun for the local bullies, who call him a 'wog' and tease him mercilessly.  Not that Fab is a meek victim... he has his revenge in other ways.  The second part of the story is told from the point of view of a much older Fab-- a Fab who is going nowhere in life.  He drinks too much, has a terrible job, is in love with a married woman and is still the victim of merciless bullying.  And this time there is no Ben to back him up.

Did I love this novel?  Yes, I did, but I wanted more out of it.  In each of the sections, we see the character narrating the story clearly, but the other character is a little inscrutable.  Some of the scenes left too much up to the reader to work out, and seemed to end abruptly, such as when we're left to assume that Fab is the one who has unscrewed the front wheel on Pokey's bike, causing an accident.  And while the central intrigue of the story was cleverly built, I felt a little like the resolution was over too soon.  This was a powerful novel of friendship, of revenge, of deep hurts, and I loved every minute of it, but now that I've finished, I find I wanted more.  The author did such a fantastic job creating the world, the characters, the situation-- I was transfixed.  I wanted to stay in the world of Wimmera-- gruesome though it was-- for a lot longer.