This week, I caught up with Jennifer Down, author of Pulse Points and the novel Our Magic Hour, via email to talk about her short story collection ahead of the next session of the Short Story Book Club on September the 19th.  Here's what she had to say: 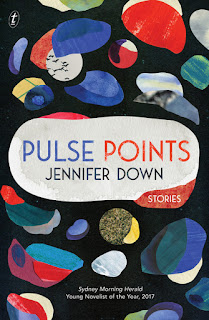 Many people would have first come to your writing when you won the ABR/ Elizabeth Jolley Short Story Prize for your story Aokigahara.  I have a strong memory of reading that story on my lunch break when it was published online, and being unable to keep myself from crying.  What did winning that award mean for you as a writer?

Jennifer Down: Thank you! It was pretty surreal. I’d entered the prize the year before, too, and maybe the year before that. It was certainly validating, because it’s a prize that doesn’t distinguish between emerging and established writers, and it’s open to international entrants, and because some of its past shortlistees and winners are people whose work I greatly admire. But prizes are inherently subjective, too, and some elements of it do come down to luck and timing.

The stories in your collection don’t always take place in Australia.  We have a story set in Japan, one in France, several in different state of America, one in England and so on—to what extent does this reflect your own travels?  Could any of these stories have taken place anywhere else, or was the location you set them in bound up in the story you wanted to tell?

JD: Setting is important to me as a writer—I write it pretty much the same way as I write character, which is really central to my stories—so that specificity is intentional. Often the setting informs the mood of a story, like the vastness of that rural New Mexico space in ‘Vaseline’. But they’re not necessarily set in places I’ve been. Like I spent four months in Japan as an exchange student when I was sixteen years old, but I’ve never visited the jukai, the sea of trees, in ‘Aokigahara’. And I’ve never been to that tiny shit-kicking town in ‘Vaseline’, either, or hiked the Appalachian trail in ‘Eternal Father’. It’s a lot of research, too.

One of the remarkable things about Pulse Points as a collection is the way that you are able to inhabit so many different characters in different circumstances.  One of the most stark examples to me is the character in ‘Dogs’—a young man who, to my mind, was engaging in some despicable acts.  Was it difficult for you to find and perfect these voices?

JD: In many ways, no—I think much of the time, as a fiction author, it’s more difficult to write candidly from your own first-person perspective. You have to be careful to make the voice convincing, particularly if it’s a first-person narrative and particularly if the voice is vastly different from your own, but it’s also about empathy. Or maybe emotional sensitivity is a better way of phrasing it. It’s sort of like being an actor, and having to crawl inside someone else’s brain. It doesn’t mean you are that person, or share their views or values. Plus, anyone who reads broadly has read many, many different voices, and once you acclimatise to them, you learn how they work from a dialogue and syntactical perspective, I think, and that helps you write them.

Since winning the ABR/ Elizabeth Jolley Prize, you published a novel, Our Magic Hour, but obviously ‘Aokigahara’ had already been written.  How long did it take you to get the material that you needed to put this collection together?  Were you writing short stories at the same time as your novel?

JD: I actually wrote ‘Aokigahara’ a few years after I’d finished the first draft of OUR MAGIC HOUR! Most writers start off with short fiction and move onto the longer form, but I sort of did back to front—I cut my teeth writing novellas, and then OUR MAGIC HOUR, which was picked up by Text Publishing in mid-2014, and then I won the Jolley a few months later. I really love short fiction; I think it’s my favourite form to write, and it teaches you so much about precision and discipline. I was plugging away at new short stories while OUR MAGIC HOUR was being edited, and then after it was published, too.

Would you say that there’s an overarching theme to your collection?  What did you want readers to take away from reading your book?

JD: I don’t think there’s a real overarching theme, but I do feel like the stories fit together. In some ways I’m reluctant to suggest what I’d like a reader to take away; I can’t control for how it’s read, and everyone approaches it with the lens of their own experiences, memories and so on. But it is really incredible when people say that a particular story really punched them in the gut, or made them feel some kind of visceral reaction. And I think, generally, we learn a lot about empathy and sensitivity through reading.

Do you have a particular favourite piece from this collection?

JD: I like ‘Coarsegold’, the last story—it was a weird, long story, almost a novella, that took years to write, but I’m glad it made it into the collection. And the title piece, I think, because it was the first thing I’d written in ages after feeling like I didn’t have the confidence or skill anymore. It happened pretty quickly, and I remember being so relieved, like, ‘Oh! I can still do it!’

Which short fiction writers inspire you?

Jennifer Down is a writer and editor whose work has appeared in publications including the Age, Saturday Paper, Australian Book Review and Overland. She is one of Sydney Morning Herald’s Young Novelists of the Year, 2017. Our Magic Hour, her debut novel, was shortlisted for the 2014 Victorian Premier’s Literary Award for an unpublished manuscript. She lives in Melbourne.

The next Short Story Book Club is taking place September the 19th.  If you'd like to join in the fun, all you need to do is register your interest via the Centre for Stories website, and pick up a copy of the book from your favourite local bookstore!
Labels: author interview book club perth centre for stories free book club jennifer down perth short story book club