The Mitford Murders by Jessica Fellowes
Sphere, 2017
I own a copy, courtesy of the publisher 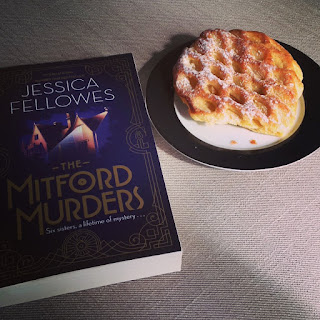 With the cinematic remake of Murder on the Orient Express looming, it seems as if Agatha Christie is back in vogue again-- that is, if she were ever out of it, who am I to say?  It's timely, then, that Jessica Fellowes should be launching her new cosy mystery series now.  Set in England in the early 1920s, The Mitford Murders looks to be the first in a series of books following accidental sleuth Louisa Cannon and sidekick, Nancy Mitford.  This first volume introduces us to Louisa, nineteen years old and living with her mother and her Uncle.  Her mother does laundry for some of their more well-off neighbours, and while Louisa has a loving relationship with her mother, the age gap between them is considerably more than between most mothers and daughters of the time. After the death of Louisa's father, Uncle Stephen comes to live with them.  Uncle Stephen is not a very nice man at all, and he owes money up and down the country, with no means of paying anyone back, except by nefarious means.  When he decides to prostitute out his niece to one of the people he owes money to, Louisa knows that she has to make her escape, and so she takes a job at Asthill Manor, the home of the Mitford family.

Of course, the Mitfords are real people-- and a few of the Mitford sisters are rather well-known today.  A few people have remarked in their reviews that the narrative really did not require the use of the real-life Mitford family at all, and I would be inclined to agree.  While I'm a big believe that there IS a difference between history and historical fiction, and that under circumstances, it's all right to play around with people and events (so long as research is done, and no harm comes of it), this story could have been just as entertaining were it about entirely made up people.  The murder at the centre of the plot is real too, and remains unsolved to this day, though the book offers an explanation which is somewhat complicated and fanciful.  In her author's note, Fellowes admits that she manipulated the date of Nancy's eighteenth birthday to suit the plot, which I don't really see a reason for.  Then again, I think most historical novelists must do this sort of thing when they have no alternative, and good on Jessica Fellowes for being upfront about it.

Where Fellowes excels is in her descriptions of the fashions and customs of 1920s life in the upper classes.  Would we expect anything less from the writer of the Downton Abbey companion books?  Her ballroom scenes sparkle, and her social niceties give a lovely authentic feel to the interactions.  However, I couldn't help but feel that an excess of this sort of description obscured the fact that the plot was rather convoluted, and that the point of view of the piece seemed to jump around, sometimes hopping in and out of three or four different heads in the space of one scene.  Louisa herself wasn't much of a protagonist.  While she had strong motivations, in running from her Uncle, and something to look forward to in her relationship with Railway Policeman, Guy Sullivan, I never got a sense of her as a woman.  She had no likes, dislikes, or strong opinions.  She seemed a little like a sounding board for Nancy Mitford to bounce ideas off of, which begged the question of, if writing about the Mitfords was essential, why Nancy was not made the protagonist in the first place.

As far as a light, cosy mystery goes, this one was entertaining so long as it wasn't held up to particularly close examination.  I read it in two days, and was never so annoyed by it that I felt I couldn't continue.  I think readers of Kerry Greenwood or Agatha Christie would probably quite enjoy this book.  At times, I was reminded of the earlier episodes of Miss Fisher's Murder Mysteries, and curiously, wanted to either go and reread Love in a Cold Climate (of which I remember very little except being nonplussed) or to begin re-watching Downton Abbey again for the third or fourth time.  Perhaps this series will get better with time, but I think it's safe to say that this series is not for me.