The Last Act of Hattie Hoffman
Mindy Mejia
Quercus, 2017
I own a copy courtesy of the publisher 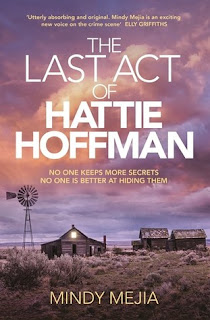 In a small town in America, a young woman named Hattie Hoffman is found dead in an abandoned barn.  The Sheriff on duty is Del Goodman-- a Vietnam veteran, and a friend of the Hoffman family.  Del is a good cop, but this case is personal, and his sanity may depend on whether or not he can get justice for Hattie.

Told in three voices, The Last Act of Hattie Hoffman is both a murder mystery and a coming of age novel.

Hattie is a chameleon.  She changes her personality to fit in with the people around her, becoming whatever they want most.  The perfect daughter.  The devoted best friend.  The star pupil.  (In some other countries, the novel is titled Everything You Want Me to Be.)  She is a seventeen year old girl, bright but a bit of an introvert, except when it comes to acting.  The night of her murder, she has been on stage performing in her school's production of Macbeth, and her portrayal of Lady Macbeth has proved to the adults around her that there are hidden depths to Hattie.

Then there is the voice of Peter Lund, Hattie's English teacher and director of the school play.  Peter has moved from Minneapolis so that his wife, Mary Beth, can take care of her elderly mother Elsa.  Elsa refuses to leave the farm where she and her husband had lived all through their married life, and while the arrangement is only supposed to be temporary, Peter watches as his wife slips easily back into the life she left behind.  Feeling like an outsider, Peter turns to online chatrooms, seeking intellectual conversation about books and art, and finds himself embroiled in a digital affair with the charismatic HollyG (as in Holly Golightly- the heroine of Capote's Breakfast at Tiffany's.)

The final voice is that of Del Goodman.  While Peter and Hattie's sections span the months leading up to Hattie's death, Del's sections happen after, as he negotiates questioning suspects, digging into the files on Hattie's computer, and the long, painful wait for DNA analysis at the busy Minneapolis crime lab where he has sent all the evidence for testing.  Del finds himself torn between his hurt and anguish over the death of the little girl he once knew, and the truths he uncovers about the young woman she had become in the course of the case.  As all of the pieces slowly begin to fall into place, what we are given is a complex portrait of three emotionally isolated people living in a small town.

This is a stunning, complex novel, akin to Anna North's The Life and Death of Sophie Stark.  It relies on a multi-perspective view of the world which plays with the way that different characters are viewed in different contexts to skew ideas of innocent, guilty, good and bad.  All the while, the book is extremely readable, at times even binge-readable.

By the end of the book, it's clear to see that Hattie Hoffman was a likable sociopath just trying to find her way in the world, and despite the view that readers may have of her behaviour by the end of the book, Mindy Mejia has definitely captured the rift in a community that is created when a young woman is murdered.  The setting of this book- both physical and 'emotional/social' is spot on, and adds to the atmosphere.  I could see this book being adapted for a film easily, and, being an actress, Hattie would probably have liked that.

Filled with intertextual links to books line Jane Eyre, this is a thinking person's mystery, a literary crime, and would probably appeal more to readers of literary fiction than someone craving a straight up mystery.  I found it the perfect blend, and loved getting to know the people as I followed along in the solving of the crime.

The only part of the book which fell flat was related to the ending, and if you haven't read the novel, perhaps now is the time to close the browser and read this interview no more.  The resolution of the book relies on a double twist-- and it simply was not needed.  One twist would have been fine.  The second twist brought the resolution back to a far more basic level and it made everything leading up to its discovery seem like a frustrating waste of words and time. The tragedy of the set up that first twist suggested-- a man in jail after committing to the crime of his wife so that she won't have to raise their baby in jail-- fits perfectly with the rest of the book.  Sure, it's depressing, but it fits.  It was that kind of book.  I love that kind of ending.  But as it was, the new ending was too neat.  Everyone got a fresh start but Hattie (and the killer, of course).

I could forgive the ending, because I enjoyed spending my Sunday curled up with this book, and I think you probably would too, if you've read this far.