Book Review: We That Are Left by Lisa Bigelow

We That are Left
Lisa Bigelow
Allen and Unwin, 2017
I own a copy courtesy of the publisher 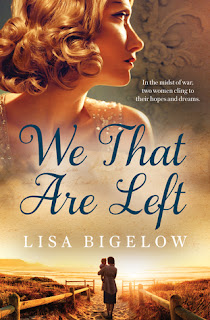 The sinking of the HMAS Sydney was a sobering moment in Australian history.  Mystery and rumour surrounded the loss of the vessel and all 600 + souls on board until the mid-2000s when the wreckage was finally located.  In We That Are Left, the struggles of the loved ones left behind by some of those crew members lost in the tragedy are re-imagined.

We That Are Left is the story of two women.  There is Mae, who is looking forward to her naval engineer husband coming home to spend Christmas with his baby daughter when she hears that his ship, the Sydney is missing.  The other woman, Grace, is a country girl who has come to Melbourne to becoming a reporter, just like her heroine, the movie character Torchy Blane.   She's in the newsroom when the rumour comes down the wire, and watches as the news media are gagged by the Armed Forces, desperate to keep the loss a secret for as long as possible not to damage morale.  Bound to report on the story, Grace must witness first hand the suffering of those left behind. When her fiance is injured in Singapore covering a story, and then captured by the Japanese and held in Changi, she too must endure the pain of waiting for a loved one to return, not knowing if he'll be the same man who left.

Lisa Bigelow's debut novel brings a human element to a well-known event of Australian World War Two history.  While many of the facts of the tragedy are known, to read about wives and mothers and children who are missing their loved ones and hoping against hope that the ship will miraculously turn up is to really appreciate the impact of the event.  One benefit of a historical novel is the certainty that comes with time.  Writing this piece, Bigelow and her readers know much more about the event than her characters ever will, and it is with great empathy that she evokes this pain and heartache and blind faith in her character, Mae.  While Grace and Mae have several crossovers, they never actually meet within the book, and yet their stories are completely intertwined, bringing home the interconnectedness that always becomes apparent after big events.

While writing about tragedy, Bigelow's writing is never heavy-handed.  This novel is also rich in hope-- from the support that Mae receives from her family, to the steps she takes moving on to the next phase of her life, or for Grace, the way that her career begins to progress as a woman looking for work in a man's profession when men are scarce.  Far from being a romance, We That Are Left is a novel about two characters who are forced to find the strength to endure the lasting impact that war has on their home lives, and while each woman has her own flaws, there is something very relateable about their journeys.

This novel is a quick, absorbing read, which will appeal to fans of Deborah Burrows.