The Cottingley Secret
Hazel Gaynor
Harper Collins, 2017 (I own a copy courtesy of the publisher) 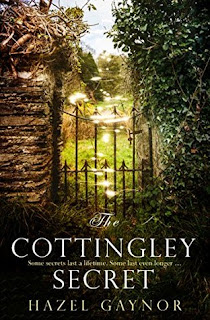 Though I watched the movie Fairy Tale: A True Story (1997) many times as a child, it wasn't until the news of this book coming out did I think to check if the story of Frances and Elsie and the Cottingley fairies really was based on a true story.  In 1917, Frances Griffiths and her cousin Elsie Wright stunned the world by photographing themselves in the company of fairies down at the 'beck' (an old word for stream) at the back of Elsie's family home in Cottingley, Yorkshire.  These photographs soon came to the attention of the local Theosophical Society, and were certified as genuine by a Mr Snelling-- an expert in photography.  They also came to the attention of Sir Arthur Conan Doyle, author of the Sherlock Holmes books, who went on to publish these photographs alongside two articles which he wrote for The Strand, as well as a book called The Coming of the Fairies which was released in 1922.  Many may find it strange to think that the author who created one of the greatest deductive and logical minds in fiction could believe in the supernatural, but it must be taken into account that these photographs appeared at a time of grief, near the end of the First World War, where every town had lost loved ones.  Conan Doyle was no exception, his own son having died.  The film Fairy Tale touches on this a little by introducing the character of Harry Houdini, who makes it his mission to debunk the phony psychics who claim to be able to channel the voices of loved ones, taking advantage of the grief being felt world-over.  When Conan Doyle (played by Peter O'Toole) asks Houdini (Harvey Keitel) if he truly believes Conan Doyle could have been tricked into thinking a phony psychic was speaking to him in his own child's voice, Houdini replies "You wouldn't be the first."

In the 1980s, Frances and Elsie admitted to staging the first four photographs, creating the fairies out of illustrations from Princess Mary's Gift Book which Elsie had drawn on sandwich paper and propped up using hat pins.  But the girls have always maintained that the final photograph, called 'The Fairy Bower' in Conan Doyle's accounts, was genuine.  In this image, faint shapes that resemble female figures can be seen gathered around the outside of what looks like a bird's nest in the grass.

If you would like to read more about the Cottingley Fairies, or see the images taken by Elsie and Frances, you can do so here.

One hundred years on, Irish author Hazel Gaynor reimagines the story of Elsie and Frances for her latest historical novel.  The Cottingley Secret is a beautiful, multi-layered story which follows Olivia Kavanagh in the present day and Frances Griffiths back in 1917.  When Olivia's grandfather dies, he leaves her his second hand bookshop, Something Old, as well as a manuscript and a mystery.  The manuscript turns out to be Frances' account of the Cottingley incident, during which she and her cousin Elsie staged fairy photographs in order to convince their families that they really did see fairies down at the beck.  The fairies themselves being too difficult to photograph, Elsie and Frances resorted to making their own fairies to ensure they would get the proof they needed. Frances begins to have strange dreams of the fairies, in which a little red headed girl hands her flowers and repeats 'For my Mammy'.  Neither Frances nor Elsie could have predicted the flurry of attention their photographs would bring, nor the way that their story would captivate the hearts of a nation.  Meanwhile, as Olivia reads Frances' words to her grandmother, now in a nursing home with severe dementia, she begins to find out the secrets of her own family's past.  Olivia too begins to dream of the red headed child and the flowers.  Who is she?  What connection does she have to both Frances and Olivia?  And is it really the fairies who are making magical things happen in the window of Something Old?

The Cottingley Secret is a perfect escapist read.  At times, the prose can be a little clunky, and I found the first few chapters a bit cliched, but once I was into the flow of the narrative, it was the story that carried me along.  It has a bit of everything-- history, magic, romance and a family saga, as well as some great literary references thrown in.  It's also a love story to bookshops, and I have to love that!  Some of the plot points were a tad convenient, and I did get annoyed with the ending to Frances' manuscript having notes tacked on from both Olivia's mother and grandmother, just to ensure you felt like weeping a bit (I didn't though-- not quite).  I think many of the things about this book that I found not quite satisfying are traits of the genre, and within that, were done quite well.  But perhaps it's time to move on from a few of them, hey?  We don't always need to find the letter that explains everything.  History is never truly neat and tidy like that.

While it's no Kate Morton novel (and speaking of which, hopefully we are due for another one of those soon, hint hint), The Cottingley Secret hit the spot, and I would be intrigued to read more from this author, especially seeing as she's also written a novel about the Titanic.