Hodder & Stoughton Publishing, 2017 (I own a copy, courtesy of the publisher)

When Lane Roanoke receives a telephone call from her grandfather, telling her that her cousin Allegra has gone missing, she is forced to confront the things she learned about being a Roanoke Girl eleven years earlier when she ran away from the family home. 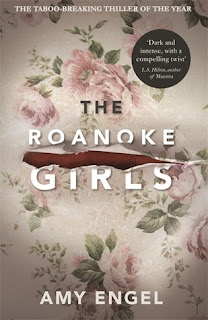 Roanoke girls are beautiful, rich and mysterious, but they also have a habit of running away or killing themselves.  The summer that Lane turned 15, when she first came to the Roanoke properly outside Osage Flats, Kansas, she was leaving an unhappy home.  Her mother, Eleanor (also a Roanoke girl), had been plagued by melancholy Lane's entire life.  After her suicide, Lane learns that her grandparents, whom she has never met, want to take her in.  Not just will take her in, want her.  Lane discovers what a happy, loving home is for the first time in her life, and she meets her cousin Allegra who has been a Roanoke girl since she was born.  But while on the surface, the Roanoke family seem to be perfect, Allegra's mood swings and strange stomach illnesses make Lane question what might really be going on.  And when she finds out, she runs away, not to return until Allegra's disappearance.

Some of the covers of this book call it the taboo-breaking thriller of the year. Certainly the ideas in the book are a little confronting, and you'd need to have a strong stomach to deal with the rising creep factor as you read.  But I get the impression that the author has tried to hold back as much as possible when writing about Roanoke's dark secret, because she's given herself the difficult task of having to make the readers understand why anyone went along with it.  And if you're planning on reading this book and don't want to get any spoilers, I recommend that you look away now.  Because Yates Roanoke, the family patriarch, has been carrying on romantic and sexual relationships with all of the Roanoke girls-- and they all believe that they love him.  Some, knowing it's wrong (like Lane's mother Eleanor) escape the house, but can never escape the feelings.  Others end it, like Yates' younger sister Sophia, who could not cope when his attentions began to turn to his daughter-niece, Penelope.  Frankly, it's quite unpalatable, so I am glad Amy Engel chose not to bash us over the head with this dark secret.

Our story is told by Lane, switching between the present day, when she returns to help look for Allegra, and the past, when she first arrived at Roanoke.  Interspersed throughout the book are short pieces from the points of view of other Roanoke girls of the past, telling their stories, telling why they did it. Some are gleeful, and excited about the way things are unfolding. Others are filled with jealousy, or are angry, or sad.  But ultimately, these short segments are just glimpses, and don't give us enough of the picture.

This was a fast-paced read, and Lane's voice was one I enjoyed following. She's a damaged survivor, and her relationship with local boy, Cooper, is one of the most enjoyable parts of the book.  Contrary to the way the set up leads you to believe things will go down, it is not Cooper who saves Lane at the last minute, but Lane who saves herself, and I respect that.  Allegra is a different kettle of fish.  She's manipulative and deceitful and very moody-- harking back to the victim of the eponymous book Lolita if you ask me, right down to the provocative, age inappropriate dress and behaviour.  She treats the people around her extremely poorly, but there's something fragile and vulnerable about her that makes her endearing.  Lane tries to get her out of there, but she's in, she's stuck-- she likes it there-- and so Lane blames herself for leaving Allegra behind.

The writing in this book is good-- not too dramatic, not to sparing.  Engel vividly conjures up the small American town on the page, and fills it with characters who seem to walk and talk on their own.  I think for me, because of the nature of the secret, the plot was never going to be wholly satisfying.