I may be doing a few of these spotlights this year... it seems a lot of people I know and love are having their books published.  Today, I am shining my spotlight on Dustfall, a beautiful literary novel by Michelle Johnston, who I will also be interviewing next week at the Writers Festival here in Perth. 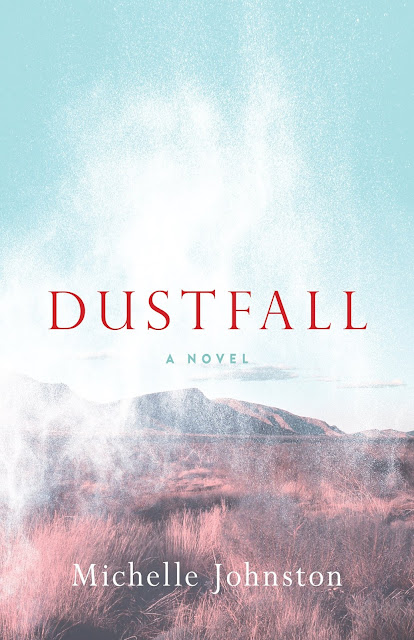 Dustfall is the story of two doctors, Lou and Raymond, one in the 'present' day (although I think her story actually takes place in the late 90s) and one in the 60s, at the very tail end of the life of the town of Wittenoom.  We know now that the asbestos mining operation in Wittenoom had an incredibly high, devastating cost for the workers and their families, many of whom would suffer from mesothelioma for the rest of their lives, however long those lives would be. The town has now been degazetted, and does not appear on any maps.  But in Dustfall, Dr Lou Fitzgerald, fleeing a medical error that haunts her, finds herself in Wittenoom on route to a rural medical posting, and decides to stay a while.  Whilst there, she discovers that some people actually do still live in the town, and through talking to a man named Dave, she discovers the terrible past of the ghost town she has stumbled upon.  Meanwhile, Dr Raymond Filigree, newly arrived from England to be the town's medical superintendent, finds that he has his work cut out for him as the Wittenoom of the 1960s is ruled over by a mining corporation who think that throwing money at problems will make them go away.

There is much at work in the story of Dustfall.  It is not only a novel about Wittenoom and what happened there, but a story about second chances, and a story about stories. In writing the story of what may have happened during Wittenoom's last days, Lou is given the chance to take back some control of a narrative, a therapy that she badly needs given that as a doctor, sometimes there is only so much that one can do. In telling the story of Raymond and the town, she gives a voice to the victims of the mining company, and in some small way, gives them justice.  But she also gives herself a gift. It is through this writing about another doctor and another time that she is able to order her thoughts and see a bigger picture, allowing herself to face the things in her own life that trouble her. And though her past errors hang over her for much of the book, the reader begins to trust through the integrity of this woman that they are following from page to page, that perhaps she is being harder on herself than she needs to be.

Read Dustfall.  Reread it.  Read some of the passages aloud because there is music in them.  You will be moved.

You can catch Michelle Johnston in conversation with me next Sunday the 25th of February at the Perth Writers Festival.  Tickets can be purchased here.