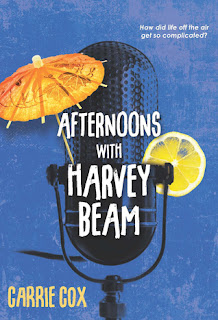 There would be few vehicles less perfect to write a book about the dysfunction of modern life than making your protagonist a talkback radio host.

Harvey Beam, once the star of a Sydney commercial radio station, begins his journey back to his old home town of Shorton in disgrace.  His father, Lionel, is dying in hospital and so Harvey steps away from an employer who wants to replace him and returns to the place where it all began.  Not much seems to have changed, except for Harvey himself.  His two sisters, Naomi and Penny are still engaged in a never-ending argument, his brother Bryan is still sitting on his high horse and relishing being the favourite brother, and it's still impossible to get a decent cup of coffee anywhere in the town.  Yet compared to Sydney, Shorton is a breath of fresh air for Harvey.  Though at first he resents the idea of having to go back to a small town in the middle of nowhere, where he's not a big shot anymore, it takes getting away from Sydney and big city life for him to realise just how fed up with it he is.  Shorton still has a few surprised in store for Harvey, not least in the form of Naomi's rarely before sighted husband Matt, whom Harvey views as one of the actual few interesting people he's ever met.  And then there's Grace.  What began as a conversation between neighbours on the plane flight in seems as though it may blossom into something more.

Told through alternating snippets of the present day in Shorton, and in notable moments of Harvey's radio career as a talkback host, the novel uses the medium of radio programs to introduce topics like big city versus small town mentalities, 'no go' zones when it comes to dating a friend's ex, social customs regarding funerals, the value of arts degrees and so on.  Harvey seems to have a clear ethos when it comes to what makes good radio, and how best to get people talking, but the longer he stays in Sydney, the more he comes off as a privileged shock jock and towards the end of his career at the commercial station, he begins to make several newsworthy blunders.  It is only when he is back on Shorton radio once more that he realises criticism is not conversation, and his attitude towards life does not endear him to others.  This is a technique that works really nicely for the novel, barring in one section towards the end of the book, where the talkback topic is September 11-- the connection to the progress of the plot was lost on me there, and it almost seemed like a forced grab at depth which the novel really didn't need.  I got more from the talkback segment on Wayne Carey's infidelity with a team-mate's wife, which had a direct link to a decision Harvey was trying to make.

As the novel wraps up, there seems to be a race for the finish line, and though a few questions remained unanswered, for the most part, it seemed like characters ended up where they needed to.  A few things which were established in the final chapter through summary might have warranted their own scenes.

Afternoons with Harvey Beam is a frank, funny, and very Australian family drama.  As the Beam family gather around the bedside of Lionel to say their long goodbyes, the reader is given access to a complicated family history, involving divorce, abuse, favouritism and the fierce bonds that can form-- or not form-- between siblings.  As Harvey reflects on the relationship he had with his father and the trajectory his life has taken since he left his home town, he is forced to compare his own performance as a father and as a man.  Though not always reliable when it comes to doing the right thing, Harvey is a sympathetic character, and one whose actions are easy to understand when you look at what he has been up against.  By the end of the book, it's clear to see that change and redemption are possible for Harvey Beam, though not every relationship in his life has been sorted out come the close of his father's funeral.  Akin to Jonathan Tropper's This is Where I Leave You but with more of the community feeling evoked by a setting of a stinking hot town with one pub, Afternoons with Harvey Beam will appeal to readers young and old, and is a perfect choice for book clubs.
Labels: afternoons with harvey beam book review carrie cox fremantle press wa writers WA writing