This weekend, short story writers from around Australia descended on Aberdeen Street in Northbridge for the third annual Australian Short Story Festival. The brain child of Margaret River Press and Midnight Sun Publishing, the festival has previously presented the likes of Cate Kennedy, Tony Birch, Ryan O'Neill, Melanie Cheng and many more. This year's festival was opened by David Malouf, who spoke at Gallery Central on Friday night, musing on the nature of creativity, and the interconnectedness of his body of work. He had many pearls of wisdom to share with the audience, such as the idea that the ending to a short story is inevitable, because the groundwork for it has already been laid in the existing words; the idea that you have set up for an ending that you have not even decided on yet is comforting to me, as endings have always been the part of writing that I have struggled with the most! David's generosity in sharing his thoughts with the audience continued into question time, where he invited responses to his work. His ability to turn any question into an opportunity to think about writing and ideas and craft made this section of the evening perhaps even more enjoyable than his opening address, no mean feat, as the open section of any literary event is often a mixed bag. I was introduced to David by my dear writer friend, Louise Allan, after the event-- (though I did not tell him that I had studied his books for upper high school and that they had been widely despised by everyone in my class!  I have since reread Fly Away Peter as an adult and loved it, and wonder if perhaps its depths are lost on sixteen year olds.)

Day two began bright and early, as I headed to the Alex Hotel for my first shift as a festival volunteer. The Alex is a beautiful venue and it was a great privilege to be able to use their stunning terrace as a location for two sessions this year. The first, called Three Writers Walk into a Bar was a conversation between talented local writer and interviewer, Annabel Smith, and visiting authors, Yvonne Fein, Anthony Macris and Laura Elvery. With a stunning vista surrounding them, these authors conducted an intimate chat, complete with readings. 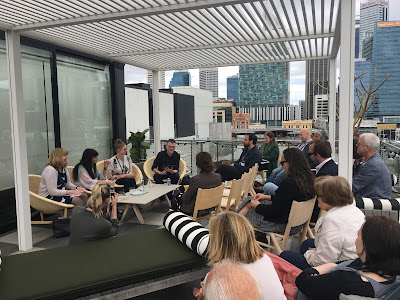 From there, it was back to base, the stunning and newly renovated Centre for Stories at 100 Aberdeen Street in Northbridge. Transformed into festival central, the centre played host to two session rooms as well as the courtyard sessions, festival bookshop and green room.  It was there that I was able to make my way into a session with visiting author and poet, Maria Takolander in a session called Maria Takolander is Not Afraid. Maria spoke about the hilarity of this title choice, saying that one of the reasons that she writes is actually because she is afraid of everything, and that writing about something is a way of taking back control. I loved this session and took copious notes-- I even asked a question at the end, something I never do! I can't wait to get stuck into reading Maria's book The Double.

On day three, it was back to the Alex Hotel to check tickets for the session Are You Sitting Comfortably? This session featured two writers, Sandi Parsons and Hossein Bouazar, who told their stories of bravery and survival, accompanied by balladeer Greg McNeill on guitar. I was not prepared for how powerful and moving this session would be, particularly first thing in the morning.

Volunteering done with, it was back to the Centre for Stories to put on my Festival Guest pass and take part in a panel. Chaired by Amy Lin, the panel was called Why Do You Write? and featured myself, Brooke Dunnell and Hannah van Didden. We spoke about where our ideas came from, whether we were plotters or plungers, how we edited our work etc, and there was a really lovely collegiate vibe in the room. I had thought I would be nervous, but instead, it was just fun and made me feel like going home to write. Alas, there would be time for that later, but immediately afterward, it was out into the briefly sunny courtyard to read at the Westerly Readings session, where poets and writers were showcasing their pieces from Westerly 63.1 and 63.2, which has yet to be released. We made it through half of the readers before it started to pour!

I wish that I had been able to go to a few more of the sessions and I was particularly disappointed not to get the chance to hear Jennifer Down speak about her collection Pulse Points, which just recently won the Readings Prize. Until the next time the festival comes to Perth, or perhaps if I make it over to Melbourne for next year or Adelaide the year after that, I will just have to make do with reading as many short stories and short story collections as I possibly can!