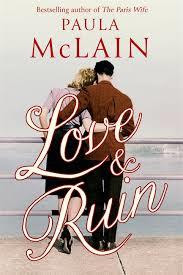 Paula McLain's first big novel was The Paris Wife and when I first started in bookselling, it was the novel everyone was talking about. Following the years that Hemingway et al spent in Paris from the point of view of his first wife, Hadley Richardson, it shed some light onto the larger than life literary figure and gave some agency to a woman who was otherwise a footnote on his Wikipedia page. I don't remember many details from the book, other than that I loved it.

Both of McLain's recent novels, The Paris Wife and Circling the Sun have been criticised for their fawning, simpering heroines, but in Love and Ruin, McLain has Hemingway's third wife, Martha Gellhorn take the spotlight. Gellhorn was a respected writer and war correspondent in her own right, and this novel gently navigates the frustrations that she must have felt in trying to balance her love for a great man with a fragile ego, and her own attempts to do authentic work and be taken seriously as more than just Mrs Hemingway. Though this novel is historical, it is a theme that feels very 2018, particularly scenes such as when Martha receives a 'notice' (presumably a review for one of her books) that talks about her physical features more than it does about her work, and another scene in which a reviewer laments that Gellhorn's writing is becoming more and more Hemingway-esque.

It is no small feat to be able to write a love story in which the love interest behaves badly. Readers expect to want to cheer for the couple to make it, but as Martha's career takes off, and Hemingway's ego takes over, she finds herself wanting to travel into war zones again, to have a break from domesticity and ego-soothing, and to do something about the terrible injustices in the world, which Martha Gellhorn in this novel seemed to feel deeply. McLain is also gentle in her portrayal of Gellhorn's relationship with Hemingway's three sons, Bumby (son of Hadley), Gigi and Patrick (sons of Pauline Pfeifer, or Fife as she is called by Hemingway throughout the book). It is interesting to me that Pauline Pfiefer only appears in the novel as a minor character-- perhaps I am being led by my attachment to Alison Weir's novels about the 6 wives of Henry the Eighth, but it seems strange that she should not have her own book the way that Hadley and Martha have had.

As for the style of the novel, McLain's writing at times does have a hint of the Hemingway to it, with its strong, declarative sentences, but there is something more feminine, and more readable about the book.  I could have done without the many incidences where Hemingway and Gellhorn kissed, and she exclaimed that she 'could not breathe'. It was the only overly sentimental thing about what was otherwise a record of their romance, courtship, marriage and its breakdown.

This is a timely novel in its female-led rewriting of a celebrated literary man, but I fear that it will pass under the radar-- a shame, because it is a book that surpasses The Paris Wife in its writing and its subject matter. While I will never forget the way that The Paris Wife swept me up, because of Love and Ruin, I will now never forget Martha Gellhorn, and that is a far greater feat for this novel.
Labels: book review ernest hemingway hachette hemingway historical fiction martha gellhorn paula mclain