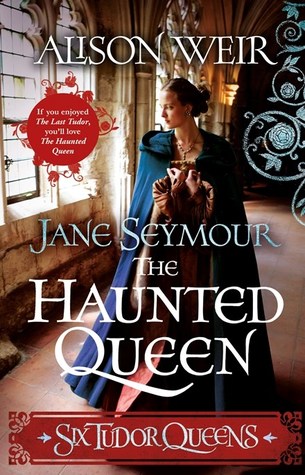 Jane Seymour: The Haunted Queen
Alison Weir
Headline Book, 2018 (I own a copy courtesy of the publisher.)

Portrayals of Jane Seymour don't differ much in popular culture-- she is usually golden and demure, and King Henry the Eighth seemed to have genuine affection for her, which is no doubt aided by the fact that she gave him his sole male heir and then promptly died before she could disappoint him like his previous wives had. Her marriage to Henry, and her time as his mistress preceding it, have always seemed short compared to the years of his marriages to both Katharine of Aragon and Anne Boleyn, and the King's Great Matter which came between them. In this novel, the third in Weir's Six Tudor Queens series, Henry's third wife becomes the subject-- and though her time as his queen is often not given equal attention in other portrayals, here she is also given the same treatment as her predecessors, in that the book is about 500 pages long.

The book begins with Jane at her family home Wulfhall, where she thinks that perhaps it may be her calling to become a nun. Weir notes in her author's note at the end of the book that very little is actually known about Jane Seymour, though her religious faith was often noted upon, and it is not so much a stretch of imagination to believe that this might have been an idea she toyed with, though we cannot know for sure. Her family is rocked by scandal as it is outed that her father has been having an affair with her older brother Edward's wife Catherine. While Catherine is disinherited by her family and put in a nunnery by her husband, Jane's father's part in the scandal is hushed for the good of the family, but Jane grows up wary of adultery as she has seen the affect that it has had on her mother.

When she is brought to court to work as one of Queen Katherine's ladies, she finds in the Queen a lot to admire, and becomes a staunch supporter of her and her daughter the Princess Mary, even as they begin to fall out of favour. Here the novel overlaps with the two previous books, as Jane is one of the people who notices that Anne Boleyn has started to absent herself from her duties and to be unkind to her mistress, all the while spending time with the King. This portrayal of Anne Boleyn is a much more familiar one than the portrait painted in the previous book, Anne Boleyn, A King's Obsession, and there is some suggestion that Jane played a small part in Anne's down fall, although in the novel, when she is given an opportunity to corroborate the evidence presented by Cromwell that Anne is unfaithful to the King, she stays silent. The haunting of which the title speaks seems to refer to the guilt that Jane feels knowing that Anne and her co-accused were killed to clear the way for her marriage. Weir suggests that Jane had no choice in the matter, with the political machinations of her family at work at first, and then the blossoming of a kind of love between herself and the king, leading to the possibility that Jane may have been pregnant when they were wed-- and the fact of this pregnancy making up the King's mind about Anne's fate.

Again, like in the previous novel, there was a bit towards the latter half of the book where the plot did drag, as Jane was pregnant again and again and lost the children. However, the pinning together of all sorts of historical tidbits to create this sort of conjecture is fascinating, and while the end result in this novel is not a new perspective on Jane Seymour, it does raise her up a little in terms of her historical impact.

I gave this book four stars and eagerly await the next installment, on Anne of Kleves, which is due out in May.