This review originally appeared on the AU review, March 27th 2019. 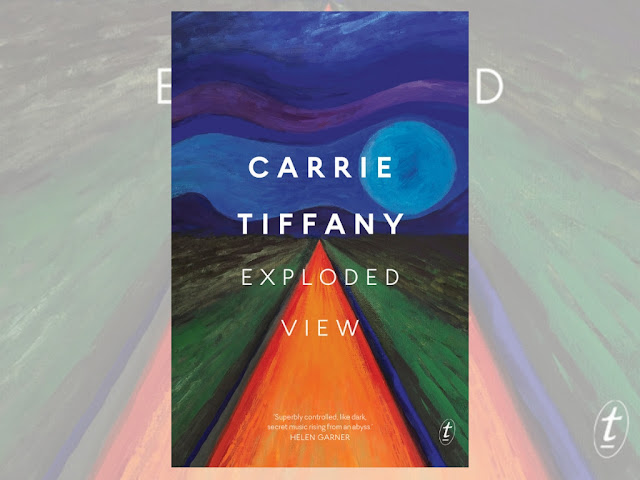 The unnamed protagonist of Carrie Tiffany’s new novel, Exploded View, lets us into her life by increments. Immediately, as readers, we are welcomed into her interior world– a place where the only things that make sense are cars, and engines. It is the late 1970’s, and the girl and her brother watch things like Hogan’s Heroes on the TV, careful to place a tub of ice cream on the top of the television with enough time for it to cool before their mother or the ‘father man’ can discover that they’ve been using it. Money is tight.
Father man– not, in fact, the girl’s real father, nor the romantic hero from the pages of the novels her mother is always reading– makes his money repairing cars. The girl helps, and learns, reading from the Holden manual and studying the exploded views of the engines, in which even the spaces between things have reason and function. The girl does not speak. At night, she drives the cars that Father man repairs, and sometimes, she hurts them.
During a road trip across Australia, this protagonist’s unique viewpoint will turn the reader’s way of thinking upside down. Her clarity of vision, and the matter of fact philosophy that comes naturally to her, make this short book a poetic experience, and while at first glance, it seems like Exploded View does not have much going on in terms of plot, like the diagrams in the manuals, it is the spaces between the text that help make the whole of the book make sense.
Despite this book being set largely in a masculine space– the world of cars, and the father being the dominant figure in the house (he locks the doors at night, and the girl knows that if there were to be a fire, they would all perish in the flames rather than wake him up to let them out), the text contains a lot of subtle and not so subtle references to the female body and the autonomy of it. From the images of small hands being made to fit inside the parts of a car, to the silent handing over of money from mother to daughter to allow her to purchase sanitary napkins at a truck stop, references to the ownership and understanding of female bodies, and the maintenance and protection required to keep them safe and healthy run throughout this text. The true mastery is the way that this ongoing metaphor, the female body as a car in a mechanic’s garage, works to turn the idea of cars and engines as a masculine space on its head.
This is a short, intensely literary novel, more focussed on ideas and characterisation than plot, or even emotional connection. The character, unnamed, undescribed, and unspeaking, is always kept at a distance from the reader, though we know the inner workings of her mind (right down to her sexual fantasy) in great detail. Carrie Tiffany was the inaugural winner of the Stella Prize for her novel Mateship with Birds, and I would be unsurprised to see this book on prize lists in the coming months.
If you’re looking for an entertaining read, something to read quickly and get lost in, perhaps give this one a miss, but if you’re prepared to participate in the slow contemplation of ideas in this unique coming of age novel, then it comes highly recommended, with even a quote from Helen Garner on the cover which reads “Superbly controlled, like dark, secret music rising from an abyss.” If you’re a fan of Australian Literature, this one is not to be missed.
Labels: australian fiction book review carrie tiffany exploded view text publishing the AU review