This review originally appeared on the AU review 11 February 2019. 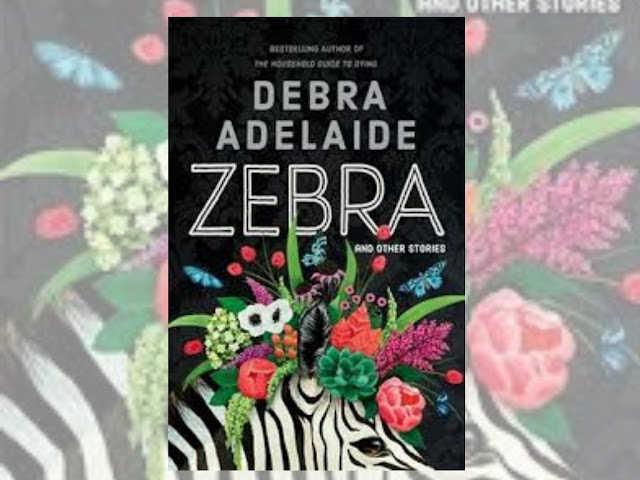 Eccentric, heartbreaking and hilarious- this is how Debra Adelaide‘s latest book of short stories is described on the cover by her Picador stable-mate, Jennifer Mills. The book is Zebra and Other Stories, a collection comprised of fourteen stories, divided into three sections: First, Second and Third. These sections refer to the point of view taken in the stories. Adelaide covers a lot of ground in just over three hundred pages.
Her opening story, “Dismembering” is told from the point of view of a woman who suddenly remembers helping her ex-husband to, at some point during their marriage, bury a body in their backyard. She remembers helping him to cut off the body’s arms, legs and head in order to fit it better into the shallow grave they have dug, but oddly, not whether it was wearing long pants or shorts, or who it was, or why they have killed and buried him. Is this a true memory, or a symptom of some other panic? As the woman begins to purge her house of everything that is connected to her ex– right down to the dining room table, the chaos outside of her house, littered with things for her ex to take away, begins to reflect the chaos inside her mind. This story is a powerful note with which to open the collection, rooted in relatable, specific description of suburban life.
In fact, throughout the collection, it is the stories of suburbia that tend to shine– “Migraine for Beginners”, a second person account of the medical back and forth one woman suffers in her quest to be free of the migraines that make her life unbearable, “No Hot Drinks in the Ward”, a starkly honest account of a mother coming to terms with the cancer treatment of her child, and “The Recovery Position”, in which the protagonist must reflect on the way their flaws has torn apart the family that they took for granted.
But, the book is not all suburban interiors. Zebra is a collection which tackles bigger issues as well, with stories such as “The Master Shavers’ Association of Paradise” and “Welcome to Country” attempting to comment on the issues that run parallel to the lives of these other characters but often go unremarked on. “The Master Shavers’ Association of Paradise”, for example, is a heartbreaking account of life in detention. told again in second person, Adelaide puts the reader in the shoes of a man who was an apprentice Barber back home and who has attempted to hold on to some fragments of his dignity, and help those around him, by helping the men in the camp with him shave their faces. The telling of this story is cleverly done, as Adelaide slowly introduces clues that this detention camp is not in some far flung country, but off-shore of Australia, and when the reader realises that they are not reading some historical account, or some dystopian future, the impact is powerful. It is perhaps a shame that this particular piece had been buried so far into the middle of the book.
While not all of the stories in the book strike exactly the chords that they seem to be reaching for, many are almost there– “Festive Food for the Whole Family” is highly relatable and enjoyable, but perhaps the lead is buried by the humourous descriptions of the woman at the heart of the piece trying to make sure she caters for all of the various picky eaters, vegans, gluten free, fruitarian, sugar free, etc… guests at her Christmas dinner. Likewise, the story “Carry Your Heart”, in which a lonely man and woman find that spark that could be the beginning of love in a bookshop and bond over poetry and martinis, feels unfinished and almost unbelievable in its fairy tale-like randomness.
The title story, “Zebra” is more of a novella than a short story, and I have yet to make up my mind yet whether it was wonderful or a little too weird. In it, an unorthodox female Prime Minister is sent a zebra by the owner of a zoo that is closing down on the other side of the world. Meanwhile, she must contend with an outspoken misogynistic neighbour (though his hatred of women is not actually dealt with even after it is described) and the burgeoning romance that may or may not be feasible between herself and her assistant. The zebra itself is extremely interesting, but doesn’t play all that much of a role in the action of the story.
Zebra and Other Stories is a varied collection of stories that showcases the skill of its author across a range of short story approaches and styles. While not every piece resonated with this reviewer, I predict that it will delight all those short story readers across this country, and I do recommend that you give it a read, if only for those stories that really sing.
Labels: australian fiction book review debra adelaide pan macmillan picador the AU review zebra and other stories