This review originally appeared on the AU review on 15 January 2019. 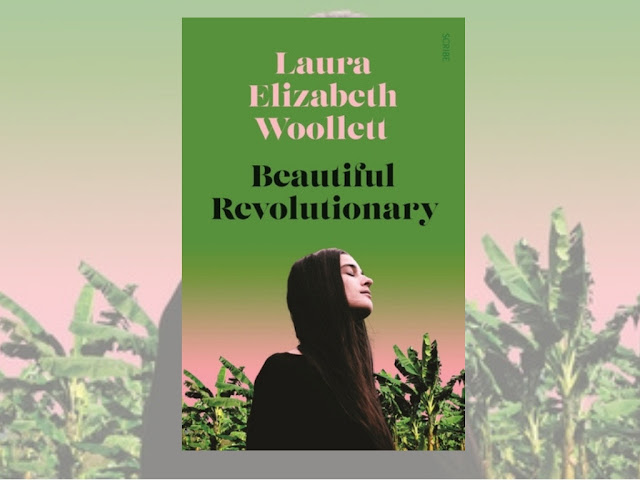 In the summer of 1968, Evelyn Lynden and her husband Lenny move to Evergreen Valley, California so that Lenny can work as an orderly in an asylum- part of the agreement he has made as a conscientious objector, so that he does not have to go over and fight in the Vietnam War. Their arrival in town is eventful, and they are pulled over by Officer Gene Luce. But Luce fails to notice the ‘Mary Jane’ plant in the back seat, and the couple continue on their way. It is Evelyn’s cool head and her strong will that get them through, and continues to get her through as their lives change in this new town, even if perhaps those changes are not for the better.
The book is Beautiful Revolutionary, the first novel from Laura Elizabeth Woollett, whose debut collection of short stories The Love of a Bad Man was an award winning take on the women who were involved with some of history’s less savoury characters. Jonestown featured in this collection too, but in Beautiful Revolutionary, Woollett focusses not so much on the commanding (and slightly unhinged) figure of Jim Jones, but on the people around him. She seems to be asking why so many seemingly normal people could have been taken along by a person like Jones, and while the answer of why is something we may never actually know, she certainly renders the strange fascination well on the page.
Evelyn Lynden is one of the main characters, although the book is not always told strictly from her vantage point, but again and again, the story returns to her. She is, of course, based on Carolyn Layton who was Jones’ lover and the mother of one of his sons. The daughter of a preacher, and a student of political science, Evelyn should be too smart to be taken in by a con man like Jones, but she is drawn to him in a powerful way, and her marriage to Lenny Lynden falls by the wayside early on.
Other characters whose point of view we see are Rosaline Jones (Marceline), Jim Jones’ long suffering wife and an ex-nurse, who plays a central role in orchestrating the ‘healings’ with which Jones demonstrates his power; Gene Luce; Lenny Lynden; Bobbi Luce and Wayne Bud. If one were interested, it would perhaps be possible to unmask all of these pseudonyms. But the book is a work of fiction, and to do so might be to break the spell. Jim Jones is the only figure in the book who has not been disguised, and Woollett wrote in an article for the Alternate Consideration of Jonestown and People’s Temple website that ‘it feels absurd and disingenuous to call him anything else.’
By hearing from so many different voices surrounding the temple, we get a complex portrait of a community filled with people who needed something that ‘normal’ society was not giving them; people who found a saviour in Jim Jones, for whatever reason, and were willing to follow him to Jonestown, Guyana. But the cacophony of voices, while being in some ways an asset, also makes the book a little hard to get into, giving you no time to identify with characters before it is moving on. It is not a book about  Jim Jones, and yet at times, he is the only constant, even if he’s only in the scene at a distance. The title comes from an oft-repeated nickname that Jones gives to Evelyn, as he believes that he was Lenin in a past life, and that she was his lover then too. The link between Jonestown and Communism/ Socialism is a key part of this book, and was an interesting element for me, as it provided a little insight into the ideology of the people involved.
For those who persevere with the book, readers are rewarded with a rich portrait of a highly mythologised historical incident. The passion that the author has had for her research shines through, and it is the scenes in Evergreen Valley which provide the most interest, as less is well known about the cult’s activities before their mass suicide in 1978. The strength of the author’s talent is in full force here- her sentences hum with energy, and though the build is slow, her characters feel real by the end of the book. I would be unsurprised to see this appear on prize shortlists in the year to come.
For those who are Jonestown experts, perhaps there will be less appeal, as the unfolding drama will be nothing new to you, but for readers who appreciate a well-written, well-researched novel that approaches things from different angles, this book is for you, and you should add it to your summer reading stacks immediately.
Labels: australian fiction beautiful revolutionary book review laura elizabeth woollett scribe publications the AU review