Machines Like Me
Ian McEwan
Jonathan Cape Publishing (Penguin Books)
My copy provided by the publisher in exchange for review. 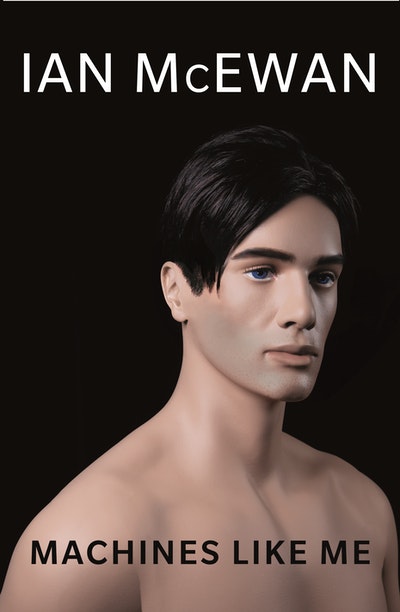 The Artificial Intelligence novel is hardly new. Novels which imagine the possibilities of the technology-- its potential for disaster as well as for progress -- have been a constant in the science fiction genre for a number of decades, but in recent times, we have seen an increase in the number of big name literary authors turning their attention to the concept. In 2019 alone, we have Frankissstein by Jeanette Winterson, as well as Ian McEwan's Machines Like Me, a counterfactual look at England in the 1980s, where the central changes in technology seem to hinge on the fact that Alan Turing did not in fact suicide in the 1950s. Both novels make reference to Mary Shelley's Frankenstein, a novel which began science fiction's preoccupation with the line between human and inhuman.

Machines Like Me is the story of Charlie Friend, a highly demotivated thirty something, living in a version of 1980s London where Britain has lost the Falklands War, and unemployment is extremely high, presumably thanks in some small part to the advanced technology which makes humans unnecessary for certain jobs. Charlie has, perhaps unwisely, spent 86 000 pounds of his inheritance on an 'Adam', one of 26 artificial humans which have been rolled out world wide. The 13 Eves were the first of the AIs to sell out, a fact which foreshadows the novel's later themes surrounding women's role in the new world and indeed in the real one outside the novel. Charlie spends his time playing the stock markets (unsuccessfully) and in a bold move to connect with his upstairs neighbour, Miranda, he decides he will share Adam with her and that they will both be involved in 'setting' his personality so that Charlie does not simply create a facsimile of himself in robot form.

Adam is highly technologically advanced, thanks in no small part to the masses of Turing's research which the computer scientist and mathematician has insisted on making available via Open Source publication. He has access to troves of information, and can learn and make decisions, in many instances making it possible for him to pass as a 'real' person when out in the real world. His adherence to the concepts of truth and what is right, versus wrong, however, means that he is unable to process the complexities of human behaviour, such as the various shades of grey within the spectrum of morality. As Adam learns and becomes more a part of the world-- and learns how to disengage his own 'killswitch'-- the concept of a 'happily ever after' becomes more and more abstract for our morally complex human characters. The novel seems to happily engage with Turing's own theories on the boundaries between man and machine, and whether or not machines can 'think.'

At times, the narrative of Machines Like Me is bogged down as McEwan attempts to get his reader up to speed on the new world he has created. The reasoning behind using an alternative 1980s, one assumes is to make it possible for Alan Turing to make a number of small cameos in the text. But I wonder if a character who was a student of Turing's might have served the narrative just as well, as the character did not ring true for me-- in fact it was Charlie's voice which reminded me more of the Alan Turing I have encountered in my own studies.

What was heartily surprising about Machines Like Me was the detour that it takes into examining the role of women in the new world order. Miranda's story, involving an incident from her past which is dredged up by Adam's deep dive into her online records, calls for the reader to understand when she entraps a man in order to get her own form of justice. Adam's initial warning to Charlie-- that she is a pathological liar and will harm him-- at first only fuel's Charlie's jealousy, particularly when Miranda invites Adam into her bed and Charlie overhears them. When she is confronted later, she asks Charlie if he would feel the same way about her using a vibrator, calling into question whether either of them truly see Adam as what he really is -- a machine-- or if his ability to learn and 'generate' his own personality makes him something more.

As we get to know the characters more, body autonomy and the right to protect the physical body become more and more important to Miranda. Though Adam has his own concept of this, in that he does not want Charlie to turn him off via the killswitch, and therefore 'accidentally' breaks his owner's arm (and Asimov's first law of robotics), he cannot translate his own need for self preservation into judging the actions of humans. The other robots in his 'set' also have trouble understanding their 'place' in the world as they become smart enough to understand it, but Adam's relationship with Charlie and Miranda (with whom he says he is in love) seems to save him, and bring him close to achieving 'humanity' in that he feels moved to write poetry and to read novels. His haikus, however, are largely clinical, and it is this final frontier that seems to separate his kind from ours -- that ability to understand the nuances of being human, and to translate it into art.

There is a lot packed in to just over 300 pages, and McEwan gives his readers a lot of food for thought.

I gave Machines Like Me three stars out of five.