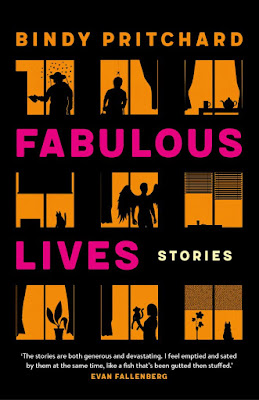 A Book Spotlight is not a review but a feature of a book by a person I know and admire.

In Perth author Bindy Pritchard's debut collection of short stories, the ordinary is turned extraordinary by degrees. Pritchard's characters, all of whom are dealing with situations that test them in some way, are confronted with the magical, the frightening, and the down right impossible, and even occasionally manage to see the miraculous in the mundane.

The first of the sixteen stories, titled 'The Shape of Things', is the story of Leonie, a woman who finds a young, naked man lying on the ground outside her apartment who may or may not be a fallen angel. In 'The Bees of Paris', Louise befriends a woman with a curious hobby after witnessing her falling off the roof of the apartment across the street and is drawn further into her life than perhaps she would like. In 'The Egg', Bryant discovers his own capacity for greed is larger than he would have hoped after his son and a friend discover a curious and possibly valuable object while out playing. And in 'In Memoriam', two very different family members are brought together by loss and find acceptance in each others' company.

It is hard to believe that this is Bindy Pritchard's first book, as the stories within are tightly crafted and convey their messages with great subtlety. The meaning of each piece can be simply what happens on the page, but if one cares to read deeply, there are layers of meaning and symbolism to be unpeeled. This is clearly a collection that has been written by someone who loves to read, and books, writing, and literature all make their way into the worlds of the stories. Her characters are multifaceted, and often manipulative and highly flawed, meaning that the collection showcases a full range of human interaction in an extremely satisfying way.

It is an accomplished collection, and one to either savour and read slowly, or devour in a day as I did. Whichever way you read it, it's one to read again and again.