Book Review: Love and Other Battles

Love and Other Battles
Tess Woods
HarperCollins Australia, 2019 (My copy courtesy the publisher) 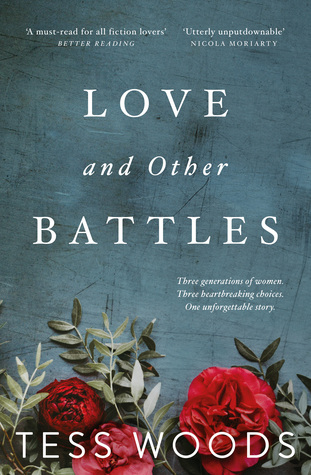 Three generations of women. Three heartbreaking choices. One unforgettable story.
1969: Free-spirited hippie Jess James has no intention of falling for a soldier ... but perhaps some things are not in our power to stop.1989: Jess's daughter, Jamie, dreams of a simple life - marriage, children, stability - then she meets a struggling musician and suddenly the future becomes wilder and complex.2017: When Jamie's daughter, CJ, brings home trouble in the form of the coolest boy at school, the worlds of these three women turn upside down ... and the past returns to haunt them.Spanning the trauma of the Vietnam War to the bright lights of Nashville, the epidemic of teenage self-harm to the tragedy of incurable illness, Love and Other Battles is the heart-wrenching story of three generations of Australian women, who learn that true love is not always where you seek it.

Love and Other Battles is something a bit different for Perth-based writer Tess Woods. While her previous two novels were classed by many readers as romance (though she once told me in an interview that the Romance Writers of Australia would not agree with that definition), her third book is a multi-generational story following three women from the same family. Grandmother Jess Jones is a Flower Child of the late sixties, who never expects the man of her dreams to turn up wearing a military uniform. But it is the time of the Vietnam War, and whether you're for it or against it, the conflict overseas is the topic on everyone's mind.

In the present day (or 2017, to be more specific), her daughter, Jamie, couldn't be more different. The principal of an elite high school with a competitive music program, she's as straight-laced as they come and has a penchant for fancy shoes. There is heartbreak in her past, with CJ's father, and the possibility of love in her future with a certain charming colleague...

Then there is Jamie's daughter, CJ, who is a student at Jamie's school. She's talented and smart and going places. But when the boy she likes starts paying attention to her, everything threatens to fall to pieces. CJ's relationship with this boy quickly escalates and soon CJ is way out of her depth. After things go too far, CJ takes dramatic action (and thankfully, this book does come with a trigger warning for self-harm and suicide). The character of CJ's boyfriend Finn is chillingly real, a teenage sociopath who can be adorable and sincere one moment and threatening the next. And thanks to social media and mobile phones, CJ finds it almost impossible to distance herself from the relationship, adding to a compelling sense of claustrophobia. It's clear from her handling of CJ's story (and for me, this was the heart of the book), that Tess Woods has a great understanding of teenage girls.

It would be easy for a novel with three very different strands and storylines to balance to fall apart, but Tess Woods gets the balance just right. This is a powerful portrait of a family of strong women and the hurdles they must overcome in order to succeed. Particularly poignant are Tess Woods' portrayal of granddaughter CJ's struggle with her emotionally abusive new boyfriend and the dramatic consequences of this. CJ's feelings of hopelessness permeate off the page, leaving this reader with a real senes of despair. The modern day storylines affecting CJ and Jamie are interwoven with the then and now of Jess's life story, providing context, perspective and tension to the plot.