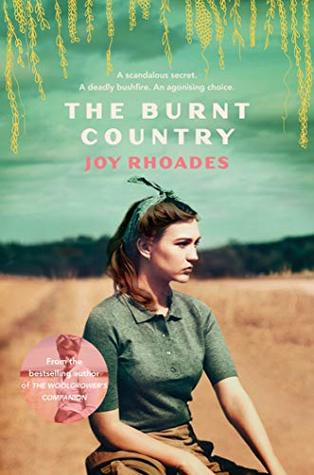 Two years ago, I reviewed a book called The Woolgrower's Companion which told the story of Kate Dowd, a young woman who had to take control of her destiny and begin running her family property during the turmoil of 1945. It remains one of my favourite Australian debut novels (and if you want to know why, you should check out that review.) Imagine my delight to discover that a sequel was due to be published this year.
The Burnt Country is Kate's story three years later. The war is over, and Kate has been separated from her husband Jack for some time, but that doesn't mean he's leaving her alone. Jack, aware that there is money to be had from Kate and her property Amiens, offers his estranged wife a deal-- pay him ten thousand pounds and he'll let her be the wronged party in their divorce proceedings. But if Kate can't pay, he'll petition for the divorce himself and he'll name her as an adulterer.


Things are already tough for Kate. Many of her neighbours resent her success, and as a woman alone running a sheep farm, she's subject to all kinds of scrutiny. What's more, Kate publicly acknowledges a young Aboriginal girl, Pearl as her half-sister, as it was discovered in the events of The Woolgrower's Companion that her father Ralph had gotten their domestic, Daisy, pregnant. In order to protect Daisy and Pearl from the attention of the Aborigines Welfare Board, Kate needs to keep her head down. And this means she can't afford people to talk about her and Luca Canali.

In the midst of all this, a bushfire starts on the boundary of Kate's property and her horrible neighbour, John Fleming's property, Longhope Downs.  In the aftermath, and the tribunal that follows, Kate will be forced to take steps to protect the people she loves, even if it means denying herself the great love of her life.

It was wonderful to be back in the company of Kate Dowd, and really interesting to see life after the love story in the first book.  The Burnt Country focusses on Kate, and what life was like for women in the post-war world, whereas in the previous book, there was as much focus on her father's decline and on the love story that developed with Luca as anything else. Kate's struggle to be taken seriously was mirrored by the introduction of a new character, Enid Morrisson, who is also a woman in a man's job.

What Joy Rhoades does incredibly well is explore the relationships between people, and evoke the loyalties that form in complicated ways. There are nasty characters in this book, sure, but there are also kind people like the Riley family and Luca, and Harry's grandmother Mrs Grimes. At times, I found myself thinking about Rosalie Ham's novel The Dressmaker as I was reading this book, as the complexity of a small community played out against the gender politics of the setting. There is much subtle historical detail throughout the book, and the time and place feel real and alive to the reader.

This was a wonderful book and a wonderful companion to The Woolgrower's Companion although I wouldn't read the second one without having read the first.