Book Review: The Year without Summer 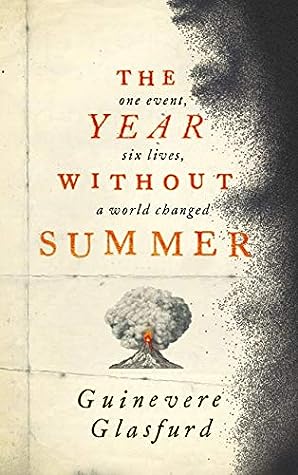 The Year Without Summer
Guinevere Glasfurd
Two Roads Books, 2020 (My copy courtesy of the publisher)

In 1815, a volcanic eruption at Mount Tambora, Sumbawa Island, Indonesia, causes destruction and chaos for the local populations. Villages are wiped out by the immediate effects of the eruption, and surrounding communities begin to starve to death as crops fail and animal life is sparse. A nearby ship, the Benares goes to investigate. Ship's surgeon, Henry Hogg is horrified not only by what he sees but by the callous reactions of his captain and shipmates, all of which he records in letters home to his wife, Emmalina.

Elsewhere in the world, the effects of the eruption are felt too. 1816 became known as The Year Without Summer, as climates around the world began to change due to the thick blanketing of smoke and ash drifting through the atmosphere.

Glasfurd's sophomore novel, the follow up to the highly successful The Words in my Hand, follows the lives of six individuals and the ways that their lives are changed over the course of the summer that wasn't. Some of her cast of characters is well-known, such as Mary Shelley, who embarked on a European trip with her husband, infant son, stepsister and the infamous Lord Byron-- a trip which would culminate in the fateful story telling competition that inspired Frankenstein. John Constable, painter, struggles with his work as the England which his landscapes are drawn from changes; he also struggles with familial expectations and opposition to his marriage. Less well known characters, Charles Whitlock (a preacher in Vermont trying to keep his community together during a brutal summer snow), Sarah Hobbs (an unlikely revolutionary) and Hope Peter (a soldier returned from the Napoleonic War to an ungrateful home town) round out the cast.

The effect is a multi layered portrait of a moment in time, well-written and extremely well-characterised, as most of the six voices are truly distinctive from one another. Some of the storylines were much more intriguing than others, chief among them that of Sarah Hobbs. Sarah, a farm labourer who has been laid off by one greedy farmer, finds herself cleaning the middens for another under the watchful eyes of a horrible foreman she calls Mutton Chops. Labouring in literal shit for hours a day for only a penny (and sometimes not even that), she is maligned and threatened and intimidated, until finally she's had enough and joins with other starving day-labourers who march to the magistrates of the surrounding villages demanding a reasonable price for bread and a basic living wage. When the group go too far, and vandalise the house of a local clergyman and his (horrible) wife, they find themselves too far into the wrong side of the law.  Sarah's section of the book is one of the only ones told in first person. Her voice is distinctive, and her sections are written in a kind of vernacular specific to her class, education, and geography. As a result, her story feel immediate, and you sympathise with her instantly.

Other sections, told in third person, were not so easy to connect with, and seemed to not have much going on in them. At times, Constable and Whitlock's sections seemed entirely interchangeable as far as plot went, with subtle differences in language used the only thing to set them apart.

While an accomplished novel,  I think The Year Without Summer might have benefited from having had it focus less divided. A novel about Mary Shelley would have excited me greatly, and I think if the novel had been about Sarah or Hope Peter (or both), that would also have been a really interesting perspective to take. But the effect of splitting the story six ways (and having the 1815 sections between pieces of the 1816) lessened the impact of the story, and took the focus away from the climate change message of the story. Glasfurd is an accomplished writer and researcher, which is very clear from the way that she writes, but the message was watered down, and the book did not do what it set out to do.

Hard to give this one a star rating, because it was only in thinking about it afterwards that most of my critiques came to mind-- so read it for yourself and let me know your thoughts.
Labels: book review climate change fiction guinevere glasfurd hachette australia historical fiction mary shelley the year without summer two roads books