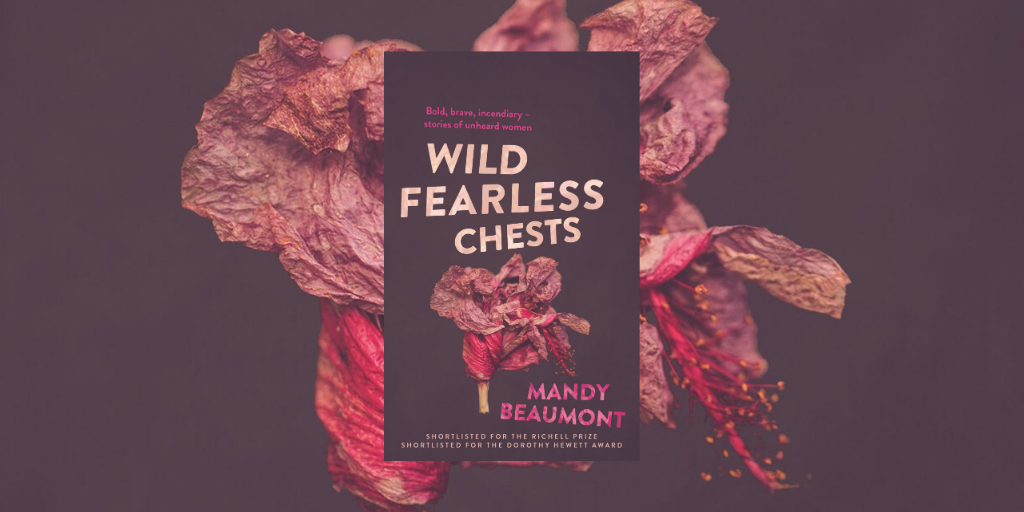 The line between short stories and poetry is thin in Mandy Beaumont’s debut collection, Wild Fearless Chests, which was published earlier in the year by Hachette, off the back of a shortlisting in both the Richell Prize and the Dorothy Hewett Award run by UWA Publishing.

The collection readers were promised was a catalogue of the darker side of female experience. From the book’s own back cover, the reader is warned to expect the ‘brutal and uncompromising.’ Right from the get-go, from the opening story “Drowning in Thick Air”, the book delivers on that promise.

Beaumont’s collection is an unflinching look at the physical and emotional violence perpetrated by and against women, set against a background of a nameless Australian suburb. The women in the stories are often nameless too, and in most cases, their stories are told from a detached third person perspective, leading to a chorus of ‘she’ and ‘her’. The effect is disorienting at first. If the ‘she’ of each story is supposed to be the everywoman, then the sameness of the experiences showcased seems to work against the technique. But, what it actually does is develop a style which is consistent throughout the book, one which drags the reader firmly into a realm where the familiar has been rendered anything but.

Many of the stories have overlapping themes and scenarios, none more so than “Weight” and “Bright Light and All Brilliance”, the latter’s title appearing as the former’s final line. Images of women’s breasts, of sounds oppressing a person, of body fluids, and of suicides repeat themselves throughout the collection. As does an exploration of the line between sexual desire and sexual violence. And these storylines– so common, yet so seldom discussed– are not only told from the female perspective.

In the story “Emily”, the unnamed male narrator acts upon his consuming desire to possess his beautiful neighbour with tragic consequences. In the story “Drinking Makes Your Heart Ache More Than It Should”, you, the narrator, recount the way you ended a relationship with a young woman who loved you, and how you regret it in heartbreaking prose. It is the kind of story most people will wish their ex-partners could read.

At times, the unceasing nature of the violence in the pages works against the novel, dulling the impact as one story moves to the next. The descriptions of female anatomy, often deliberately blunt and using terms I’m not sure we can use on this website, repeat so often that they fail to shock by the end of the piece. Likewise, the distance that is deliberately built between the reader and the characters takes away from the immediacy of the subject matter.

There is little dialogue in these stories. But, likewise there are also few scenes, with most storylines taking place in summary, or as poetic lists where punctuation and language become the author’s playthings. But, perhaps the author has done all of this on purpose, knowing that it will force her readers to savour the collection. To read a little at a time, rather than devouring the whole brutal collection in one greedy sitting.

From the list of notes at the end of the book, it’s clear that Wild Fearless Chests is a collection which continues a conversation feminist literature has been having for the greater part of the last few centuries. It’s a devastatingly smart collection. But, one that will fill your soul with dread for at least an hour or two after reading.