Book Review: All Our Shimmering Skies by Trent Dalton 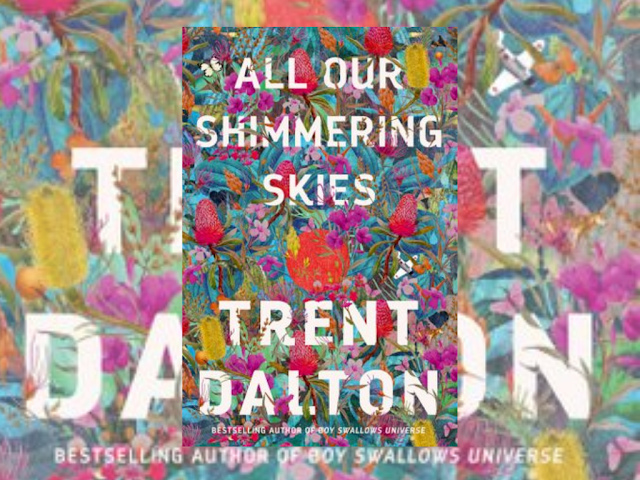 When Trent Dalton writes a book, it really feels like he doesn't hold back. He throws in everything but the kitchen sink. If you were to try to explain his plots to someone, they sound almost farcical, almost a little bit too much, but when you're immersed in the experience of reading them, they just work.

Take Dalton's second novel, for example. Set in Darwin during the Second World War, the story follows Molly Hook, who is the gravedigger's daughter. We first meet Molly at seven years old, on the last day she ever sees her mother alive. Her mother explains to her about the curse that ruined her grandfather's life and has doomed all of his family to have their hearts turned to stone. She tells Molly about sky gifts, and then she asks Molly to close her eyes. When Molly opens them again, her mother is gone and a gold mining pan that belonged to her grandfather has appeared, as if it fell from the sky. Five years later, Molly is being 'brought up' by her fairly useless father and her cruel and greedy Uncle Aubrey. Everything changes when the Japanese bomb Darwin, and Molly sets off on a quest with aspiring actress Greta Maze (not really a coincidence that her name makes you think of Great and Amaze) to find a sorcerer called Longcoat Bob to ask him to take the curse from her family.

A twist on the quest novel, there are challenges to be faced along the way. Molly's indomitable spirit and Greta's maternal strength carry the women through the book and through these challenges. At times, the book veers into magical realism territory but has a very Australian point of view. I've never read anything quite like it. It was certainly an emotional roller coaster ride... I don't usually cry whilst I'm reading (unless a book has a dog dying) but there was one scene, in the Hollow Wood Cemetery, where I came close. There were also thrills, laughs, and beautiful, poetic moments.

Will this book live up to the popularity of Boy Swallows Universe? I'm not sure, but in my opinion, this is the better book, and frankly, I'm very impressed that Dalton was able to write two books he clearly poured everything into so close together.