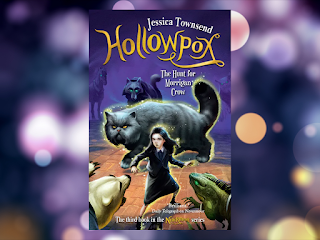 I was provided a reading copy of this book by Hachette Australia in return for an honest review.
The latest instalment of the Nevermoor series is here, and I am here for it.
In Hollowpox: The Hunt for Morrigan Crow, young Wundersmith Morrigan Crow is finally allowed to begin learning about her new abilities in a secret part of the Wundrous Society on level sub-nine. There's a catch though. Because there hasn't been another Wundersmith in Nevermoor for a century (not since Ezra Squall, who gave all Wundersmiths a bad name), there's no one alive who can teach her. But that's okay, this is Nevermoor, a place where the laws of physics are only a technicality and your most prized possession is your umbrella. Through the use of a peculiar form of magic, Morrigan begins to learn her craft from the Wundersmiths of past eras, and learns that the history of her craft is not exactly as she's been led to believe.
Meanwhile, a pandemic affecting the humanoid animals of Nevermoor (the Wunimals) is causing chaos across the city. The Hollowpox turns the Wunimals back into their animal selves, causing them to attack others before falling into a comatose state. As a result, the city is divided, and some groups use the attacks as a platform to release their anti-Wunimal bigotry into the world. Can Morrigan and her friends from Unit 919 save the day? Or will Morrigan have to make a bargain with Squall, the notorious exiled Wundersmith who may just have created the problem in the first place?
First of all, can I just say that I'm almost thirty years old and I love these books. They're smart, funny, and often have big messages behind them. Hollowpox has its publication delayed from January 2020 for non-pandemic related reasons, but it's most likely the better book for it. There is evidence that the author has reflected some of the things she's seen in the world during the COVID-19 pandemic in crafting her Nevermoorian responses to the Hollowpox. The result is a sophisticated parable that will open up discussions with young people not only about public health, but about ethics and about the ways that big, world-scale change can lead to an explosion of ideologies. In the real world, I don't think it's a coincidence that alongside public health, 2020 has also been a year of discussions about Black Lives Matter, and about the rights of transgender, non-binary and gender diverse peoples. (Important discussions, but I can go into them in more depth when I'm not reviewing a children's book perhaps. I've been reading a lot about Nazi Germany again in case you can't tell.) I'll keep it short and sweet by saying these are best-selling children's books for now for very good reason. They reflect our world as it is but also send a powerful message about how it could and perhaps should be. Pretty impressive for a book with giant Magnificats and party planning Vampire Gnomes.
Townsend doesn't write down to her readers either, but recognises that they are intelligent and curious people. By this stage, she's got a hard task ahead of her, as her audience is made up of people of all ages, but so far she's proven herself up to the challenge. The chapters in Hollowpox set in the Gobleian Library had me roaring with laughter. There is silliness in these books but also a wry wit-- and links galore to other imaginative worlds, proving that this book is truly one for the booklovers.
I can't wait to see what Morrigan and her crew do next.
Five stars.
Labels: australian authors australian book review book review children's books five stars hollowpox morrigan crow nevermoor