Book Review: Eye of a Rook by Josephine Taylor 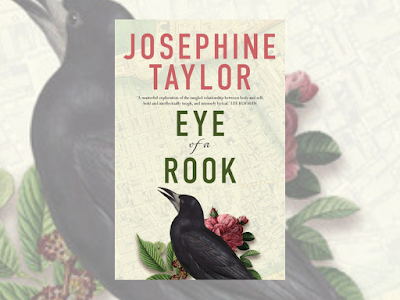 Eye of A Rook

(This review was originally published by the AU review on February 11, 2021)

Josephine Taylor‘s debut novel is something a little bit different for Fremantle Press. Mixing historical fiction with contemporary, Eye of a Rook takes a look at women’s health throughout recent centuries, shining a light particularly on attitudes to chronic illnesses and women’s pain. Based on the author’s own experiences with vulvodynia, Taylor hopes that this book will spark a conversation about invisible illnesses, and about believing that those who suffer are not simply malingerers and attention seekers.

Eye of a Rook begins with its contemporary storyline. Alice and her partner Duncan are driving to see a new physiotherapist recommended by another member of Alice’s support group for vulvodynia sufferers. Vulvodynia – chronic, debilitating and unexplained nerve pain in the vulva which cannot be linked to a specific cause – has made many things near-impossible for Alice.

Walking and sitting are painful. She has not been able to work. And her once-passionate marriage to Duncan is feeling the strain as sex becomes less and less possible. Alice wants to be able to engage in sex again, and hates what her condition is doing to her relationship.

This is why she has made the appointment with a new (male) physiotherapist. But it is clear from Duncan’s mood as he drives them to the appointment that he is threatened by the intimate nature of Alice’s appointment. It is also clear that he does not fully comprehend the extent of Alice’s suffering. He says, “I’m wondering how much you want to get better.”

Such sentiments will likely be familiar to those with chronic conditions. It is a scenario Alice encounters multiple times throughout the book as she attempts to find a method of easing the pain. There are doctors who prescribe treatments which make her worse. And there are those whose inability to understand her illness makes them callous and uncaring. When paired with the vulnerability of literally baring herself to these medical professionals, the implication that she is “dragging this on a bit” comes like a slap in the face.

Alice, an academic, turns to research in an attempt to understand the lineage of her condition. Her studies lead her to Mr Isaac Baker Brown, a surgeon who was at one time President of the Medical Society of London. A proponent of the cliterodectomy as a treatment for various ‘women’s troubles’, Alice begins to uncover the extent of the damage done to women like herself throughout history.

Set in Baker Brown’s time, the second storyline of Eye of a Rook is the story of one of his patients, Emily. Like Alice, she develops vulvodynia and finds herself largely confined to a spinal couch, desperate for any remedy that might restore her to herself. Emily’s story is mediated through the experience of her husband, Arthur, and through her letters to his sister-in-law Bea – an authorial choice which mimics the lack of voice women had in advocating for their own rights.

Arthur’s point of view is frequent at the beginning of of the novel, and then is replaced by Emily’s letters in the middle of the book before returning again at the end. I would have liked to have seen these two viewpoints each have a more complete arc of their own rather than being linked together, as the sudden appearances and disappearances of the voices made for a disjointed reading experience in parts.

But, the slow reveal of how these two storylines intertwine towards the end of the novel, as well as the juxtaposition of the two relationships (Alice and Duncan, Emily and Arthur) make for a clever, postmodern finale. One which will reward the reader who perseveres through to the end.

While this is not a pleasant read (it makes one very aware of their own bodies) it is an important and powerful one which both showcases the versatility and the insightfulness of its writer. I was literally punching the air in parts as Alice grew into a stronger person through her pain.

To read more book reviews from me, and the AU review team, click HERE.