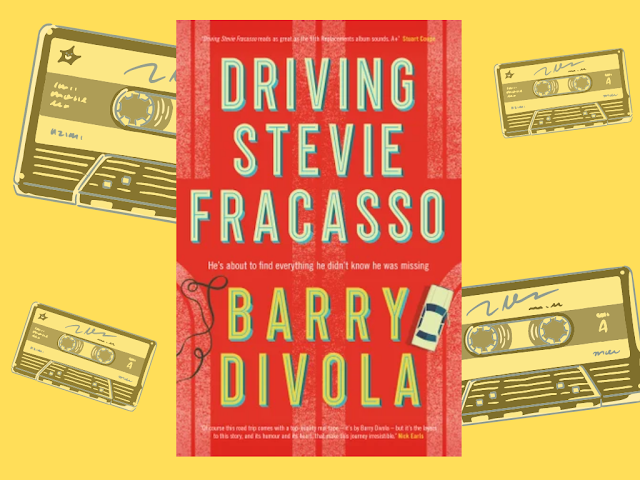 The back cover of Barry Divola‘s debut novel Driving Stevie Fracasso makes some lofty claims. It promises High Fidelity meets The Big Lebowski meets The Darjeeling Limited; it promises Nick Hornby, David Nicholls and Jonathan Tropper vibes. Picking it up, I thought to myself that this one novel could not possibly live up to all that.

But here’s the thing, it can, and it does.

Driving Stevie Fracasso is the story of Rick McLennan, a music journalist who has just turned forty. His girlfriend of seven years, Jane (whom he struck up a conversation with in the first place because she was wearing a Boston t-shirt and looked so uncool that she was therefore possibly the coolest person ever, if that tells you what kind of people these characters are) has just broken up with him, leaving him without a place to live. The small free music magazine that he’s been reviewing for has just fired him for having a bad attitude. When an indie publisher named Hunter contacts him and asks him to write a short book on Stevie Fracasso and the short-lived cult band Driven to Distraction, he kind of has no choice but to say yes.

Also, Stevie Fracasso is his older brother, and they haven’t seen each other for thirty odd years.

As part of the job, Rick has to drive to Austin to pick up Stevie (who doesn’t fly) and drive him back to New York for a special, one night only gig. So begins one of those road trips where strange characters and mini-adventures abound. The trip will force Rick to reassess all of the family drama that drove him and Stevie apart in the first place, and he might just learn a thing or two about himself while he’s at it.

Driving Stevie Fracasso is one of those funny, clever books that demands you read some of the pithier sections aloud to whoever happens to be around you. Like the protagonist of High Fidelity before him, Rick McLennan is both smarter than everyone else when it comes to music, and completely clueless when it comes to any kind of relationship. He may be forty, but he’s got a lot of growing up to do, and being a supreme snob about music will only get you so far. (Seriously, I would never let Rick OR Barry Divola look at my CD collection or my Spotify history.)

Divola spectacularly creates a world of diehard music fans and grungy 90s New York dive bars, peopling it with a combination of real and imagined (but plausible) performers and critics, capturing both a love for the city of New York and for rock and roll music on the page.

Eliot Toastman, fellow reviewer and friend of Rick’s, teaches Rick that in order to be a great music journalist, you have to take a strong position and stick to it, and that is what this book does, and where much of its humour comes from. I laughed out loud as one of the characters said that “Sunday Morning” was their favourite Velvet Underground song because it sounded like it had been written after Lou Reed had just woken up from a wonderful dream in which he was not Lou Reed. Infamously nasty to journalists, Reed takes a bit of a punching from Rick, whereas bands such as The Beatles are worshipped like heroes and linked inextricably to Rick’s coming of age.

The structure of the book mixes these semi-flashback like scenes of Rick remembering things about his childhood with scenes in the present day. I think there are even times where he takes a tangent from his tangents, but this just seems to be the way that Rick’s brain works. His voice is so completely developed that this isn’t jarring to the reader, or confusing, and in fact, if you stick with it, there’s always a point. Despite this book being one of the funniest I’ve read in a long time, there were moments where I was genuinely on the edge of tears.

Another comparison to High Fidelity comes from Rick’s terrible behaviour towards the women in his life, namely Jane. In fact, a few of Rick’s attitudes just wouldn’t fly in the media of 2021 – but his attitude needing to change so that he can be happier is kind of the point of the book. Rick is messed up; his family have messed him up, and music has always been the way he’s understood everything. Over the course of the book, and the road trip contained within it, Rick might just have to realise that it’s okay for things to change, whether they be people, sounds, or cities.