Book Review: She is Haunted by Paige Clark (Allen and Unwin) 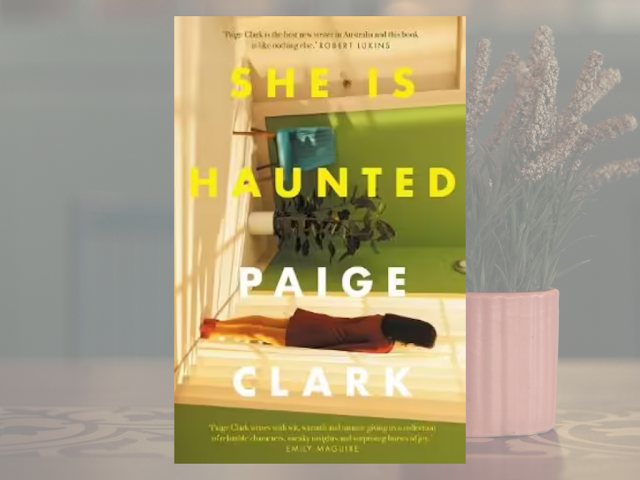 A mother cuts her daughter’s hair because her own starts falling out. A woman leaves her boyfriend because he reminds her of a corpse; another undergoes brain surgery to try to live more comfortably in higher temperatures. A widow physically transforms into her husband so that she does not have to grieve.

This is She is Haunted, the debut collection of short stories by Asian/Australian/American writer Paige Clark. It is the short story collection that everyone was (or should have been) talking about this July.

As its title suggests, She is Haunted is informed by grief and death. In the opening story (“Elisabeth Kubler-Ross”), a woman bargains with God not to take her lover, instead allowing the deity (who is surprisingly both human, and persuadable) to take her elderly mother instead. In “Times I’ve Wanted to be You”, a woman whose husband has recently died begins to dress and act like him as a way of both keeping him with her and staving off her own grief. The titular story, “She is Haunted” is narrated by a woman who has died as she watches her family go on without her.

Clark also uses her collection to explore other kinds of loss and haunting too, often bringing in slightly futuristic or bizarre framing concepts, such as in “Gwendolyn Wakes”, where the protagonist works at a government call centre dedicated to advising jilted lovers.

Though relationships are largely at the centre of the collection, there are also stories which meditate on the future of our world: post pandemic and post climate change. One of the longer stories, “What We Deserve”, for example, is set in a retirement home where hygiene practices are ramped up for the ‘protection’ of the residents. While there are references that might make you think of the events of recent years, Clark is very precise in not making it a pandemic story. Rather, oblique references to things that were strange to us a year ago – mandatory masks, quarantine – are spoken about as commonplace and accepted.

In “Amygdala”, the protagonist wakes up after having voluntarily had surgery on her brain to help her cope with the temperatures that regularly get above fifty degrees, yet it is not really a science fiction story. The focus is on the people, their experiences, and the evolution of their relationships to one another when impacted by these external circumstances.

Clark is measured with all of her language choices throughout She is Haunted, and it is clear that she both enjoys and respects the power of words. But, nowhere is this more apparent than when she is being political. Her work clearly recognises the inherent political nature of existing in the world today, that it is always present in the background of people’s lives.

Never one to labour the point, her writing style is polished, deliberate and pared back for maximum impact. While I am sure that there are other references in her work, the most apparent influence to me seems to be that of Margaret Atwood; the opening line to the title story (“I know a lot of things now that I am dead.”) is a direct reference to The Penelopiad.

Haunting is exactly the word that I would use to sum up the effect of reading this book; even a week after closing its final pages, I still think about re-reading it. It may be a little too out there for some readers, but I was captivated from the first story, and know that it will be a book I return to again and again.