What I've been reading: The Hush by Sara Foster 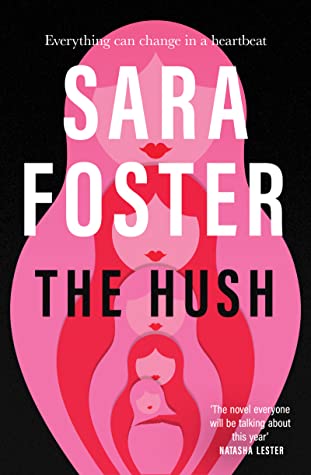 I wanted to take a second to rave a bit about a book that I have just finished reading.

Sara Foster's latest book, The Hush, was released late last month. In many ways, it was like a second debut for Foster, whose six previous books were all psychological thrillers set in the quote/unquote 'real world'. The Hush is still a thriller, but it does have one notable difference- it's set in a dark, possible future ten years post pandemic, and it has a dystopian feel to it that feels like an updated nod to The Handmaid's Tale. There is a different sort of medical emergency gripping the public's attention now, and this has led to an increasingly disturbing number of government mandates curbing the public freedoms of British citizens, in particular women.  After an alarming rapid increase in the number of unexplainable stillbirths among the population, conspiracy theories begin to run rife. The novel begins with discussion of a video that has been posted on Youtube, in which an anonymous artist known as PreacherGirl exposes a disturbing trend in pregnant teenagers and their families disappearing. And one of our two main characters, sixteen year old Lainey, believes she may be about to become one of them.

The Hush is a smart, exhilarating story of the bond between a mother and daughter caught in the middle of this political and social turmoil. Lainey's mother, Emma, knows more about what's happening in birthing suites than anyone, being one of the overworked nurses who is having to deal with the crisis each and every day. But when her own daughter seems to have been caught up in the very darkest parts of the government's secret keeping, she's forced to take drastic action. Likewise, when politically engaged Lainey finds herself in the exact kind of danger she's been protesting against, her resolve will be tested in ways that she never expected. And both of them will have to turn to a person that they never wanted to need help from.

The cast of this novel is made up predominately of strong, realistic women. Both Emma and Lainey could be called the books' 'heroine', challenging the notion that courage is only for the younger generation. In fact, it is the mothers and the grandmothers who lead the way, and lead by example, inspiring the younger characters to act in the ways that they know best-- art, social media, protest etc. The teenage characters feel particularly authentic for now, as Foster has created a core group of friends at the heart who are motivated, informed and willing to take risks for what they believe in, reminiscent of the teenagers leading the way with the climate marches that have taken place across Australia int he past years. Her writing skilfully captures the precariousness of being young and idealistic and full of bravado, whilst also being in the vulnerable position of needing to finish school and pass exams and assignments. Lainey in particular seems to have a wide-eyed sense of innocence and anxiety, even as she is being tear-gassed by police and marching alongside her more vocal and extroverted friend, Sereena. She is a girl who loves animals, and yet takes charge when it comes to the boy she likes. Lainey is not in any sense of the word, a victim.

Likewise, Emma is a tough and compassionate nurse who has raised Lainey on her own, with only the help of the elderly grandmother who raised her after her own mother bowed out. There is a strong sense of matrilineal power that these two characters seem to have inherited, and this only solidifies the theme of motherhood as a mighty force.

I could not and did not want to put The Hush down, so do yourself a favour and get a copy from your local indie bookshop.