Book Review: If You're Happy by Fiona Robertson 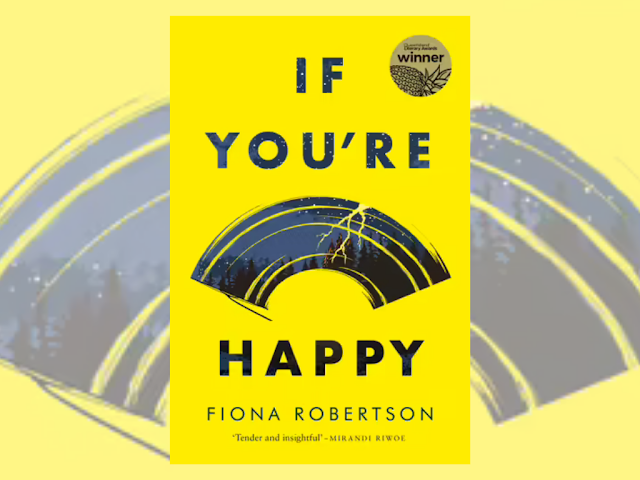 This review was originally published by The AU Review on March 24, 2022.

“They are having sex when the wind starts up, whispering and sighing outside.”

So opens the first story in Fiona Robertson‘s Glendower Award-winning collection, If You’re Happy. The University of Queensland Press team are no strangers to publishing powerful short fiction that challenges the conventions of the form in this country; counting among their authors Stella Prize longlisted SJ Norman, national treasure Tony Birch and 2021 Steele Rudd Award recipient Laura Elvery. Robertson easily takes her place among these literary heavy hitters with her debut collection, a catalogue of people reaching their breaking points and deciding whether to fight on or to give in.

The collection opens with “Tempest”, an impactful snapshot of a marriage that takes place during a Texan Hurricane. At first, all seems well between Shelley and Jay. But, as Shelley stands facing down the eye of the storm, she has a moment of clarity about her life which may or may not pass with the coming danger.

It is one of a number of stories in this collection which centres around a natural disaster of some kind – a sinkhole in the backyard of a recently divorced woman is the central concern of “The Ground Beneath”. And in “Aftershocks”, a grieving daughter who works on a cancer ward must come to terms with being shown a different side to a favourite patient who has become a kind of surrogate mother to her. There are accidents that take place on snowy mountains, characters who almost freeze to death in record snowfalls, and characters who reassess their choices as they find themselves stuck inside flooded caves.

Nature is truly a wild card in this collection, both unpredictable and menacing. Yet human nature can also be the cause of chaos, as Robertson shows us in stories like the eponymous “If You’re Happy”. In this story, a childless man rescues an abandoned child from a car outside his apartment building. He calls the authorities, yet by the time they arrive, he’s formed an attachment to the child and does not want to hand the baby over. Here, as elsewhere, Robertson deftly shows the reader how even the most reasonable of protagonists can somehow do unreasonable things.

Many of the pieces in If You’re Happy might be described as a kind of flash fiction. They provide the reader with a brief snapshot into some sort of personal hell, such as that of “Birthday Wishes”, in which an elderly woman mourns the gradual decline of her beloved husband. Some take on a hint of the magical, such as “Last Game” and “The Fluttering”, whereas others are brutally grounded in the real world. The collection showcases the dexterity of its writer within a form that can contain as many genres and styles as any literary canon.

Robertson is clearly a student of the school of leaving them wanting more, a popular approach in Australian short fiction. And she often ends her stories right at the moment where the reader has finally worked out what the point of the whole piece has been – something which is both deeply frustrating and, for lovers of short fiction, highly addictive. She ends her stories at such an early point in many cases that it leaves the reader’s head spinning, meaning that this collection won’t be for everyone. But for those who love to be challenged, it makes it a collection that begs for immediate rereading.

There are twenty-four stories in this collection, each one with a vivid setting and lifelike characters. Though the book does seem to zip all over – thematically, geographically, and in terms of the point of view – there is a sense of unity pulling this book along and a logic to the way the book has been laid out. Were there some stories that pulled harder than others? Absolutely.

And yet, within the pages of If You’re Happy, the eagle-eyed reader may be able to chart the progress of a writer who we won’t have seen the last of yet. If you’re happy about this and you know it, clap your hands.

FOUR STARS (OUT OF FIVE)

Fiona Robertson’s If You’re Happy is available now from UQP. Grab yourself a copy from Booktopia HERE.