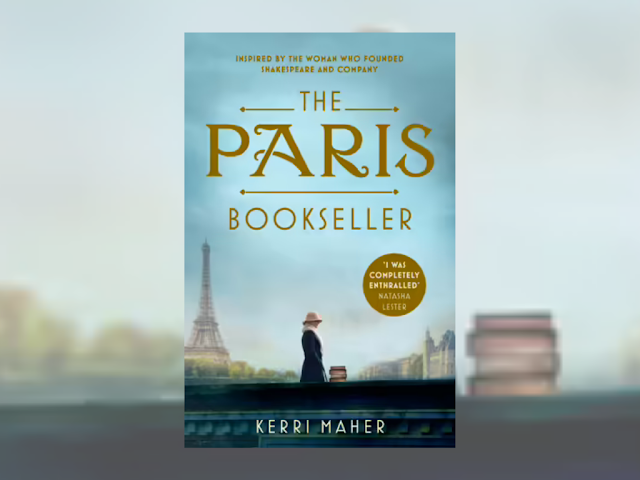 This review was originally published on The AU Review on March 4, 2022.

Kerri Maher’s latest novel, The Paris Bookseller, is bound to appeal to fans of bestselling author, Natasha Lester. Not only does it take as its setting Paris during the 1920s, but it features at its core the little known history behind the setting up of the iconic Shakespeare and Co bookshop.

Readers may be interested to know, as I was, that the Shakespeare and Co bookshop as we know it today is actually the second iteration of the store; the first having been set up in 1919 by Sylvia Beach and closed during the Second World War. Legend has it that the shop was ordered to be closed down after Beach refused to sell a copy of Finnegan’s Wake to a Nazi officer; but when the officers returned later there was no trace of the store to be found. Friends of Beach’s (among them, perhaps, Ernest Hemingway) had helped her to hide all traces that there had ever been a bookshop in that spot. But I am getting ahead of myself, and ahead of this wonderful novel.

The Paris Bookseller is the story of Sylvia Beach, a young woman who loves books. She writes, true, but her real passion is for reading and for connecting books with readers. Inspired by the woman she loves, who runs a French language bookstore, American ex-pat Beach decides to set up an English language bookstore nearby; something she accomplishes with a little help from her mother’s savings account.

Soon, Shakespeare and Co becomes the centre of the literary community consisting of writers such as Hemingway, Stein and (much to Sylvia’s delight) James Joyce. Sylvia idolises Joyce and when she hears that the great man is in Paris, lives in hope that he will come to her shop. She gets more than she bargained for, however, when Joyce becomes something of a friend – if indeed, James Joyce could be said to have had any of those.

Joyce appears to be afflicted with a problematic ego. One which means that all his relationships are about how others can serve him and not the other way around. People seem to forgive him because he is ‘a genius.’ He lives off the charity of others, and when his work in progress, Ulysses, is banned in the United States for being obscene, Sylvia comes to his rescue. She will publish the book, under the umbrella of Shakespeare and Co. The novel tells the story of exactly why this is the only book the store ever published.

The writing in this book is exquisite, taking the reader not only to Paris but back in time. Bibliophiles and history buffs alike will rejoice in the detail and atmosphere that Kerri Maher creates on the page. I found myself thinking not only of a comparison to Natasha Lester, but also to Paula McLain‘s enduring breakout novel, The Paris Wife, and last year’s sensational The Paris Library by Janet Skeslien Charles. Perhaps I just have a liking for books about literature set in Paris. But, if that’s the case then the publishing world does too, because the appetite for this sort of book shows no sign of slowing down. (And speaking of appetites, whilst reading this book I had to fight a strong urge to wander down to the patisserie on a daily basis in search of croissants.)

Maher’s approach to using real people in her novel shows a deep respect for the people she is portraying. Even the mercurial figure of Joyce, portrayed here warts and all with his bad behaviour and constant taking of advantage, is treated with sympathy. Maher’s approach seems to acknowledge that relationships are often far more complex than historical research can ever seek to show. She explores Beach’s life and her friendships with a sense of care. Likewise, the inclusion of LGBTQIA+ characters, and the related discussions of the attitudes of the time are included in a sensitive fashion, rather than to sensationalise the book or make it feel more cosmopolitan. Sylvia’s preference for women is laid out on the page from the very beginning, and isn’t revealed as something shocking or traumatic to be overcome– she just is.

If you’re looking to travel to Paris in the 1920s; if you loved Midnight in Paris; or if you’re interested in literature and the history publishing, then this is the book for you. You don’t even have to have read Ulysses.

FIVE STARS (OUT OF FIVE)

Kerri Maher’s The Paris Bookseller is out now through Hachette Australia. Grab yourself a copy from Booktopia HERE.