I went to see SIX the Musical in Perth last night after many years of hearing about how great it was. If you're not familiar with the concept, SIX is a kind of rock opera/ pop concert type show in which the six wives of Henry the Eighth are reimagined as pop divas competing for the role of 'lead singer in the band.' The competition? To see which one of them endured the worst treatment (and sometimes abuse) from their royal husband, Henry the Eighth. It's funny, clever, and full of girl power moments that had me cheering myself hoarse. It's currently on at Crown Theatre so do go see it if you can.

- The Plantagenet and Tudor Novels by Philippa Gregory

My introduction to the Tudor era came through reading Philippa Gregory's The Other Boleyn Girl, as I'm sure is the case for many armchair Tudor enthusiasts. This novel is the most well-known of a series which looks at a number of women from the Tudor and Plantagenet courts, including Elizabeth Woodville, Elizabeth of York (Henry VIII's mother and Grandmother). Though I'm less of a fan of PG's other works, like the recent Fairmile series, I love her version of the Tudor court and the way that she mixes historical record with courtly intrigue, rumour and imagination. Some of her plotlines need to be read as conjecture and not fact, but that's what you should always do when you choose a novel over an historical account, right?

My favourite of the series is the Katherine of Aragon novel, The Constant Princess. This was the basis for the STARZ series, The Spanish Princess, and the prequel series The White Queen and The White Princess were also based on these books. (We pretend the movie version of The Other Boleyn Girl doesn't exist.)

- The Six Tudor Queens series by Alison Weir
Alison Weir is the 'top-selling female historian in the United Kingdom' according to her biography, and has written non fiction and fiction about a number of historical figures from this period. Her most recent work has all been fictional, including a series of six books devoted to the six wives, and a standalone novel about Elizabeth of York called The Last White Rose. Weir's approach is more comprehensive than Gregory's and each novel is quite chunky. This is surprising given how some of the Queens had shorter marriages (and lives!) than others, and less is known about them, such as is the case with Jane Seymour. Again, there are moments where rumour and conjecture has to stand in to make up the gaps in the historical record, but Weir's portraits of these women does steer the reader away from relying on stereotypes. Her portrayal of Anne Boleyn takes her from conniving temptress with no morals to feminist pioneer, and for that reason, Anne Boleyn: A King's Obsession is my favourite book in the series.
- The Wolf Hall trilogy by Hilary Mantel
I was heartbroken when Dame Hilary Mantel passed away earlier in the year. Her novel, Wolf Hall, following Thomas Cromwell in the court of Henry the VIII around about the time of 'The King's Great Matter' (i.e. his attempts to divorce Katherine of Aragon and marry Anne Boleyn) was released in 2009 and won that year's Booker Prize. The sequel, Bring Up the Bodies came out in 2012, which was the year I began bookselling. I remember buying a copy of it as the first thing I got with my staff discount! The finale, The Mirror and the Light came out in 2020. This trilogy does show portrayals of several of the Queens (although not  Catherine Parr, as Cromwell was beheaded before she married the king-- he was beheaded a few days after Henry married Katherine Howard.) More literary in tone, this is a slower read but it's really worth the time and effort, and once you've read the books I do recommend that you watch the excellent BBC series with Mark Rylance as Cromwell.

I've just pulled all of the books about Queens and medieval ladies and lords sitting on my shelves that I've yet to read... as you can see, there are quite a few! There are also some I'd like to read that I don't have here, or haven't put in the picture. I've attached links to the Fantastic Fiction or Goodreads page for each, so feel free to click through if you're looking for something else to read to scratch your SIX itch! 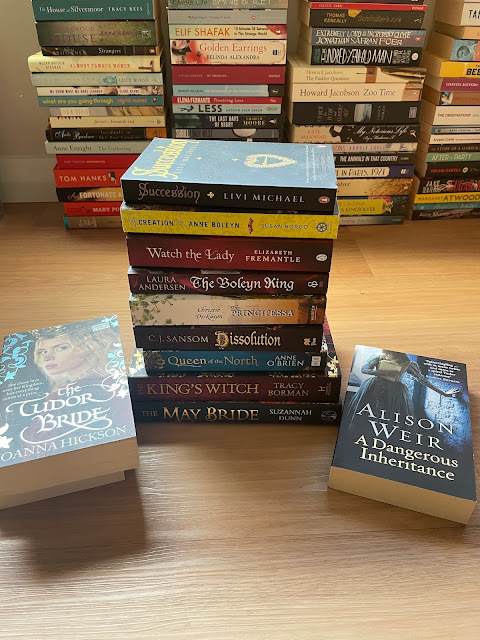 - The Agincourt Bride and The Tudor Bride by Joanna Hickson (about Catherine de Valois, Queen Consort of Henry V)
- A Dangerous Inheritance by Alison Weir (about Lady Katherine Grey, sister to Jane Grey, the Nine Days Queen)
- Succession by Livi Michael (about Margaret of Anjou, Queen Consort of Henry VI)
- The Creation of Anne Boleyn by Susan Bordo (Non Fiction)
- The Queen's Gambit, Sisters of Treason and Watch the Lady by Elizabeth Fremantle
- The Boleyn King by Laura Andersen
- The Principessa by Christie Dickason (court of James I)
- Dissolution by CJ Sansom (first book in the Matthew Shardlake series, mysteries in the Tudor court)
- Queen of the North by Anne O'Brien (Court of Richard II)
- The King's Witch by Tracy Borman (Court of James I)
- The May Bride and The Confession of Katherine Howard by Suzannah Dunn (Jane Seymour and Katherine Howard respectively)
- Cecily by Annie Garthwaite (Cecily, Duchess of York, great grandmother of Henry VIII)
- Young and Damned and Fair by Gareth Russell (Non Fiction about Katherine Howard)
Have you read any of these, or have you read something about the Six Wives that I might like? Let me know in the comments!