It's been a bit of time between blog posts.

So much has happened this year.

I've been adjusting to my new role as a librarian, working (somewhat sporadically) on two novels, and most recently, I've been moving house. There also seems to be all manner of chaos going on in the world at the moment. It's relentless-- after the horror of the 2020 bushfire season, we now have continual flooding; war overseas; another wave of the dreaded virus. Sometimes, it's a little bit too much.

But, when the world outside seems to be falling down around your ears, you can always read a book. It will remind you of worse things you could be enduring, or show you that others have survived the same before, or perhaps transport you to somewhere entirely more pleasant, at least for a while.

Here are ten such books which were real standouts during my 2022 reading. In 2022, I was still drawn to strong female characters, but I was also looking for humour, and a touch of lightness. I discovered a genre that I like to call 'Sad Girl Books', which is an emerging set of novels about 20 and 30 something women trying to figure it all out, without necessarily being 'chick lit'. Often these novels explore themes of mental health, and deviating from the expected patterns of life that are considered 'normal'. Think Sorrow and Bliss if you're not sure what I'm talking about. There are less short story collections this year, and more historical fiction. I also seem to have really enjoyed books with green covers! 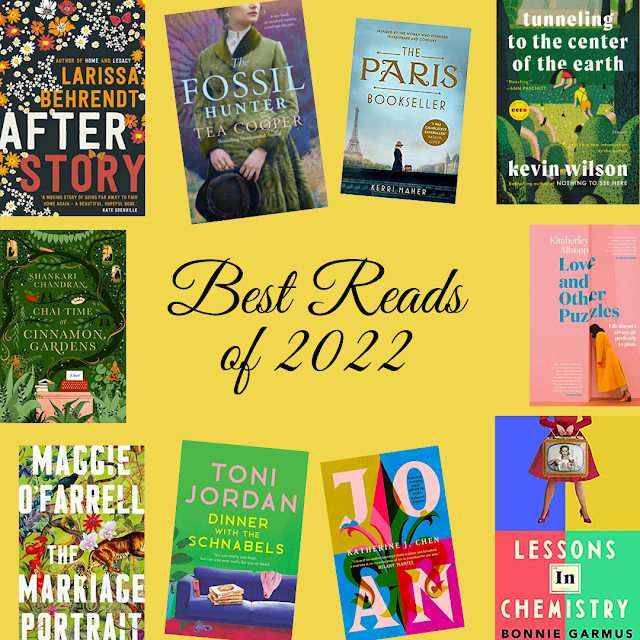 So, in no particular order, here they are:

Lessons in Chemistry by Bonnie Garmus

Chemist Elizabeth Zott is not your average woman. In fact, Elizabeth Zott would be the first to point out that there is no such thing as an average woman. But it’s the early 1960s and her all-male team at Hastings Research Institute takes a very unscientific view of equality. Except for one: Calvin Evans; the lonely, brilliant, Nobel–prize nominated grudge-holder who falls in love with—of all things—her mind. True chemistry results.But like science, life is unpredictable. Which is why a few years later Elizabeth Zott finds herself not only a single mother, but the reluctant star of America’s most beloved cooking show Supper at Six. Elizabeth’s unusual approach to cooking (“combine one tablespoon acetic acid with a pinch of sodium chloride”) proves revolutionary. But as her following grows, not everyone is happy. Because as it turns out, Elizabeth Zott isn’t just teaching women to cook. She’s daring them to change the status quo.

Girl. Warrior. Heretic. Saint? A stunning secular reimagining of the epic life of Joan of Arc, in the bold tradition of Hilary Mantel's Wolf Hall1412. France is mired in a losing war against England. Its people are starving. Its king is in hiding. From this chaos emerges a teenage girl who will turn the tide of battle and lead the French to victory, an unlikely hero whose name will echo across the centuries.

Dinner with the Schnabels by Toni Jordan

Things haven't gone well for Simon Larsen lately. He adores his wife, Tansy, and his children, but since his business failed and he lost the family home, he can't seem to get off the couch. Simon is permanently unemployed and permanently unshaven.His larger-than-life in-laws, the Schnabels - Tansy's mother, sister and brother - won't get off his case.To keep everyone happy, Simon needs to do one little job: he has a week to landscape a friend's backyard for an important Schnabel family event.But as the week progresses, Simon is derailed by the arrival of an unexpected house guest. Then he discovers Tansy is harbouring a secret. As his world spins out of control, who can Simon really count on when the chips are down?

The Marriage Portrait by Maggie O'Farrell

Florence, the 1550s. Lucrezia, third daughter of the grand duke, is comfortable with her obscure place in the palazzo: free to wonder at its treasures, observe its clandestine workings, and to devote herself to her own artistic pursuits. But when her older sister dies on the eve of her wedding to the ruler of Ferrara, Moderna and Regio, Lucrezia is thrust unwittingly into the limelight: the duke is quick to request her hand in marriage, and her father just as quick to accept on her behalf.Having barely left girlhood behind, Lucrezia must now make her way in a troubled court whose customs are opaque and where her arrival is not universally welcomed. Perhaps most mystifying of all is her new husband himself, Alfonso. Is he the playful sophisticate he appeared to be before their wedding, the aesthete happiest in the company of artists and musicians, or the ruthless politician before whom even his formidable sisters seem to tremble?

Love and Other Puzzles by Kimberley Allsopp

Rory's life is perfectly predictable, ordered and on track – just the way she likes it. She walks her 12,000 steps a day, writes her to-do list, and each night she prepares her breakfast chia pods and lays out her clothes for the next day. She's doing everything right. So why does everything feel so wrong?Deep down, she knows her life and career – not to mention her relationship – are going nowhere, and so Rory, in a moment of desperation, takes an uncharacteristic step: letting the clues of The New York Times crossword puzzle dictate all her decisions for a week. Just for a week, she reasons. Just to shake things up a bit. What could possibly go wrong?

Tunnelling to the Centre of the Earth by Kevin Wilson

Kevin Wilson's characters inhabit a world that moves seamlessly between the real and the imagined, the mundane and the fantastic. "Grand Stand-In" is narrated by an employee of a Nuclear Family Supplemental Provider—a company that supplies "stand-ins" for families with deceased, ill, or just plain mean grandparents. And in "Blowing Up On the Spot," a young woman works sorting tiles at a Scrabble factory after her parents have spontaneously combusted.Southern gothic at its best, laced with humor and pathos, these wonderfully inventive stories explore the relationship between loss and death and the many ways we try to cope with both.

The Paris Bookseller by Kerri Maher

When bookish young American Sylvia Beach opens Shakespeare and Company on a quiet street in Paris in 1919, she has no idea that she and her new bookstore will change the course of literature itself.Shakespeare and Company is more than a bookstore and lending library: Many of the prominent writers of the Lost Generation, like Ernest Hemingway, consider it a second home. It's where some of the most important literary friendships of the twentieth century are forged--none more so than the one between Irish writer James Joyce and Sylvia herself. When Joyce's controversial novel Ulysses is banned, Beach takes a massive risk and publishes it under the auspices of Shakespeare and Company.

The Fossil Hunter by Tea Cooper

Australia, 1847. The last thing Mellie Vale remembers before the fever takes her is sprinting through the bush with a monster at her heels—but no one believes her. In a bid to curb Mellie’s overactive imagination, her benefactors send her to visit a family friend, Anthea Winstanley. Anthea is an amateur paleontologist convinced she will one day find proof that great sea dragons swam in the vast inland sea that covered her property millions of years ago. Mellie is instantly swept up in the dream.1919. Penelope Jane Martindale arrives home from the battlefields of World War I intent on making peace with her father and commemorating the deaths of her two younger brothers in the trenches. Her reception is disappointing. Desperate for a distraction, she finds a connection between a fossil at London’s Natural History Museum and her brothers’ favorite camping spot—also the last place they were seen before falsifying their ages to join the army. But the gorge has a sinister reputation: seventy years ago, several girls disappeared from the area. So when P. J. uncovers some unexpected remains, the past seems to be reaching into the present. She’s determined to find answers about what happened all those years ago . . . and perhaps some closure on the loss of her brothers.

Welcome to Cinnamon Gardens, a home for those who are lost and the stories they treasure.Cinnamon Gardens Nursing Home is nestled in the quiet suburb of Westgrove, Sydney – populated with residents with colourful histories, each with their own secrets, triumphs and failings. This is their safe place, an oasis of familiar delights – a beautiful garden, a busy kitchen and a bountiful recreation schedule.But this ordinary neighbourhood is not without its prejudices. The serenity of Cinnamon Gardens is threatened by malignant forces more interested in what makes this refuge different rather than embracing the calm companionship that makes this place home to so many. As those who challenge the residents’ existence make their stand against the nursing home with devastating consequences, our characters are forced to reckon with a country divided.

After Story by Larissa Behrendt

When Indigenous lawyer Jasmine decides to take her mother Della on a tour of England's most revered literary sites, Jasmine hopes it will bring them closer together and help them reconcile the past.Twenty-five years earlier the disappearance of Jasmine's older sister devastated their tight-knit community. This tragedy returns to haunt Jasmine and Della when another child mysteriously goes missing on Hampstead Heath. As Jasmine immerses herself in the world of her literary idols – including Jane Austen, the Brontë sisters and Virginia Woolf – Della is inspired to rediscover the wisdom of her own culture and storytelling. But sometimes the stories that are not told can become too great to bear.

I'll link a few of my favourite WA based independent bookshops here if you're interested in checking any of these out. And of course, as a librarian, it would be remiss of me to not mention that you can also source these from your local library!

Have you read any of these, or did you have a favourite that didn't make this list? Tell me all about it in a comment down below. My TBR is ever-growing, with your help.