The Perth Writers' Festival took place this month, between the 19th and the 22nd of February, and boasted such guests as Dr Bob Brown, Elizabeth Gilbert, DBC Pierre and Liane Moriarty.  Over three full days and four nights, the UWA campus was transformed into a hub of ideas.  44 000 writers, readers, families, publishers and other interested patrons swarmed in and out of lecture theatres to listen to panels on diverse topics such as grief, movie adaptations and even the influence of fairy tales on our storytelling culture.  As always, this was an enriching experience, and the Festival organisers truly outdid themselves. 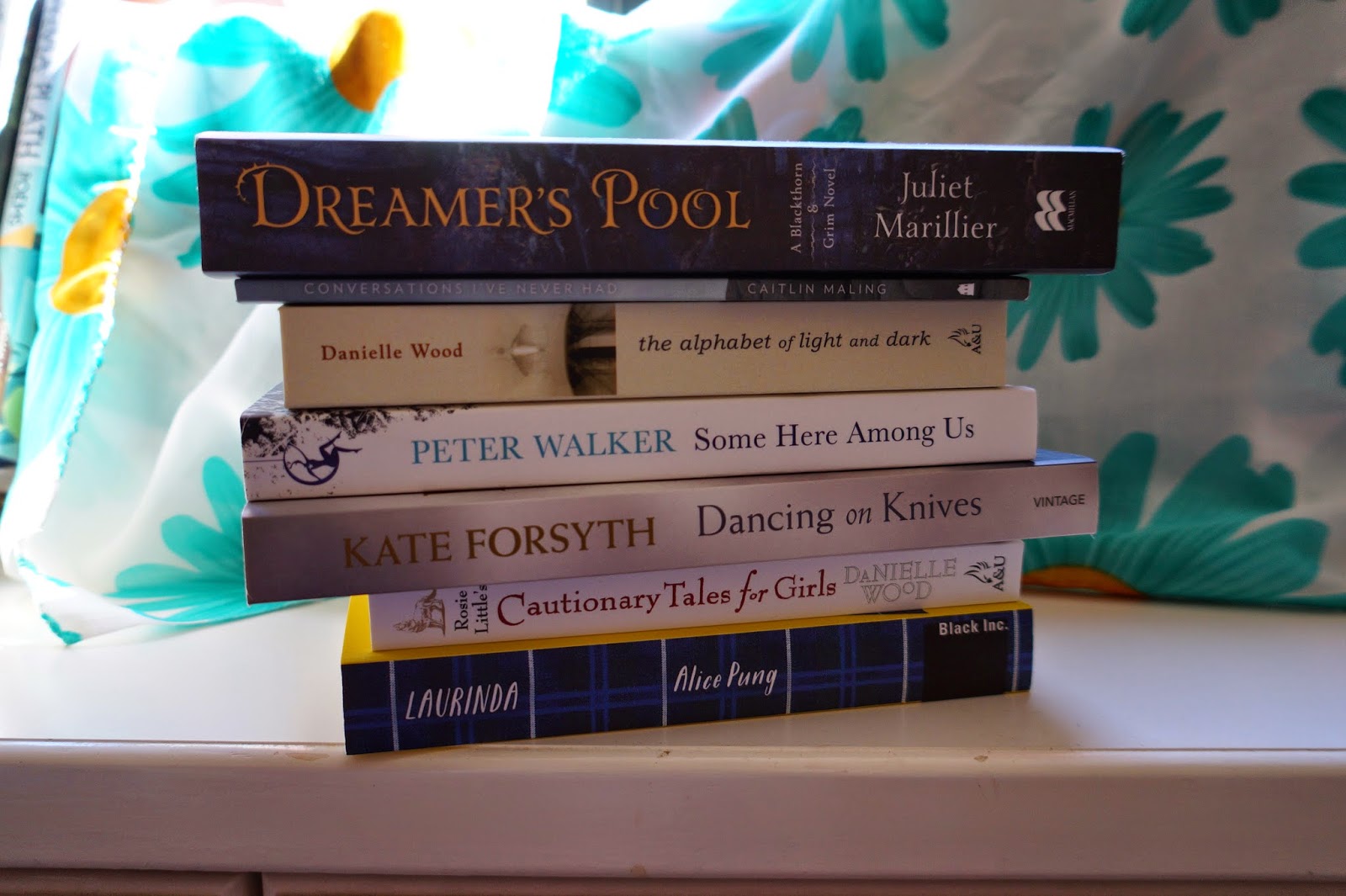 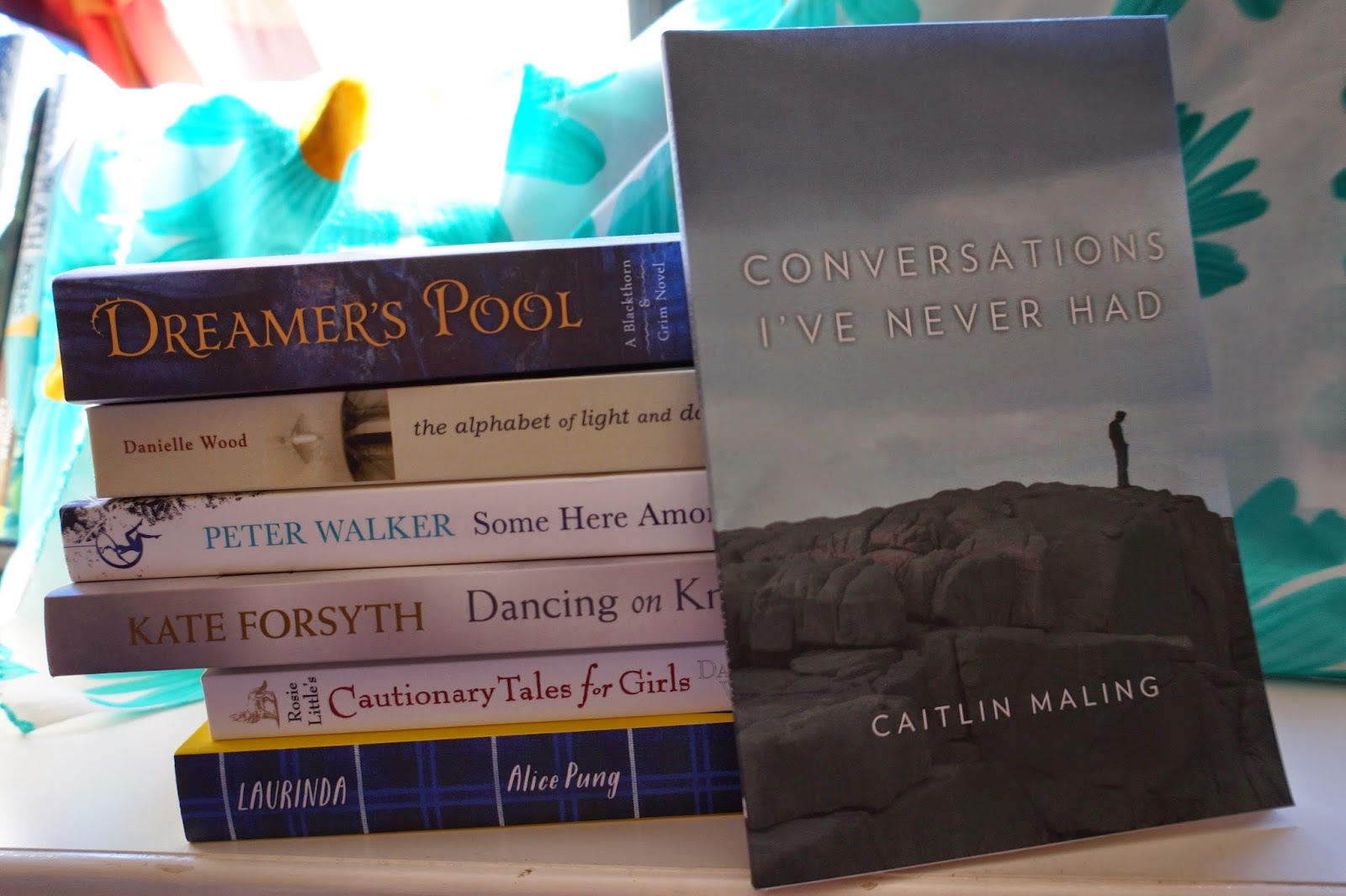 On Friday, I took in a number of fantastic sessions, beginning with a session all about Fairy Tales.  The session panel consisted of Kate Forsyth, who is the author of an enormous number of books across several genres, and Danielle Wood, who won the Vogel Award in 2002.  I have been a fan of Kate's work since The Starthorn Tree was published, and losing my copy of that book when we moved house was possibly one of the most traumatic things about leaving my childhood home.  (Okay, so I've led a pretty good life...)  Recently, I have read two of the three adult novels that Kate Forsyth has published, Bitter Greens, which is a historical novel exploring the origins of the Rapunzel story, and The Wild Girl, a novel which celebrates the creation of the Grimm's Fairy Tales, and the young women who helped with the collection of the stories, most notably Dortchen Wild who would later marry Wilhelm Grimm.  Both of these novels are beautiful, and impossible to put down.  They celebrate real women whose voices have been silenced, and the roles they played in creating the fairy tales that children still love today.  (In Bitter Greens, the storyteller is Charlotte Rose De La Force, who was banished from the court of the Sun King, Louis XIIIV).  Kate's next book, The Beast's Garden, should be out this year some time, and I know I will be buying a copy for sure.

Kate's work and Danielle's work, though very different, were extremely complementary, as both writers had studied the traditional fairy tales and their themes at some length whilst working on their projects, and had revisited the themes many times before,  Danielle's book, Mother's Grimm was reviewed here earlier in February.

What I think is remarkable is the way that fairy tales have meant different things at different times in different places and to different people, yet they continue to stay relevant to our lives, and give us an overarching sense of meaning to interpret what happens to us.  The influence of fairy tales is a powerful motif, and I think I would like to explore using fairy tales in my own work, as well as read the original Grimm's fairy tales, dark as they may be.  This session was a highlight of my weekend. 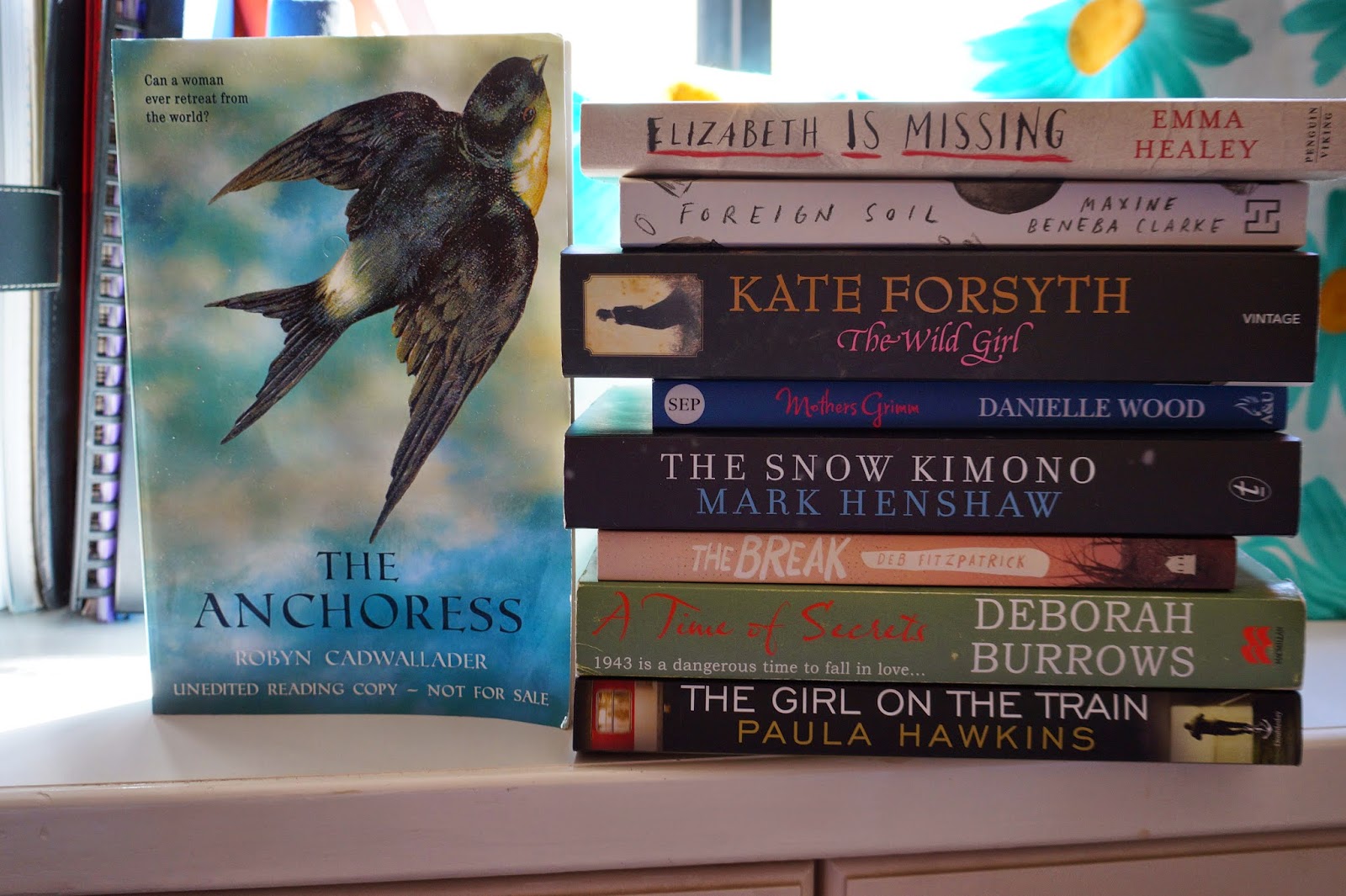 Another highlight of the Friday sessions was seeing John Marsden speak about his new book for adults, South of Darkness.  While I'm not particularly interested in Australian colonial history, I am interested in John, and I have to say, his tale of a young orphan transported to NSW is a fantastic read.  I have been a fan of John Marsden since 2002, when I picked up a copy of Tomorrow, When the War Began at what was then the Angus and Robertson store in the High Street Mall, in Fremantle.  While we were shopping, I remember we ran into my netball coach, who was skeptical about my ability as an 11 year old to read the book, considering her own daughter was studying the book for year 9.  But I read it, and I loved it, and I remember a lot of my close friends were reading it too.  Perhaps I took up the book just to keep up with them (it was a time of some social unrest in my friendship group), but whatever the reason, I loved it, and this weekend, as I sat in Winthrop Hall, listening to John Marsden speak about his philosophies of writing and teaching, and the importance of taking risks and experiencing things, I felt myself brimming with tears and thinking, "This man is the reason why I write."  I saw John speak again on the Sunday morning, in conversation with Rohan Wilson about ways of writing about the convict era, and I was so glad I decided to do that.  I will definitely be picking up some of Rohan's books to read in the future.  I may even already own one! 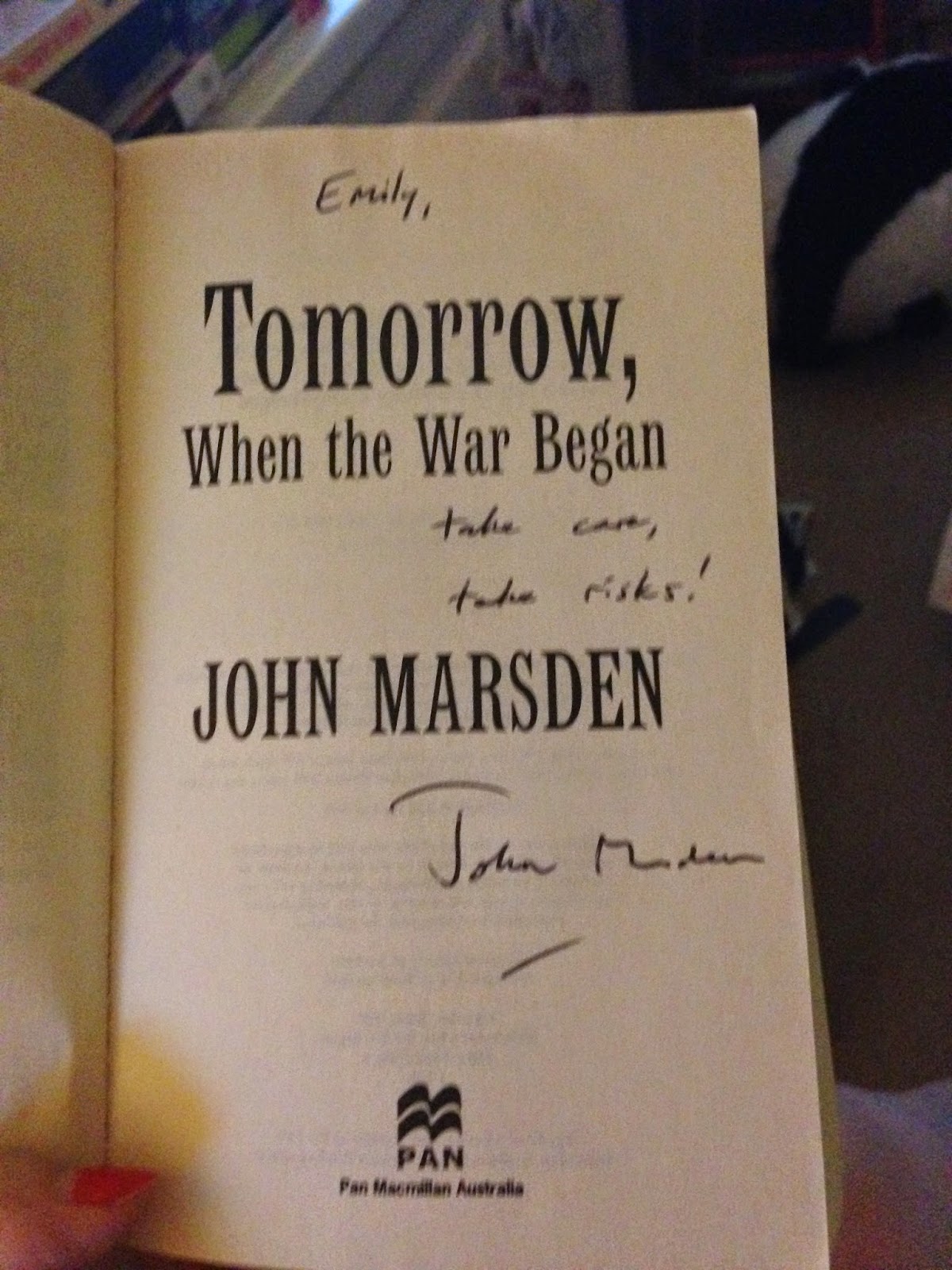 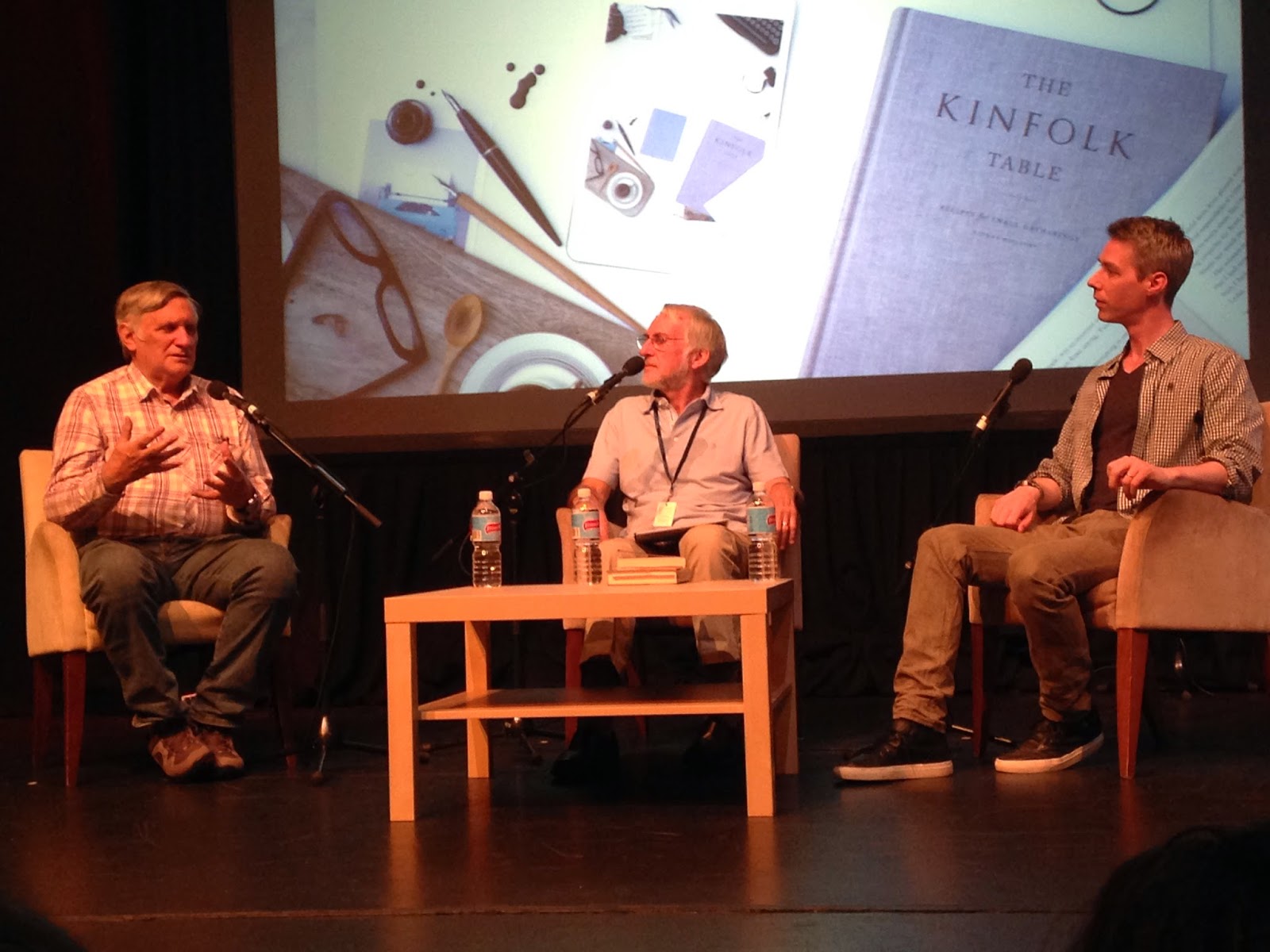 The other sessions that I went to on Friday included a talk by Porochista Khakpour about writing her novel The Last Illusion (TBR) and one by Inga Simpson and Emily Bitto about writing about memory.  I loved Emily Bitto's book The Strays, which I read whilst on writing retreat, and Inga Simpson's two books, Nest and Mr Wigg are beautiful blends of nature writing and fiction.  As for Khakpour?  I think I may have something of a crush on that woman's mind, and I can't wait to read her book. 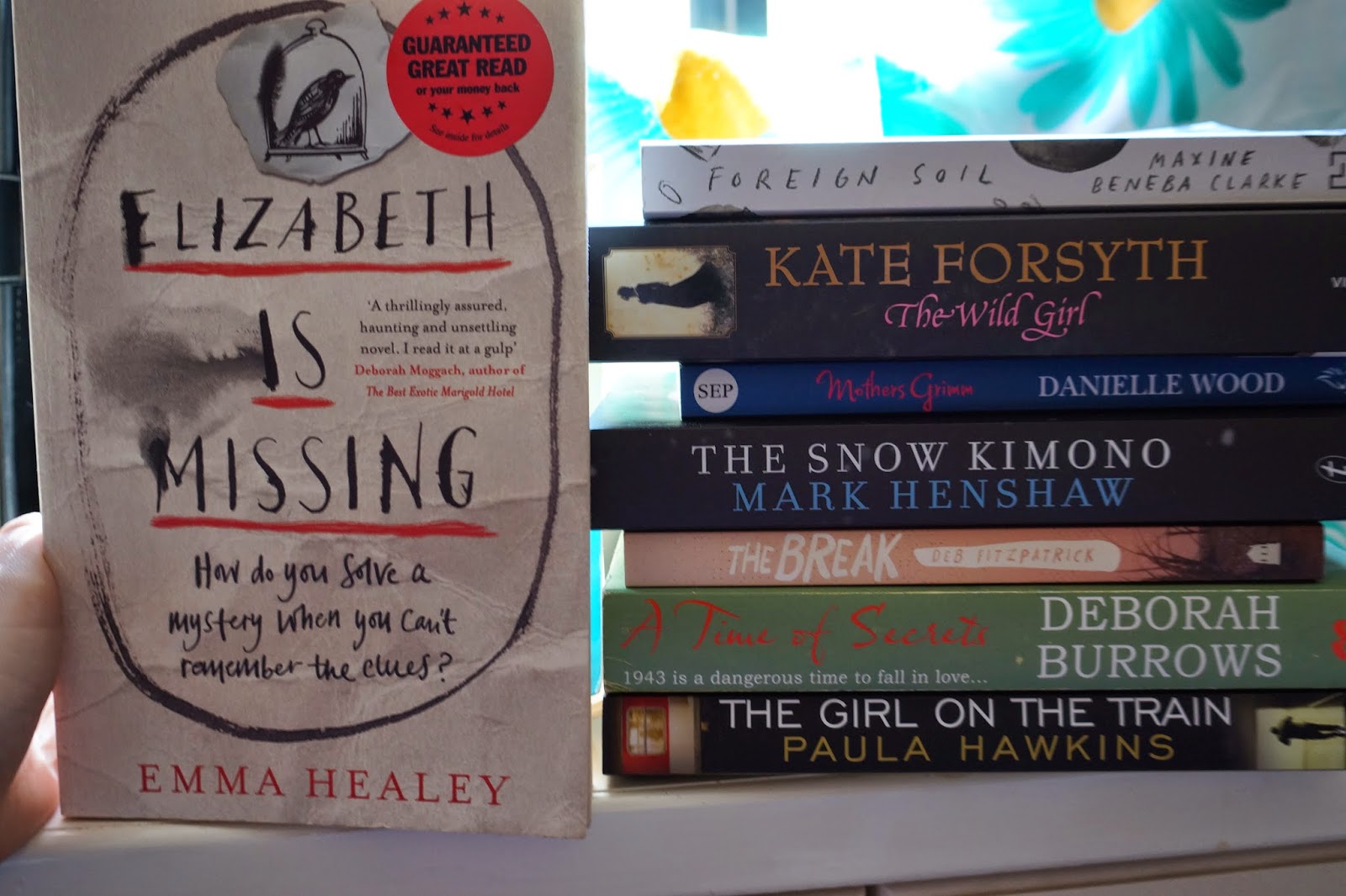 That night, I went home and for the first time in a few weeks, I wrote something new.  It was like having a big metal clamp lifted from between my shoulder blades, and the anxiety I had been carrying with me for weeks seemed to melt away.  Writing truly is better than therapy.  I spent the rest of that night reading Elizabeth is Missing, by another PWF guest, Emma Healey, whom I did not get to see speak.  Sadly there were a lot of timetable clashes to contend with and I also missed out on seeing DBC Pierre. 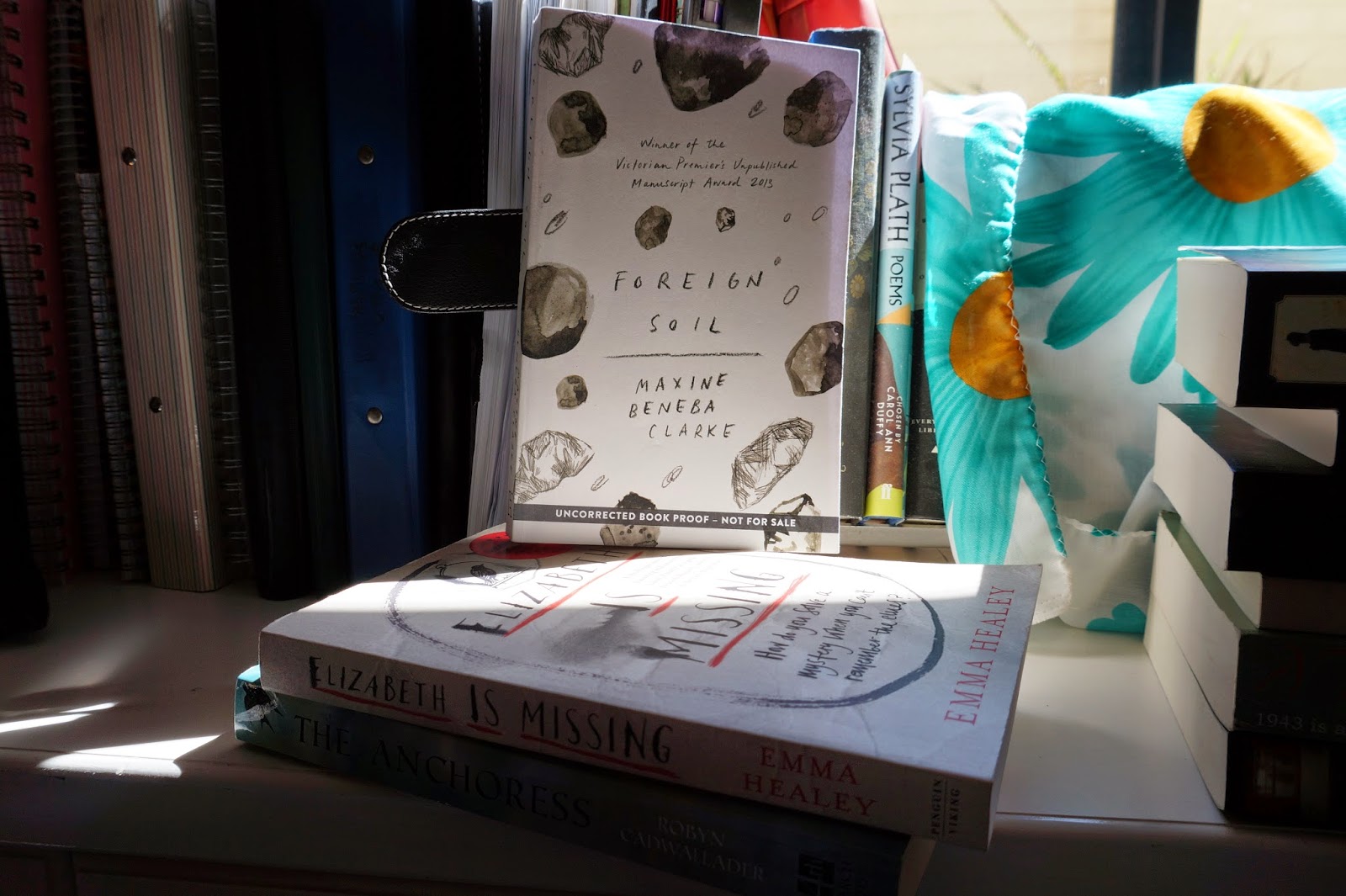 Saturday morning was taken up by a breakfast presentation put on by the wonderful people at Fremantle Press, at which we were given a teaser about what's to come in 2015.  From there, I went on to a session sponsored by the Stella Prize, entitled Domestic Double Standards, all about correcting inherent gender (and other) biases in Australian fiction.  Fortuitously, all the panellists have been longlisted for this year's Stella Prize, and I have to say that I would not want to be the one having to make that choice, as all the books are wonderful.  This panel was chaired by Stella Prize pioneer Aviva Tuffield, and consisted of Maxine Beneba Clarke, Alice Pung and Ceridwen Dovey.  All three women are smart and witty and this made for a delightful, though provoking session, at which a lot of fun was poked at the writer Karl Ove Knausgaard, whose long memoir novels featured as a symbol of cultural gender bias.  Dovey has written an article about her issues with what the cultural celebration of these books means for The Monthly which you can read here.  She levelled a statement to the audience, stating that if a woman had written Knausgaard's books, would she be labelled selfish, or unkind the way that Helen Garner had been criticised for her unorthodox and perhaps 'unwomanly' treatment of her dying friend in The Spare Room.

I also went to a session that day about the different types of short fiction currently making a resurgence in Australian literature.  This panel was chaired by Laurie Steed, who is currently the writer in residence at KSP.  Laurie is an award winning short fiction writer and teaches workshops that I am desperate to get along to, but the timing never seems right.  It was great to see him lead this panel.  He was joined by flash fiction writer, Angela Meyer, short story writer and teacher Susan Midalia, David Unaipon Award Winner Ellen van Neerven, and slam poet/ short fiction writer Maxine Beneba Clarke.  All four writers have demonstrated a great degree of flair in the short form of writing, and do not view short fiction as a stepping stone to getting a book published, the way some writers do.  They discussed the increasing willingness of publishers to embrace short fiction and the benefits that this has for readers and writers.  As someone who writes (albeit quite poor) short fiction, I found this session fantastic.  Oddly enough, during question time, a woman did put her hand up to tell a story about how she'd accidentally bought a book of short stories that morning, thinking it was a new novel by Hilary Mantel, and her disappointment.  Considering she'd just sat through a session where the panellists dispelled the idea that short stories are the novels' poorer cousin, I sort of wondered what she was getting at there.  Oh well.  As some of you may be aware, the comment disguised as a question is standard fare at Writers' Festivals. 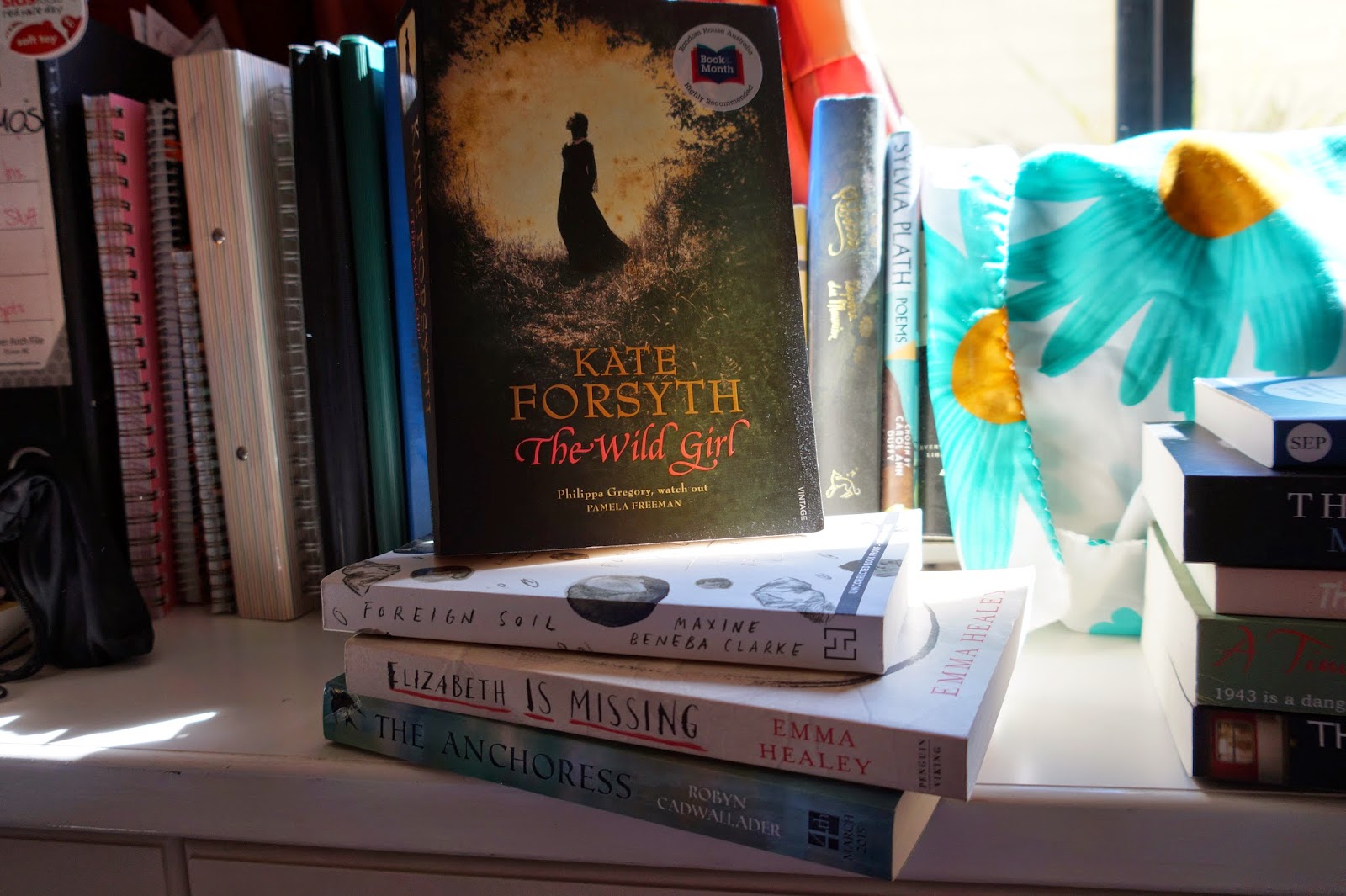 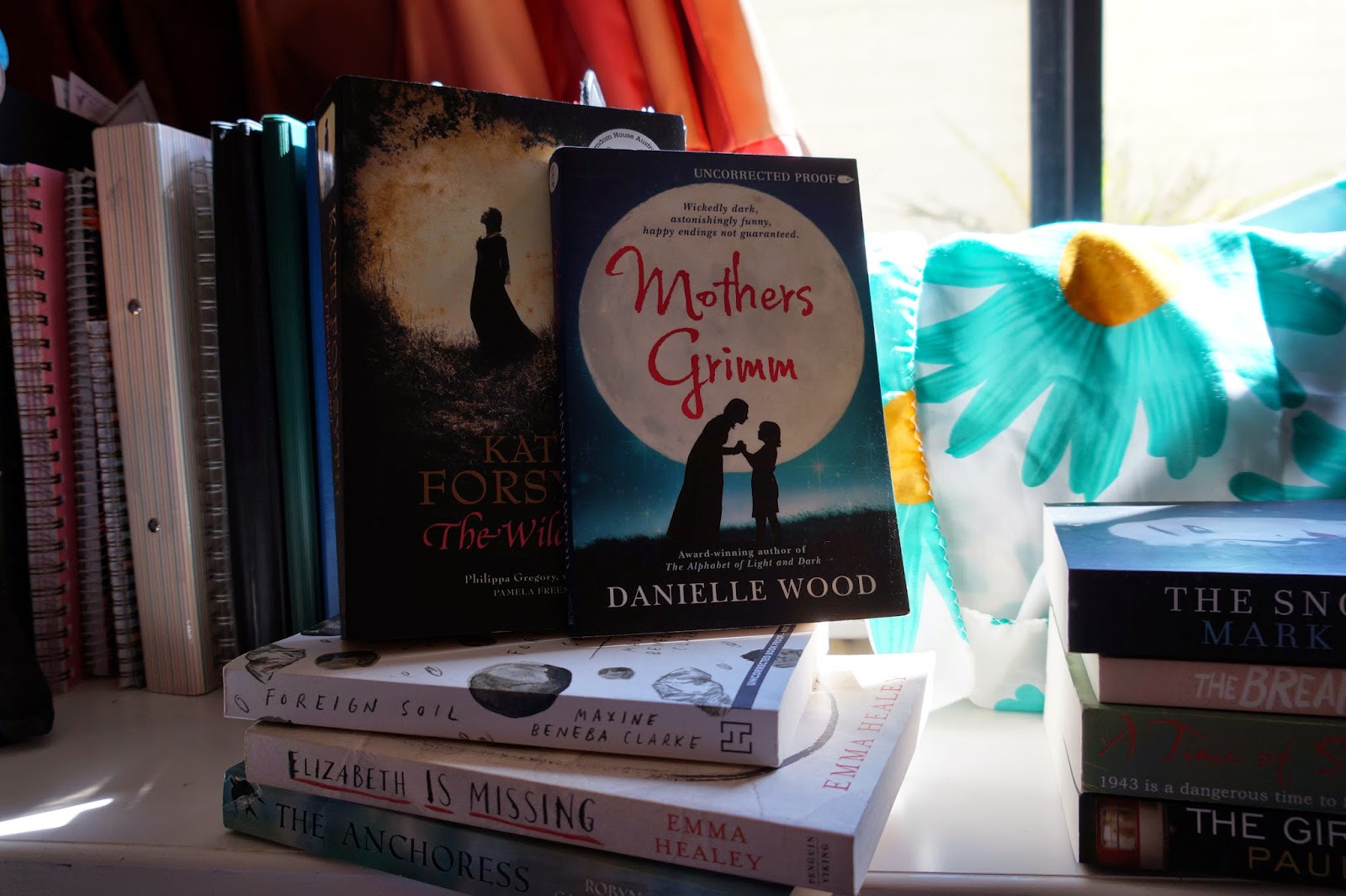 I ended my weekend by taking in a session called Drawing From History, which was incredibly packed given that it took place at 4pm on the last day of the festival.  Chaired by Natasha Lester, this session was all about books which use a historical starting point for their creation, and it featured four panellists who worked in quite different genres, beginning with Joe Abercrombie whose novels Half the World and Half A King are set in a fantasy world based on the Viking era.  I've never read any of Joe's books, I'm sorry to say, but he did make them sound funny and exciting and quite realistic in terms of world building.  His main character in this series appears to be a young king with a disability trying to make his way in a warrior culture, which sounds like a damn good premise to me.  The other panellists were Kate Forsyth, who I mentioned earlier, Juliet Marillier, local author of a great number of historical novels featuring magic and folklore, and Robyn Cadwallader, author of The Anchoress.  This session was rowdy, and funny, and Kate kindly informed us all about women's toilet habits in the court of the Sun King, as well as the fact that Napoleon's ... er... member.... was cut off after his autopsy and handed down through generations as a kind of trophy.  This session was a really nice way to end a great weekend, and kudos must go to Natasha Lester for doing such an amazing job facilitating it.

Sadly, the Writers' Festival is over for another year, and I must spend my time thinking back fondly on it, and wishing, and perhaps also reading some of those books that I bought.  A round of applause to the organisers and writers who participated.

If you are a huge fan of events like the Perth Writers' Festival, you may be dismayed to hear that the WA State Government has cut $65 000 worth of funding to the WA Premier's Book Awards, and changed it to a biannual format.  A petition has been set up in an effort to show the Premier that this is not okay with the WA writing community.  Please consider signing.  You can also tweet using the hashtag #savethewapremiersawards