April was a slow reading month for me, not just because I finally finished Middlemarch by George Eliot.  I also managed to get a nasty cold, and while in theory this would have made for lots of reading in bed, in reality it made for lots of sleeping and watching Criminal Minds.

When I say a slow month, I still managed to dispense with six books, which isn't a number to sniff at.  But it's still the farthest off my ten books a month target that I've been so far this year, and so hopefully next month will prove more fruitful.  (I would, however, be happy to read no books at all in May, if only I was writing!) 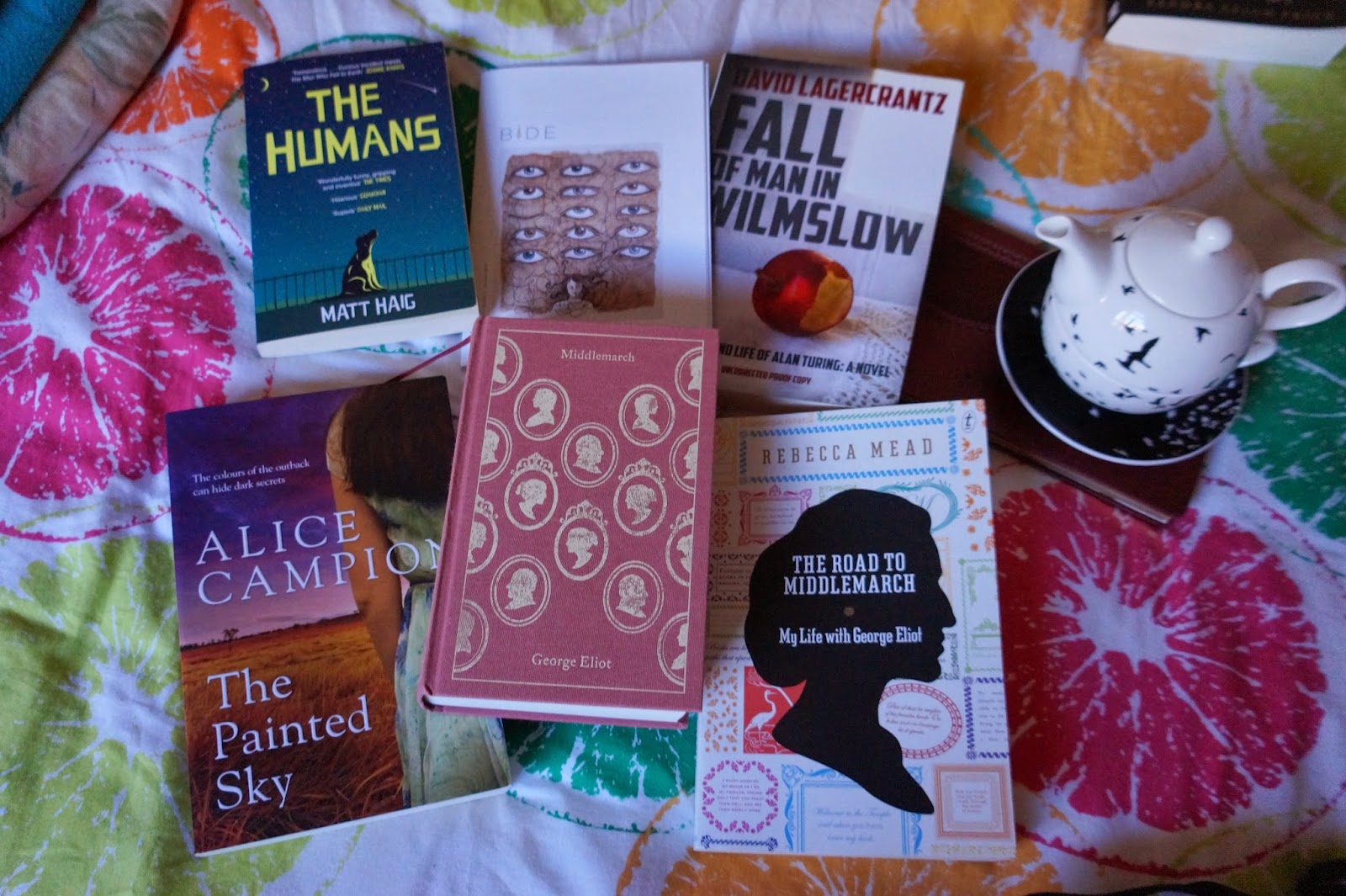 The Painted Sky by Alice Campion

I reviewed this book early in the month, thanks to Random House who sent me a copy for review.  I don't usually read rural romance, despite it being one of the fastest growing genres in Australian fiction, but I was pleasantly surprised by this compelling book.  You can read my review here.

The first classic I have read in a long time, Middlemarch took me almost twelve months to read, a fact I am not necessarily proud of.  In the end, I was rewarded by an understanding of George Eliot's biting social wit.  You can read my review, including a review of the next book I read as a companion, here.

The Road to Middlemarch by Rebecca Mead

A bibliomemoir blending personal recollections with a history of George Eliot's life and an analysis of her novels, I would not have fully understood Middlemarch without this book to follow it, and thanks to Mead's enthusiastic words, I am now keen to make a start on The Mill on the Floss.

The Humans by Matt Haig

There is a lot of buzz surrounding Matt Haig's new book, How to Stay Alive, but I decided that I wanted to start with his fiction, and so I borrowed a copy of The Humans from a friend.  It is a novel about an alien who is sent to Earth in the guise of a mathematician in order to smother the knowledge of solving an equation which would give the human race far too much technological advancement.  However, living his life as this man, he gets to know and love his new family, and must choose between fulfilling his mission or following his heart.  I loved this novel.

An exquisitely packaged, home-spun flash fiction zine, Bide is full of tasty morsels of excellent writing.  I inhaled this the very day I opened the envelope it came in.  I even read some of it aloud to my mother.  You should definitely subscribe to this up and coming literary magazine.

The Fall of Man in Wilmslow by David Lagercrantz

This translated novel about a police detective investigating the suicide of Alan Turing looked promising for several reasons, including its historical subject matter, about which I intend to write myself.  However, whether the translation was poor or the writing was overblown to start with, this proved to be a fairly painful read and I couldn't make myself finish it.  It bodes badly for the upcoming fourth book in the Millennium series, which Lagercrantz has been commissioned to write.  I do hate to write a bad review...


That's all for me this month! What have you been reading?  Have you read any of these titles?  Let me know in the comments.
Labels: alice campion anna spargo-ryan bide magazine david lagercrantz george eliot matt haig middlemarch reading roundup rebecca mead the fall of man in wilmslow the humans the painted sky