I read six books during October, and for once I have no excuse for not reaching ten, although the first three books were rather large as you will see in a moment.  After a month of rather dark reading material in September, I decided to start with something light, so I went to my favourite cheer-up author, Marian Keyes.  This month I also got to read a new book from one of my all time favourite writers (Kate Morton), and I read my very first Sarah Waters book.  It won't be my last. 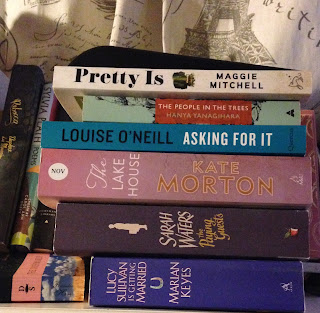 Lucy Sullivan is Getting Married by Marian Keyes

Funny, cheeky and peopled with interesting sorts, Marian Keyes was the perfect remedy to my dark month of reading in September.

The Paying Guests by Sarah Waters

In the years between the wars, Frances and her mother are forced to take in paying guests in order to keep their family home.  The couple who move in are from a different class, and their presence introduces a new chaos to Frances's life.

Sarah Waters was longlisted for the Baileys Women's Prize for this book, and it's no surprise.  While some of the reviews for this book online would lead you to believe that the novel is only interesting for its salacious sexual intrigue, it is a clever, well-researched and well-plotted book and I enjoyed it very much.

The Lake House by Kate Morton

I love Kate Morton novels and this was a great new addition to her repertoire.  You can read my review here.

Asking for It by Louise O'Neill

This book comes with a serious trigger warning.  Louise O'Neill's writing is sharp and visceral but her subject matter in this book is darker even than in her dystopian debut, Only Ever Yours, which I read a while back.  It is the story of Emma, a thoroughly unsympathetic (and yet sometimes likeable) 'mean girl' type character, who we see judging people, being horrible to her friends and family, being vain and greedy and a little promiscuous for the first part of the novel.  One night, at a party, Emma has way too much to drink and the next morning she discovers that she has been assaulted while she was in no position to consent and the images of it are all over the internet.  She becomes 'that girl', and has to decide whether to press charges against the young men who did these things to her even though they are the town football heroes.  This is a realistic and confronting book about the mixed messages young girls get in society and a startling picture of what life is like for sexual assault and rape victims.  I think it adds an important voice to the discussion currently going on, but as I said, it comes with a giant trigger warning and it made me feel quite on edge and angry for a day or two after I read it.

The People in the Trees by Hanya Yanigahara

Yanigahara's second book A Little Life was shortlisted for this year's Man Booker and was hotly tipped as the favourite to win.  After seeing many mixed reviews online, I wasn't sure if I wanted to attempt the 800 + page housebrick of doom and despair in late 80s New York.  While out and about, I discovered this earlier novel, the story of a young doctor who goes on an anthropological expedition to a Micronesian island and discovers what may be the key to immortality.  His discovery has terrible consequences.  This novel is beautifully written and the voice is compelling, but the novel strays into some serious moral grey area, and the narrator's attempts to mitigate the impact of this definitely messes with the flow of the end of the novel.  I still have mixed feelings about whether or not I liked this book and I am inclined to say I did not, if only because the final revelation made me feel betrayed.

Pretty Is by Maggie Mitchell

I just reviewed this one yesterday, so you can read that here, but suffice to say I very much enjoyed ending the month with this novel.
Labels: Kate Morton louise o'neill marian keyes pretty is reading roundup sarah waters the lake house the paying guests the people in the trees