So here's a piece of writing wisdom I never expected to pick up:

Sometimes, you have to write it like a midday soap opera.

I don't mean that your book should read like one.  I'm talking about in your early drafts, or perhaps in your middle-of-the-process revisions.

I'm currently working on the eleventh or twelfth iteration of my historical novel, Between the Sleepers.  The last time I rewrote it, I thought it was done.  I thought it was the best that it was ever going to be.  I'd taken it to a residency at the Katharine Susannah Prichard writers centre, where I'd reworked 40000 words in ten days and gone home feeling like a superhero.  I'd had a feeling in my gut that the book was as done as it was ever going to be.

And I pitched it to a few agents, some of whom even read the whole thing.  It was close.  But it wasn't getting over the line. 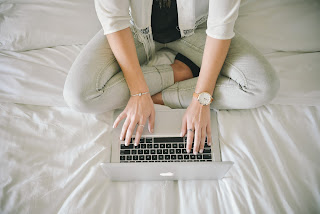 Readers, I took a year off from that novel.  It was probably the largest amount of time I'd ever had of not thinking about it since I started working on it back in 2008.

This year, I engaged an amazing local writer to mentor me through the process of revising the novel one more time.  And when I reread my work alongside her comments, I was shocked and embarrassed by the dross on the page before me.

This wasn't the amazing novel that I thought I had written.  This was a script for some soap opera with mistaken identities and identical twins swapping places, and characters being lost at sea for long periods of time only to return at the exact moment their ex-wife was about to marry another man.  (Or whatever actually happens on soap operas, who even knows...)  I had poured everything I had into that novel.  Every big word I knew, every romantic gesture, every seemingly deep thought.

And I had overdone it.

There were a few big factors in the overdoing it recipe.  First of all, I obviously felt the need to describe every little gesture or facial expression my characters had.  It was constant.  And I was taking away from the things that they said and did.

Second of all, my characters spent a lot of time spitting.  Spitting with rage, spitting their words, swallowing their spit when they were nervous.  And as my mentor rightly pointed out, it was a bit uneccessary and more than a little gross.

But the third and most unforgivable sin in this draft of mine was that I felt the need to make my characters go through the entire spectrum of human emotions time and time again when there just wasn't any need for it.

So.  This time around, I sat down and I wound back my novel.  And this weekend, I've realised something very important.

I needed to take my book through that woefully overwritten soap opera phase in order to get to the stage I am at now.  I could not have realised my characters' emotional journeys in the way that I have unless I made them wildly overemotional first, and then wound everything back.   What I now have is an almost complete book that I have been excited to rediscover.  It is a book that I understand better now, and I understand myself better as its writer.  (Corny, I know.)  I have learned through this process that one year ago, I was simply done with this novel.  But when I finish my novel this time around, I will have a book that I am proud of.  A book that I know will be some of the best writing I have ever done.

I almost don't want the process to be over.
Labels: australian fiction between the sleepers historical fiction my writing writing